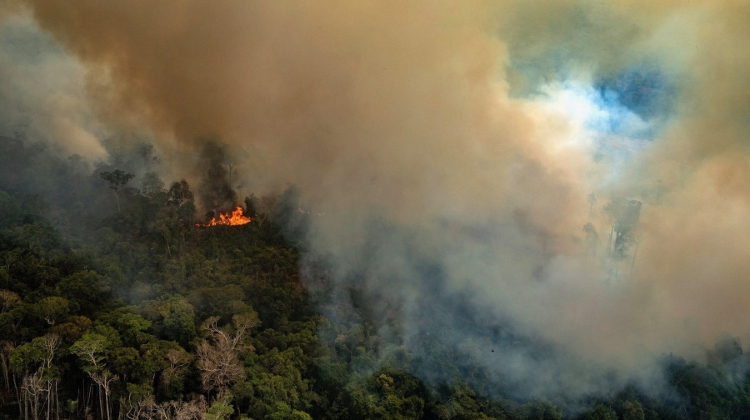 Pundits in weeklies right across the political spectrum discuss the Amazon rain forest fires alongside issues of national sovereignty.

168 Óra’s Győző Mátyás acknowledges that some of the fears over the Amazon rainforest fire are overblown, but he thinks nonetheless that such global attention serves a good cause.

The left-wing commentator recalls that some of the photos shared over social media had nothing to do with the current wildfires, and that claims concerning the actual impact on the global climate of the Amazonas forests’ were exaggerated.

The hype over the fires nonetheless raised attention to the ‘most burning problem’ of our time, Mátyás claims. The Brazilian famers who burn the forest in order to win more agricultural land have legitimate claims over the territory of their homelands, he writes, but on the other hand, such sovereignty may lead to a global crisis.

Mátyás believes that focusing on national sovereignty does not help in any way to resolve the ecological and related economic problems of Brazil and the world.

In conclusion, he finds it disappointing that those whom he calls sovereignist populists dismiss NGOs and those calling for international cooperation as mercenaries of global capital and the liberal order.

In Magyar Demokrata, István Kovács, from the Center from Fundamental Rights GONGO explains what he calls the ‘global hysteria’ over the Amazon rain forest fires as a manifestation of a secular ‘ersatz religiosity’.

The pro-government analyst thinks that the apocalyptic fears provoked by the wildfires are akin to the fears that occurred after the Paris terror attacks.

He quotes statistics which appear to show that this year, the fires in the Amazon forests are no bigger than in an average year in the past decades. He accuses the Left of inflating the impact of the fires to curtail national sovereignty.

He claims that the Left has failed to weaken national sovereignty by forcing migration on nation states, and acknowledging this failure, they now try to use climate related fears for the same purpose.

Such fear-mongering, however, makes it even more difficult to find pragmatic long-term solutions to the economic and ecological challenges, Kovács concludes.

In Élet és Irodalom, Zoltán Vasali from the IDEA Institute also links the dispute over the Amazon forest fires to disputes over national sovereignty. The left-wing liberal analyst likens the current dispute over the Brazilian forest to the migration crisis, and accuses the pro-sovereignty camp of acting irresponsibly.

Vasali contends that pro-sovereignty politicians defend sovereignty even if it leads to global crises or harms the national interest. By way of example, Vasali mentions Brazilian President Bolsonaro’s rejection of international help to stop the fire, and PM Orbán’s refusal to accept Norwegian funds to support NGOs.

In an aside, Vasali notes that the Hungarian Right has by now realized that they cannot simply deny global warming and downplay ecological worries.

The Hungarian government therefore is doing its best to jump on the green bandwagon, and is even trying to rebrand green ideas as part of Christian conservative nationalist values, and promote the preservation of the national landscape.

In Mérce, Zsolt Kapelner cautions the Left against advocating national sovereignty. The alt-left blogger recalls that the idea of sovereignty has become popular on the ‘authoritarian Right’ as well as the ‘populist Left’.

Instead, he suggests, it will lead to a zero sum game between national units, and allow national governments to define the people according to their own interests and taste.

Kapelner thinks, therefore, that rather than advocating authoritarian national sovereignty, the Left should promote grassroots democratic movements which strengthen the free and equal cooperation of individuals and help them in their struggle against global capital.

Mandiner’s Gergely Szilvay, in a response to Kapelner, finds it absurd to claim that ‘the people’ is a mere construct.

The conservative pundit contends that political communities precede the existence of power, and therefore it is wrong to assume that power creates the people. Szilvay wonders if Kapelner would also agree that pro-migration arguments are also just mere reflections of political power and interest.

Szilvay thinks that Kapelner’s constructivist argument is intended to defend political projects that go against the will of the people. As an example, he mentions efforts to facilitate migration despite locals’ unwillingness to admit migrants.

Szilvay wonders how international organizations could be more democratic and representative of popular will than national governments. In conclusion, he suggests that if the Left took the principle of grassroots democracy seriously, it would advocate local subsidiarity and small local communities rather than Marxist international cooperation.

The latter, Szilvay adds, would not be any more democratic than restoring the authority of a supra-state religious authority. Instead of following the advice of international organizations, Szilvay recommends that we become more attentive to the arguments of Brazilian experts more familiar with the case.