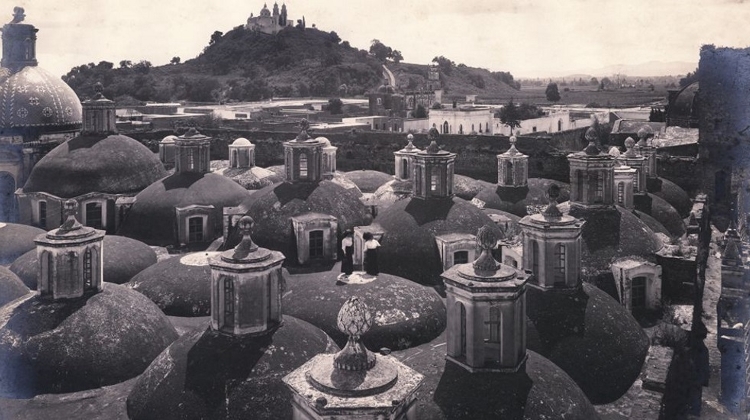 Seen until 22 September. Very few people in Hungary are familiar with the renowned Mexican photographer Guillermo Kahlo, the father of the world-famous painter Frida Kahlo, who emigrated to Mexico as a merchant, under the name of Wilhelm, from Pforzheim near Karlsruhe in 1890.

“My father, who was born the son of a Hungarian in 1871 in Baden-Baden and, after studying in Nuremberg in 1888, lost his mother at the age of 18 – and didn’t get on with his stepmother – so my grandfather, a goldsmith, gave him money for the journey to America”, Frida Kahlo is quoted as saying by her biographer, Raquel Tibol.

According to Alejandro Gomez – a suitor of Frida’s during her youth – he was a “survivor full of bitter memories. Tireless in his work, a brilliant technician who travelled the length and breadth of Mexico at the beginning of the century – he photographed churches and architectural relics as well as colonial and modern public buildings. Enough for a rich archive full of glass slides …”

The limited available written documentation bears witness to a close relationship between father and daughter, which is also evidenced by the funeral instructions enshrined in a letter sent from Moscow by Rivera in 1955: “Hang a pre-Columbian urn containing Frida’s ashes in the “Blue House” museum in Mexico City, alongside the portrait of Guillermo Kahlo”.

The portrait in question, painted in 1951 on the 10th anniversary of Frida’s father’s death, is also the source of speculation regarding the ethnicity of the Kahlo family.

Here too, as on many of the painter’s pictures, a signature text written in brushstrokes is displayed in a wide strip below the picture: “I paint my father, Wilhelm Kahlo, an artist and photographer of Hungarian descent, a larger-than-like, noble creature who courageously battled epilepsy for 60 years, never gave up working and fighting against Hitler. In adoration: his daughter, Frida Kahlo”.

Nevertheless, the Kahlo photograph used as an illustration in the summary of the Teatro Nacional’s Hungarian connections at our exhibition does have a main character, who wears a straw hat like Géza Maróti in photographs from the past.

On the brow of the triumphal arch of the Harmony group of façade statues carved by Leonardo Bistolfi, a tiny, sombrero-wearing figure is darkly visible stepping out from among the dancing marble figures, above the goddess evoking Botticelli’s Venus.

Perhaps this is the “envoy of sculpture”, who stands guard over the boundaries between the old arts and the still unclad, massive steel cupola: a philosophical, passive observer of the changing times. He glances down from above at Guillermo Kahlo and his camera – and indirectly at us, the voyeurs looking back from a distance of one hundred years.

He watches as the world forgets the classic genres, and sees how the artists themselves are struggling once more – sometimes seemingly in vain – for a truly credible identity, for contemporary and historic recognition of their work, for the creative-intellectual property rights that symbolically immortalise their personalities, for the name associated with their works.