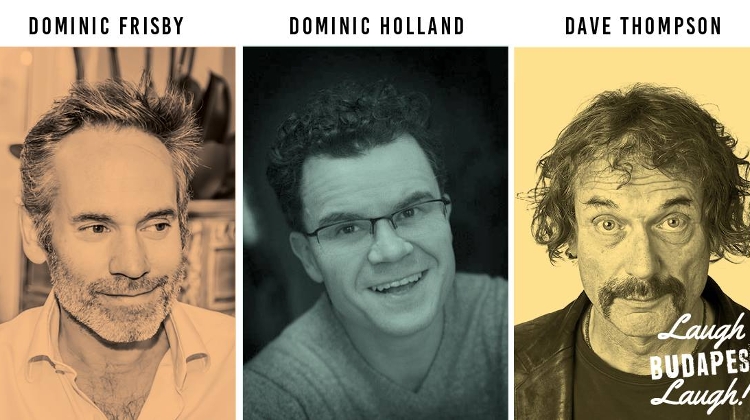 The comedic capers continue at The Studios as Laugh Budapest Laugh delivers the best of English language comedy in the city.

Dominic Frisby
The viciously funny writer-performer is the resident MC at Londonʼs oldest comedy venue, Downstairs At The Kingʼs Head. The quality of his material was uniformly outstanding there is no dull moment while he is on stage.

Dominic Holland
A professional comedian, awards host, conference host, presenter, author and after dinner speaker with vast television and radio appearances. Dominic’s quick wit and accessible material allows him to tour the UK constantly and establish himself as a firm fixture on the business entertainment circuit also.

Dave Thompson
Dave is a reincarnation of the Ancient Egyptian Pharaoh Yakbim Sekhaenre’s court jester Djedptahaufankh. He entertained the pharaoh and his family for 24 years. In 1779 BC, Dave (or Djedptahaufankh as he was then known) misjudged a joke about Pharaoh Yakbim Sekhaenre’s daughter, and was ritually disembowelled. His body was thrown to the crocodiles.
In his current incarnation, Dave played Tinky Winky, the purple Teletubby.

Get your laugh on at The Studios!

RVSP if you wish to reserve a ticket BUT please note that all tickets must be collected by 7.30pm on the night otherwise they will be allocated to the waiting list on first-come first-served basis.