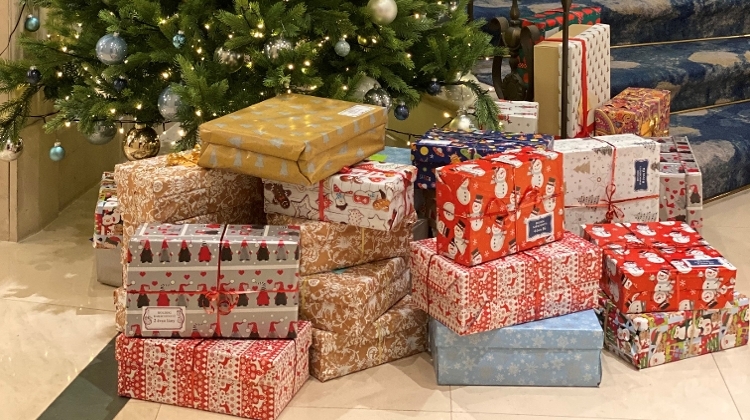 The Ritz-Carlton, Budapest is participating for the second time in the Shoe Box charity activation.

The Ladies and Gentlemen have decided that they would like to help the children in need, and show that people together are able to create wonders as part of the Community Footprint activities. Let's make a child's Christmas beautiful.

But where does the whole Shoe Box activation come from? Once upon a time, an English grandmother, after seeing the aftermath of the sunburn and feeling sorry for the children of the horrors, wrapped her gift in a shoe box and sent it to a poor child.

She couldn't have guessed that her simple, but noble deed would be followed by hundreds, thousands, millions, and that love enclosed in a shoe box would break through boundaries, ages, lifestyles, and evolve into a movement.

The Shoe Box Action (or, as it is called in its home country, England, Operation Christmas Child) reached our country a decade ago, when the children in need received packages for Christmas from Western Europe-, with the help of the Baptist Charity Service.

In 2004, the charity service launched the first independent action of our country. Initially, the action operated with a single collection point, and has now become nationwide, with the center being the Shoe Box Castle set up on Deák Ferenc Square, where the Box Fairy receives the gifts.

The enthusiasm of those involved in the program grew year by year - while the motto was initially "Happy Christmas for ten thousand children", in 2018 more than 57,000 shoe boxes were collected as part of the action. In 2019, the charity wants to cross the sixty thousand mark. For the 16th time, the organization is launching the Shoe Box Promotion, which will bring more and more boxes to children until December 19th.

As a novelty this year, boxes are being collected for those in need in two new locations, in the Netherlands and in Slovakia. Anyone who is unable to make a gift, can call  the 1355 number and able to support the charity activation with 300 HUF per phone call.

„It is a great honor to be part of this fantastic collaboration. We are excited to join The Ritz-Carlton, Ladies and Gentlemen in Budapest, to bring an unforgettable experience and joyful moments to children in need at Christmas” said Mr. Hugo Lecanda, General Manager of The Ritz-Carlton, Budapest.

The hotel collected donations until December 18, and then delivers the shoe boxes to the collection point.