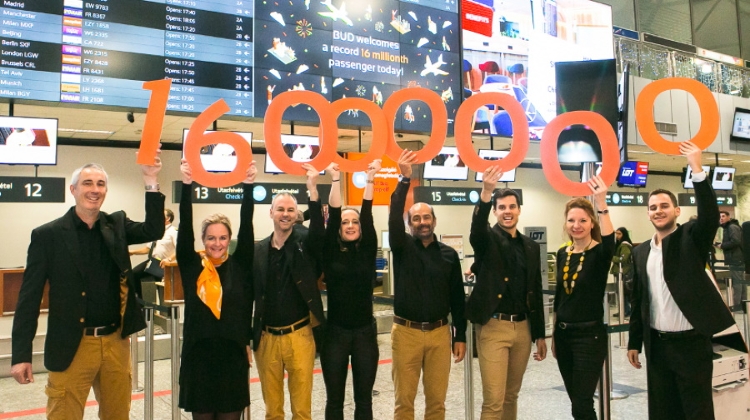 Another record has been reached; for the first time in its history, more than 16 million passengers used Ferenc Liszt International Airport in 2019.

Budapest Airport welcomed 33 new flights in the course of the year, the number of landings and takeoffs exceeded 122 000. The airport handled 135 000 tons of cargo, London remains the most popular destination. 2019 in the life of Budapest Airport in numbers.

Budapest Airport handled a total of 16 173 489 arriving and departing passengers in 2019, recording an 8.8% traffic increase compared to the previous year.

Thus, growth reached 64% over the past five years, whereby Budapest is one of the fastest-growing airports in Central and Eastern Europe. This is more than double the 4% average of European airports.

Budapest Airport handled more than one million passengers in nearly all months of 2019, and even one and a half million during the peak period,July, August and September.

London remains the most popular destination by far; every ninth passenger traveled between Budapest and the British capital. 153 airports of 135 cities in 49 countries were accessible directly from Budapest, with 49 airlines.

In the long haul segment, Asian destinations were greatly strengthened last year (meaning 50% increase in seat capacity), with new flights to Shanghai, Soul, Chengdu, Chongqing and Sanya. More than one millions seats were available on board long haul flights from Budapest in 2019.

Ferenc Liszt International Airport is a not only a strategic facility of key importance for the country, but also the aerial gateway to Hungary. Over the past two years, Budapest Airport spent more than 50 billion HUF on developments.

In 2019, new projects focused on digital innovation and the enhancing of the travel experience, for all passengers.

The security screening process has been accelerated and became more calculable,and passengers can now leave electronic items in their hand baggage during screening. Waiting time dropped below 15 minutes, even during the peaks, which is short, even by international comparison.

Carbon dioxide emissions per passenger decreased by nearly 20% in 2019 from the previous year. This is partly attributable to the airport operator’s sustainability and energy rationalization initiatives and partly to the widespread use of more modern and environmentally friendly aircraft.

Budapest Airport maintained its carbon neutral certification in 2019 for the second year running, being the first and only airport in the region to do so.

Besides the significant growth in passenger traffic, there was a modest increase in the number of landings and takeoffs. However, aircraft movements still did not reach the current record of nearly 127 000 from 2006; there were a total of 122 814 landings and takeoffs in 2019.

The reason for this is the development of aviation; nowadays, airlines operate much larger and much more modern aircraft, with much better utilization, than 10-15 years ago.

Budapest Airport handled 135 521 tons of cargo in 2019. The BUD Cargo City, constructed for 16billion HUF, commenced operation in January. Thanks to this new logistics hub, which functions as the commercial gateway of Central and Eastern Europe, the airport’s total cargo capacity could increase from 150 000 tons to 250 000 tons per year.

Biggest employer of the region

The airport is also one of the largest and most attractive workplaces in Hungary. As a major employer, it not only employs the more than 1400staff belonging to the BUD Group, but is also responsible for the more than 50 000 employees of the 220 service providers and partners operating at the airport.

Thus, Budapest Airport contributes to the livelihoods of approximately 1400 families directly and another 50,000 households indirectly.