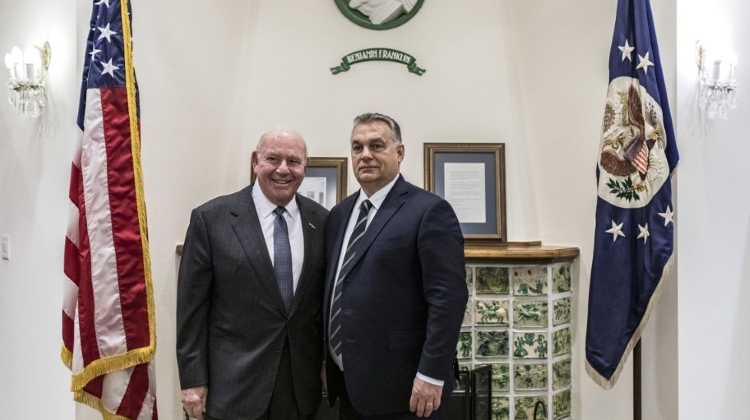 In an interview with Hungarian news portal 24.hu, David B. Cornstein, US Ambassador to Hungary, discussed his views of how the Hungarian government stands up against antisemitism, loosening ties with Russia, and that the Soros-Orbán contradiction is actually based on a personal conflict.

Cornstein, whose maternal grandparents emigrated from Hungary, said in the interview that while he is in New York, his friends always note how sorry they are for him for living in Budapest, where anti-Semitism is high.

However, he thinks that in general, Jews living in Hungary are happy and satisfied. Violence against Jews almost never occurs, whereas atrocities are common in New York. Cornstein said if the police saw something like that in Hungary, they would take action and the perpetrators would go to jail.

Regarding his personal contact with Prime Minister Viktor Orbán and Minister of Interior Sándor Pintér, he firmly states that “…they oppose any anti-Semitic rhetoric. If something like that were to happen, they would act and make sure that the perpetrators go to jail.”

He also said that in his view, the campaign against American-Hungarian financier George Soros was not due to anti-Semitism, but “…an anti-liberal campaign in a conservative-friendly environment.

The point is not that Soros is Jewish, but that he is very liberal and the Hungarian government is very conservative.”

According to Cornstein, the basis for the disagreement is the personal conflict of two people who are “on the two ends of the spectrum and both have made very condemning statements about each other. Neither of them is particularly fond of the other.”

However, in response to the statement of 24.hu that “the fight” seems unequal, the ambassador said he doesn’t think so, as “…the money the Open Society spends is an astonishing amount and goes against everything the Prime Minister thinks.

Of course, [on the other hand] it seems to work well politically that the government has sent the message that it is against George Soros. But this is Hungarian domestic politics, in which the American ambassador has no part, I’m just an observer.”

He said this is why Americans support “neither Soros nor Orbán, but rather build bilateral relationships that can deliver results and not criticize one person or the other.”

In the Ambassador’s personal opinion, this worked very well: with a 15% increase – 57% of Hungarians are thinking positively about the US today, and 70% are finding the relationship between the two countries good.

Cornstein said that relations have evolved primarily in terms of military cooperation, and although “…it was very difficult to negotiate this agreement, we see Hungarians are taking it seriously and spending two percent of their GDP on defense.”

He added that Hungary also stood up several times in the UN and the EU for the US and Israel, opened a diplomatic mission in Jerusalem, and supported President Trump’s Middle East peace plan as well.

The Ambassador also shared with the news portal that there are also non-public issues he is dealing with and sometimes he “…gets calls from Washington to talk to the Hungarian government because we want something within the EU that would be good for both Hungary and the United States.”

It works both ways, and sometimes the Hungarian government “asks if I can call Washington, to help with a particular matter. None of this gets into the press. Private matters, they are settled. Without a connection, no one would ever pick up the phone.”

The ambassador also spoke about Hungarian-Russian relations and said the US thinks and says to their diplomatic partners that “…doing business with China, Russia and Syria is a bad decision. If they disagree with us, it’s their job. But we’re going to tell them our opinion – and maybe they will change their minds.”

He believes that since “Hungary gets 80-85% of its energy sources from Russia,” it has a huge impact on politics as well. However, he added that he thinks “this government really wants to break away from Russia, but it is a very complex matter. We hope it will work at some point.”