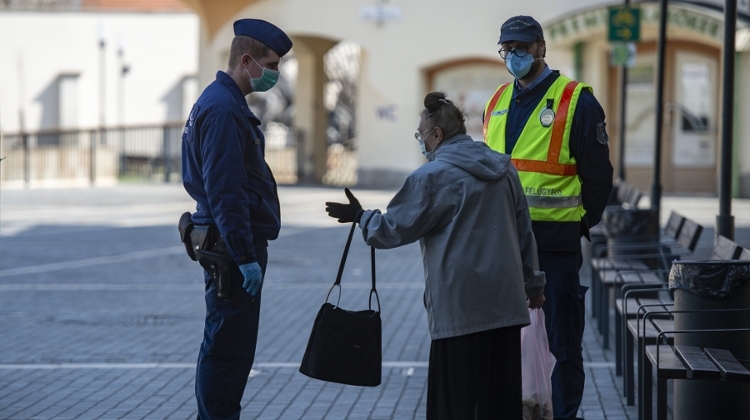 PM Orbán has imposed a partial curfew / social distancing restrictions in Hungary, currently set between March 28 and April 11. People are only allowed to leave their homes for 'substantial reasons', as per the list below.

Going out to exercise is allowed, but only alone or with other members of the same household, and while maintaining the 1.5 m distancing requirement from other people - see below for a list of what's now 'officially allowed'.

The restrictions are a somewhat stricter version of the curfew introduced in the German state of Bavaria, Orbán said, calling the measure “sensible and proportionate”.

Regarding Hungarian economic protection measures, he said: “Now the people come first, not the economy.”

At the same time, the government, he said, is already working on a plan to protect and restart the economy, adding that the action plan will be made public in the first or second week of April.

He paid tribute to health-care and law-enforcement staff, and praised people who work in grocery shops, pharmacies and factories.

“I thank all Hungarians because if there is a war – and this is a war situation – the hinterland matters just as much as the front line,” he said, adding that the country was in an orderly state.

Orbán said the aim was to slow the spread of the virus. To get rid of it altogether would require a vaccine, he added.

Restrictions on movement are being imposed in relation to the entire territory of the country for the period between 28 March and 11 April.

For two weeks, people in Hungary will only be allowed to leave their homes and places of residence for the purpose of going to work or meeting other essential needs.

The Prime Minister expects the restrictions on movement to further reduce the number of face-to-face interactions, and if this happens the speed of the spread of the virus will also slow down.

With reference to information gathered on the basis of questionnaires, the Prime Minister described the restrictions imposed so far as successful, indicating that Hungarians have reduced the quantity of social interactions to one tenth. However, unless further restrictions are imposed, this will not decrease any further. Therefore, the time has now come for the imposition of restrictions on movement, he explained.

The decree on restrictions on movement lists the essential reasons for which persons may leave their homes or places of residence. The government made every effort to define them in such a way that “life should remain liveable”, he said.

Among essential reasons he mentioned that parents who are unable to take care of their children’s supervision at home will continue to be able to take them to schools and nursery schools.

People can also go outdoors; however, they are asked not to congregate and to keep an appropriate distance from one another. Naturally, more permissive rules apply to relatives, he explained.

He added that he is determined to avoid a situation in Hungary where the need arises for the introduction of restrictions which make life almost unbearable.

The Prime Minister also highlighted that bigger crises – such as a major epidemic as in the present case – can only be managed intelligently.

Regarding the internal political situation, he said “at this time, it is not politics we need,” but unity because “the more of us combine our efforts, the more human lives we can save”. This is not about power now, it is about human lives, he stressed.

He recalled that because at the last sitting of Parliament they had not been given the necessary mandate with the required urgency, some measures had become uncertain from a legal point of view.

These include border-crossing bans which have now been extended on different legal grounds as “the country cannot be left defenceless even if the opposition refuses to consent to the prompt adoption of decisions,” he said.

The decisions on the closure of universities, too, have ceased to have effect. They asked rectors, however, to keep their institutions closed.

The Prime Minister observed that next week the votes of government-party Members of Parliament will be enough for the decisions necessary for prompt action as “speed is of the essence”.

During an epidemic, lives could depend on prompt reactions, he pointed out, adding that the government does not want to adopt measures that it has no right to; it simply wants to be able to make swift decisions.

He also said in the present epidemic the EU’s weaknesses are especially coming to the surface.

Regarding the EU and the criticisms levelled at the proposed legislation on the coronavirus containment effort, Mr Orbán said “for all I care, they can scrutinise [the proposal] as long as they like; I wish them all the very best, and good health”.

There are situations when one cannot be polite, and therefore he plainly told EU critics that this is no time for “being smart” about legal and theoretical issues, we must save lives, he said.

He further observed that Hungary had received help from China and the Turkic Council.

He also said some 80 per cent of people only carry the virus, and hardly even notice that they have been infected.

At the same time, 15 to 20 per cent of patients fall ill and display symptoms. Some of these many people – around two million projected to Hungary’s entire population – will also need hospital treatment, he explained, while the elderly and those with chronic underlying illnesses will require intensive care. If we are unable to slow down the infection, they will all need hospitalisation at the same time, and the Hungarian health care system would not be able to cope.

When Hungary reaches the peak of the epidemic, health care will be exposed to an approximately ten-fold workload, compared with normal peace time, in terms of supplies, beds, ventilators, physicians and nurses, he said, pointing out that protecting physicians is one of the most important tasks.

He also announced that from Monday morning uniformed “hospital commanders” would appear at the head of every hospital.

Naturally, they will not decide on medical issues – physicians will; “hospital commanders” will be responsible for enforcing disease control regulations, ensuring the availability of supplies and “maintaining” staff management, the Prime Minister said.

He stressed that if this system proves to work well in the next few weeks or months, hospitals will not be overwhelmed.

Leaving home is now only allowed for the following key reasons:

- Work,
- Taking kids to daycare (parents who cannot stay at home with their children can take then to schools and kindergartens where they will be supervised in small groups),
- Medical needs + for medication
- Sports activities and recreational walks,
- Weddings and funerals,
- Shopping for groceries, pet food, drugstore items, tobacco, and fuel,
- Official admin procedures that require your personal presence,
- Walking pets and caring for animals,
- Parental obligations,
- Religious activities,
- Haircuts and manicures,
- Cleaning and hygienic services,
- Car + bicycle repair services,
-  Veterinary services,
- Postal, shipping, banking, financial, + insurance services,
- Giving assistance to those who are unable to take for themselves.

The Police are charged with enforcing these restrictions, along with the military police and other law enforcement agencies.

While non-compliance with the rules constitutes a breach of law, Mr Orbán asked police officers to help people comply with, rather than enforce the rules.

Also, entry of non-Hungarians into the country is now banned, with only a few exceptions, for example:

Families traveling together, if at least one of the parties is a Hungarian citizen, the foreign family member - child, parent, grandparent, husband or wife - is permitted to enter Hungary.

Coronavirus: Peak Of Epidemic In Hungary Expected This June, July