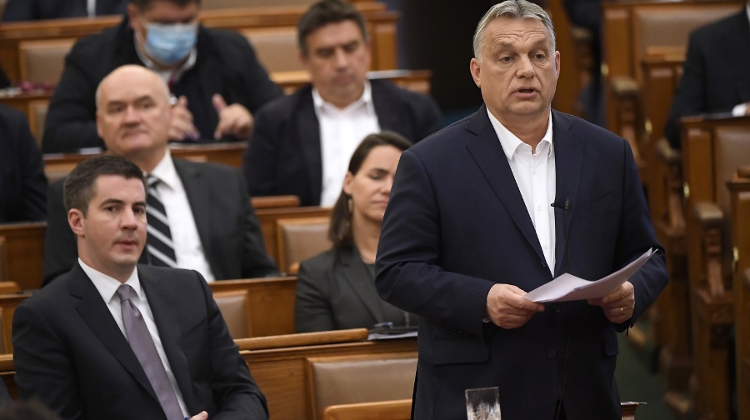 The Hungarian government will handle the crisis brought on by the new coronavirus epidemic even if the opposition does not vote to prolong the state of emergency, Prime Minister Viktor Orbán said in parliament on Monday, ahead of the debate of the government’s epidemic response bill which has been slammed by opposition lawmakers who say the bill hands the government excessive powers.

Speaking in parliament after his speech detailing the government’s response to the crisis so far, Orbán said: “The situation is difficult and worse is to come.”

Orbán called on ruling party lawmakers to “be brave … the 133 bravest people in the country”, and vote for the measures to help the country.

“Never mind what the opposition is afraid of,” he said. Pro-government lawmakers “should not flinch”.

Regarding the timeframe of a prolonged state of emergency rejected by the opposition, Orbán said the government did not need a fixed time limit.

Parliament, he said, would have the right to “call it quits” every day. If it passes the law, parliament will have the power to strip the government of its special powers any day, he said.

Of the 90 day limit proposed by multiple opposition parties, Orbán said the country “will be in worse shape in 90 days than it is now”. The protective measures put in place are aimed at slowing down the epidemic so that it does not overwhelm the health-care system, he said.

The slower the epidemic spreads, the longer it takes to run its course, Orban said. “It will be a lot longer than three months. ”The measures taken so far are sufficient, Orbán said.

Although new steps will be necessary, “there is no need to underestimate the fact that we have left 3,600 billion forints [EUR 10.2bn] in people’s pockets,” he said.

Regarding schools, Orbán said schools were not closed but were operating in the digital domain. Students, he added, would still have a chance to finish the academic year.

On the issue of ordering a curfew, Orbán said the government was keeping that possibility on the agenda, even though a total curfew, he added, would probably be impossible to impose.

Currently, Hungary is heeding the experiences of other countries, primarily Austria’s, he said.Addressing the economic proposals of opposition parties to offset the impact of the epidemic, Orbán insisted that they had largely proposed austerity measures.

Such steps would cost the country jobs, and the government, he said, was working to preserve them. They aim to provide jobs as opposed to welfare, he said.

Orbán said state-manufactured protective gear would not be sold commercially.

Orbán said calls for wage hikes were legitimate, but it “might be worthwhile contemplating” whether they should be put off in favour of saving jobs and creating new ones.