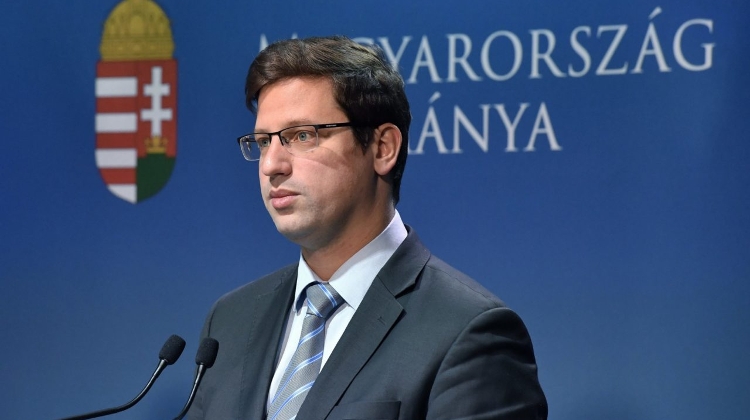 The government will hold regular consultations with the parliamentary parties with regard to the coronavirus situation, Gergely Gulyás, head of the Prime Minister’s Office, has said.

“In the current crisis it is necessary to build a partnership, even with adversaries,” he said. Ensuring that all conditions are in place for combatting the virus is in the interest of both the government and the opposition, he said, adding that parliament’s consent is required should the 15-day state of emergency, introduced earlier in the day, need to be extended.

Máté Kocsis, ruling Fidesz’s group leader, welcomed plans to hold weekly consultations, adding that “there is no room for political debates over coronavirus”. He called for the broadest possible cooperation within parliament.

Answering a question, Kocsis said that Fidesz does not support suspending parliament’s work because “while others are working, parliament will have to do so, too”.

László György Lukács, deputy group leader of the Jobbik party, said his party supported measures against the virus, but also noted his party’s objections such as against the government’s reluctance to close down schools.

LMP co-leader Erzsébet Schmuck said that the opposition “wishes to participate in constructive cooperation that rise above party interests” and fight successfully against the epidemic.

Sándor Burány, Párbeszéd’s deputy group leader, said that “we cannot afford to have no coordination within the government” and criticised the government for “not providing any assistance” to Hungarians wishing to return from Italy, adding that there were no protocols to screen those arriving in Hungary.

The Socialist Party is submitting a package of proposals to lawmakers in connection with the new coronavirus, with a view to protecting health-care employees, the elderly and children.

At a news conference on Thursday, Bertalan Tóth, the party’s leader, also announced that the Socialist Party’s congress scheduled for Saturday will be cancelled. Tóth proposed placing disinfectants on public transport, increasing the duration that jobless people can receive benefits, and hiking pensions by 6.5% with immediate effect.

Further, in the event of school closures, parents should benefit from more flexible regulations in the workplace, he said. Tóth also said multinationals should refrain from repatriating their billions of forints of profits from the country.

The opposition Democratic Coalition (DK) has asked the government to implement three proposals the party has prepared with a view to protecting people above the age of 60, a group most vulnerable to the new coronavirus, MEP Klára Dobrev said.

DK asked the government to allocate resources for local councils to organise services for people in the age group to get food, medical supplies and any necessary administration in order to enable them to stay at home for the next four to six weeks.

The party wants the government to oblige employers to reduce working hours for parents with small children in order to alleviate the need for grandparents to pick up their grandchildren from schools and kindergartens, she added. Any cut in wages resulting from this measure should be reimbursed from a dedicated state fund, she said.

Additionally, the party wants the government to extend the deadline for all public utility bills so as to prevent older people from having to stand in line at the post office for making the paper-based payments, she said.

In response to a question concerning the state of emergency introduced by the government, Dobrev said the government should have introduced protective measures weeks ago. She added that 8 billion forints (EUR 23.7m) had been allocated for combating the coronavirus as against 150 billion forints for government communication, whereas “everybody would feel safer if this was the other way round”.

Meanwhile, The PSZ and PDSZ teacher unions are calling on the government to order a suspension of classes at all schools in Hungary due to the outbreak of the new coronavirus, PSZ leader Zsuzsa Szabó said at a press conference. She said PSZ disagreed with the government’s decision not to apply the state of emergency declared on Wednesday to schools, citing worldwide public school closures.

Szabó argued that although few children and young people were getting infected with the virus, they presented a “high risk” to others as potential virus carriers. She added that closing schools would also protect teachers whose average age range is 48-50.

She said both Hungary’s education law and the human resources ministry resolution regulating the school calendar allowed for extraordinary school breaks. Even if schools could not make up for all of the time lost during such a break, the law would allow for them to cover any leftover material in the 2020-2021 school year, she argued.

PDSZ also argued in favour of closing schools, saying that schools could still get through the curriculum by moving to distance learning.