Opinion: Translation Of Draft Law “On Protecting Against Coronavirus” 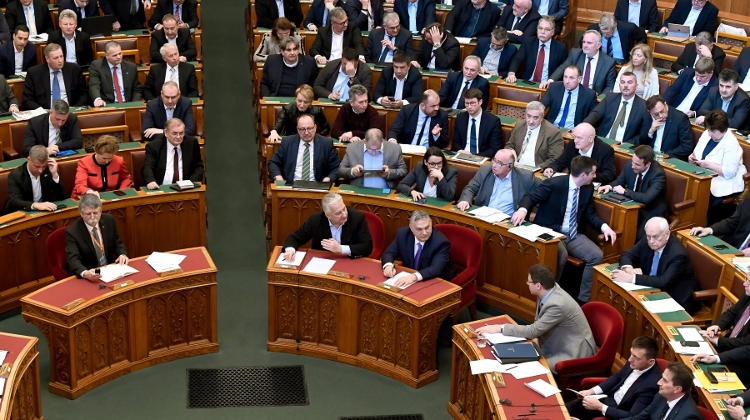 Hungarian Spectrum published this translation of the draft proposal of the law submitted by Zsolt Semjén, deputy prime minister, to László Kövér, president of the Hungarian Parliament last Friday.

Hungarian Spectrum then made follow up posts looking into the proposed new bill, they're available in full on that website, here's an excerpt:

Péter Bárándy, minister of justice between 2002 and 2004, is a man of measured words. So, when he says that this new law has no legal purpose but is designed as a means to quash political life in Hungary and establish a dictatorship, we must take it very seriously.

By now, Bárándy has no trust in the Orbán regime’s justice system. But, as he put it, the government should at least have been a bit more careful about the bill’s title, “Enabling Act,” the same as Hitler’s infamous Ermächtigungsgesetz of 1933.

Governing by decree means the suspension of basic human rights, freedom of expression, right of access to data of public interest, right to protection of private data, right of conscience, freedom of religion, and even legal standing.

There is no time limit to these abrogations of human rights. And since parliamentary discussions are suspended once governance by decree commences, political life will come to an end.

Tamás Lattmann, an expert on international and European law, agrees. He especially questions the legal grounding of the proposal because “it looks as if the government is going to use a state of emergency declared in violation of its own constitutional law to effect a genuine constitutional coup by perpetuating extraordinary legal rights in its own hands.”

In brief, the “enabling act” serves no legal purpose. Its only objective is political, the introduction of a dictatorship without time limit.

On Protecting Against the Coronavirus

In order to ensure that the Government may take all necessary extraordinary measures required for preventing and mitigating the consequences of the COVID-19 human epidemic of 2020 causing mass infections, and keeping in mind especially that because of the human epidemic the sessions of Parliament may be suspended, in awareness of the fact that responsible decisions must be made in times of crisis, and although the measures introduced this far – and to be taken in the future – may seem to involve unusual and unfamiliar restrictions, complying with them, cooperating and being disciplined may prove to be the greatest asset of Hungarians, in recognition of taking joint action, coming together as a nation, and feeling thankful for the sacrifices made by health care workers, law enforcement workers and all others concerned, the Parliament passes the following law in respect of granting authorization to extend the effect of the Government’s decrees that are issued in an emergency situation and determining the framework thereof:

This law determines the special rules pertaining to the emergency (hereinafter: emergency) decreed in Government Decree 40/2020. (III. 11.) on proclaiming emergency (hereinafter: Decree) pursuant to section 53 (1) of the Fundamental Law in order to prevent and mitigate the consequences of the human epidemic jeopardizing human life and property and causing mass infections and to protect the health and life of Hungarian citizens.

(1) In such emergency the Government – in addition to the extraordinary measures and regulations set forth in Act CXXVIII of 2011 on emergency management and the amendment of certain relevant laws – in order to guarantee for Hungarian citizens the safety of life and health, personal safety, the safety of assets and legal certainty as well as the stability of the national economy, may suspend the enforcement of certain laws, depart from statutory regulations and implement additional extraordinary measures by decree.

(2) The Government may exercise the competence granted in paragraph (1) – to the extent necessary and in proportion to the desired objective – for the purpose of preventing, managing, and eliminating the human epidemic set forth in the Decree as well as for preventing and mitigating its harmful effects.

(1) Pursuant to section 53 (3) of the Fundamental Law, the Parliament authorizes the Government to extend the effect of

(2) The Parliament may withdraw the authorization set forth in paragraph (1) before the end of the emergency.

The Government shall provide information on a regular basis, during the Parliament’s session – or in the absence thereof, for the Speaker of the Parliament and the heads of parliamentary representatives’ groups – about the measures that are taken to avert the emergency, as long as the effect of the measures is maintained.

(2) The full session of the Constitutional Court and of the council can also be held via electronic channels, based on the decision of the President, until the end of the emergency.

(3) In an emergency the President may authorize a departure from the rules of procedure of the Constitutional Court.

(1) If the dissolution of the body of representatives of a local authority or a minority authority is decreed, this decision will take effect on the day following the end of the emergency.

(3) Until the day following the end of the emergency, no national or local referendum can be initiated, and all already scheduled national and local referendums will be cancelled. All deadlines set forth in sections II-IV of Act CCXXXVIII of 2013 on initiating referendums, the European citizen’s initiative and the referendum procedure shall be suspended.

This law will take effect on the day after it is promulgated.

The decision on the expiry of this law shall be made by the Parliament upon the end of the emergency.

(1) Persons obstructing the implementation of

are considered a criminal act, punishable by up to three years of prison.

2) If the criminal act is perpetrated by a group, it is punishable by one to five years of prison.

(3) If the criminal act causes death, it is punishable by two to eight years of prison.

(4) Persons initiating an obstruction of epidemiological measures commit a crime that is punishable by up to one year of prison.”

(2) Section 337 of the Criminal Code shall be replaced by the following:

(2) Persons who under extraordinary rule of law claim or spread a falsehood or claim or spread a distorted truth before the grand public that is suitable for obstructing or preventing successful protection commit a crime that is punishable by one to five years of prison.”

Our Fundamental Law, which is the basis of our legal system, describes in a very detailed manner and complete with guarantees, which is remarkable even by international standards, what to do in extraordinary situations, in addition to outlining the role of each constitutional body. Accordingly, extending the effect of an emergency past 15 days is the responsibility of the Parliament.

Based on the above, the purpose of this proposal, in agreement with having an emergency decreed by the Government in Government Decree 40/2020. (III. 11.) on proclaiming emergency (hereinafter: Decree) pursuant to section 53 (1) of the Fundamental Law in order to prevent and mitigate the consequences of the human epidemic jeopardizing human life and property and causing mass infections and to protect the health and life of Hungarian citizens, is to confirm all measures that have been taken since and to extend their effect pursuant to section 53 (3) of the Fundamental Law.

An additional purpose of the proposal is to let the Government of Hungary enact and maintain the effect of its decrees containing extraordinary provisions if the Parliament does not meet for a reason that is related to the human epidemic caused by COVID-19 in 2020 and resulting in mass infections.

This justification will be published in the Directory of Justifications that is published as an annex to the Hungarian Official Gazette pursuant to section 18 (3) of Act CXXX of 2010 on law-making, as well as section 20 of the Decree 5/2019. (III. 13.) of the Ministry of Interior on the publication of the Hungarian Official Gazette as well as a reference to it with respect to the promulgation of statutory regulations and the publication of normative resolutions and orders.

The proposal makes it clear that granting authorization and creating special regulations pertain specifically to an emergency decreed by the Government in order to prevent and mitigate the consequences of the human epidemic jeopardizing human life and property and causing mass infections and to protect the health and life of Hungarian citizens, as specified in the Decree.

In keeping with section 53 (1) and (2) and section 54 (1) of the Fundamental Law, section 2 (1) of the proposal permits the Government to take any measure and enact any normative regulation – in addition to the extraordinary measures and regulations set forth in Act CXXVIII of 2011 on emergency management and the amendment of certain relevant laws – that is necessary to guarantee for Hungarian citizens the safety of life and health, personal safety, the safety of assets and legal certainty as well as the stability of the national economy in relation to the human epidemic caused by COVID-19 in 2020 and resulting in mass infections.