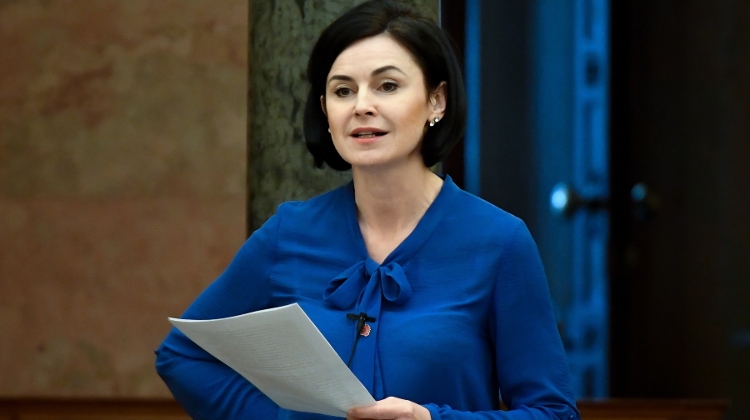 Hungary’s opposition parties called for implementing a mix of economic stimulus measures different from the ones announced by the head of the Prime Minister’s Office.

Socialist lawmaker Ágnes Kunhalmi (pictured on top) called for a proportionate and less selective “left-wing” package of measures that are more effective in terms of solidarity and preserving competitiveness.

The Socialists welcome the 500,000 forint bonus pledged to be paid in the summer to health-care workers whom Kunhalmi said should receive it right away instead. The party proposes further wage increases for health-care and social sector workers, she told an online press conference on Facebook.

It also proposes further measures that include setting a minimum payment of 100,000 forints as an unemployment benefit and extending its eligibility period from 3 months to 9, increasing pensions by at least 6.5% instead of 2.8% and allowing early retirement for employees over the age of 60.

The Socialists further propose a government takeover of 75-80% of wage payments for business sector employees and introducing a moratorium on layoffs, as well as centrally setting a fixed price for basic foodstuffs, protective gears and disinfectants, she said.

The party’s package of proposals include protecting all jobs where possible with centrally provided wage benefits to ailing companies. He said DK further proposes guaranteeing employees the payment of 80% of their monthly wages while extending eligibility for a jobseekers’ allowance for 6 months.

DK is also calling for a 100% wage increase for health-care and social sector workers and an additional 500,000 forint bonus payment for law enforcement and army staff, Gyurcsány said.

DK’s proposals further include imposing a moratorium on terminating basic public utility services in households over unpaid utility bills and a 400 billion forint bailout programme for state and local council-run companies, he said.

Green LMP also welcomed the one-off payment to health workers, but called for a 50% general wage increase in the sector. The party called on the government to terminate “luxury investments” such as the large-scale Liget museum quarter project in Budapest’s City Park or the billions of forints’ worth of state support going to the Hungaroring company and to spend the money on combatting the coronavirus outbreak.

LMP is also calling for more support and supplies for local governments that are “on the frontline” of the efforts to contain the virus, lawmaker Antal Csárdi told an online press conference.

The Párbeszéd party called for a 100% immediate wage increase for coronavirus health-care workers. The party rejects any further financing cuts for local governments which are at the forefront of coronavirus response efforts and are at the same time losing out on revenues they would otherwise generate in local business taxes and parking fees, spokesman Richárd Barabás told an online press conference.

While the government has left in place a thousand billion forints for the upgrade of the Budapest-Belgrade railway line, it has allocated a mere 70 billion for coronavirus frontline workers, who risk their lives every day to save others, he said.

Ander also criticised the only 55 billion forints planned to be collected from banks that had “destroyed the livelihoods of many forex loan holders via tricks”.