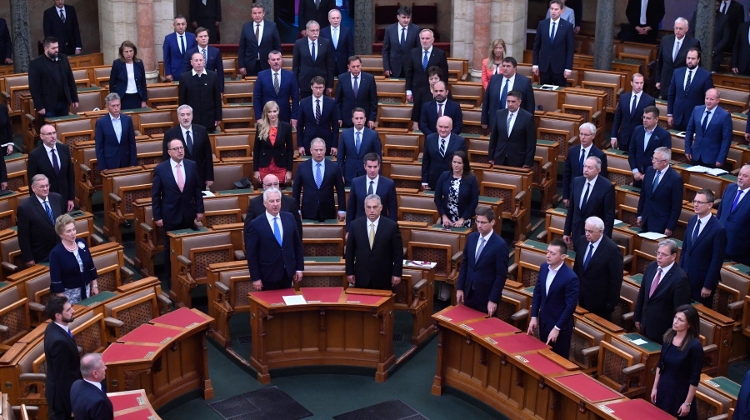 President János Áder gave a speech in Parliament on Saturday, at the celebratory session marking the 30th anniversary of Hungary’s first free parliament after the fall of the communist regime.

“What we created over the past thirty years has withstood the test of time … Hungary is an independent, democratic state under the rule of law, a free country,” Áder said. In his speech, Áder proposed to “use as a resource” the experience of the past thirty years to resolve the problems posed by the novel coronavirus epidemic “so we can soon enjoy freedom again”.

The first session of the first freely elected parliament on May 2, 1990, “marked the end of an era”, Áder said. The first Hungarian parliament after the communist era had the task to build a state on the rule of law, prepare the ground for freedom, strengthen its constitutional basis and set up the institutions of democracy and the nation’s sovereignty, Áder said.

He thanked all those working on creating the new political and constitutional system. He also thanked the first president, Árpád Göncz, the first prime minister, József Antall, and the Speaker of the first Parliament, György Szabad.

Hungarians at the time of the regime change fought for Hungary to “become the homeland we all call ours … an independent country serving no one … and a community where the love of country does not only mean that people are faithful to the country but that the country also keeps faith with them.”

After Áder’s speech, lawmakers adopted a political declaration marking the 30th anniversary of the restoration of popular representation in Hungary. The proposal was submitted to parliament by Prime Minister Viktor Orbán, House Speaker László Kövér, Fidesz lawmakers Máté Kocsis, Lajos Kósa, Mihály Varga, Zsolt Németh and Richard Hörcsik, and Christian Democrat MP Péter Harrach, and was passed with 126 votes in favour and one against.

The declaration said the Hungarian parliament honoured the memory of the first freely elected assembly after the country had lost its independence on March 19, 1944 (when Germany invaded the country in WWII).

In later years, the new basic law in 2012 protected the country from “external dependency and renewed impoverishment”, the document said. It said that the MPs of Hungary’s incumbent parliament commit themselves to fundamental values driving the regime change such as freedom, constitutionality and national self-determination.