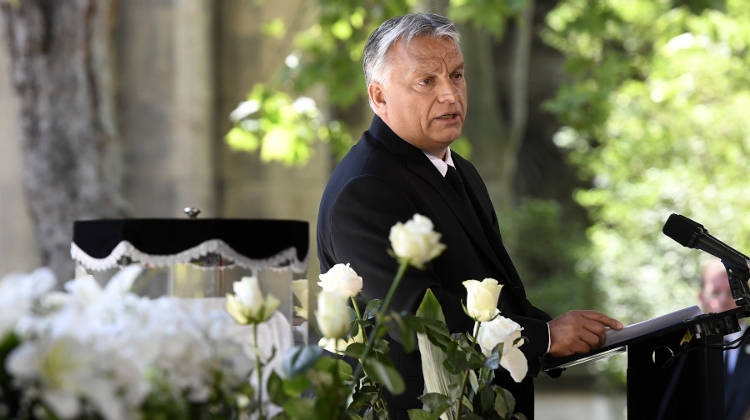 Hungarian culture is a creative and cohesive force without which not only can we not survive, but neither can we live; and it is perhaps not even worth living without, Prime Minister Viktor Orbán said at the funeral of Honorary President of the Hungarian Academy of Arts György Fekete at the Fiumei út cemetery in Budapest on Tuesday.

The Prime Minister highlighted that if we take root in culture, if we feed from it, if we draw inspiration from it, if we let it unfold, then “not only will we survive, we will regain and even multiply that which those who went before us left to us”.

Mr Orbán said one can run towards the destination that is cut out for one in many ways; there are some who first look back, in order to then look ahead in a calm and composed manner, in possession of robust knowledge, and György Fekete was one of those.

He recalled that as a young man he had had enough of decades without progress, “we wanted to move on, to lead the way”.

However, when in the great rush the horizon became uncertain, he looked back to see where they were coming from, and which way they should be heading.

It was then that his eyes met György Fekete’s, and while this was no alliance or friendship at first sight, time can be a great help if it is seen as a once-in-a-lifetime opportunity to take action, he said.

He highlighted that the two of them had “met on a path leading towards the realisation of a great work”.

They knew that Hungarian culture was unable to reach its exceptional potential without overarching institutions that functioned reliably and offered members of the Hungarian arts community a safe intellectual shelter; this is why the Hungarian Academy of Arts had to be formed as a public body, he pointed out.

He added that as they had had a two-thirds majority, they had incorporated it into the Fundamental Law.

The Prime Minister said several members of György Fekete’s generation allied to wipe away the past once and for all in a murderous rage, but he was a member of his generation who tirelessly gathered and preserved the values of Hungarian national culture of a thousand years in the belief that this would create the ability of survival, and this position is worthy of the Hungarian people “when we align ourselves to the world, meeting the cultures of other nations”.

He observed that the task of establishing new institutions had finally fallen on those who had lived a larger part of their lives in socialism, but staying outside socialism.

Mr Orbán took the view that “the Hungarian people deserved the Lord’s patronage,” this is why so it happens that Hungarians are always blessed with great minds, geniuses, talented people amidst their ranks who shape and form the spaces that surround them, thereby enriching the world.

But the works of the great, their spiritual and intellectual energies, too, need structures, frameworks that will survive them, and which will then turn into custom and practice, he said.

He added that this is why our ancestors established schools, museums, academies, institutions, periodicals and societies which were all destined to represent the progression and continuity of authors, artists and works.

He said it was in this joint building work that he and György Fekete met, and became “each other’s colleagues and brothers in arms”.

Soldiers of public life have the tool of governance at their disposal with which they create opportunities and frameworks for the embodiment of spiritual energies, and this was the foundation of their  alliance, he pointed out.

The Prime Minister recalled that for Mr Fekete protecting the positions of national culture and the nation state was synonymous; he was not misled by the differentness of the tools of artists and politicians because he knew that – as regards their essence – these are professions bonded by kinship, at least in Hungary.

Mr Orbán stressed that culture was a battlefield, and “today when we cast our eyes towards the West, we are shocked to see that this is so”.

But here in Hungary, and especially for György Fekete this battle meant something else; a struggle in which we always fight for ourselves, never against others, and “we Hungarians want an alliance of national commitment and autonomous artistic aspirations,” he said.

He took the view that “it is our duty to elevate the thought, the will and the work to a worthy place,” and to carry them on in a worthy form, in worthy order and in worthy institutions so that the cultural performance of the Hungarian people can be built into a structure that aims ever higher.

György Fekete – interior designer, applied artist, artist of the nation and former President of the Hungarian Academy of Arts – died on 15 April aged 88.