Cseri Chosen As Hungarian Footballer Of The Year 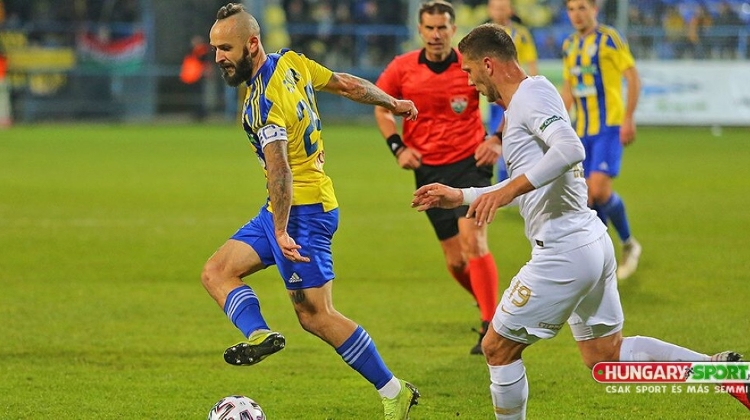 In a separate award voted for by fans, the best goal this season was adjudged to have been scored by Benjamin Babati of Zalaegerszeg in the very last round of fixtures.

As is traditional, the Hungarian Football Federation again held its annual awards ceremony to recognise the outstanding performers of a football season which finally ended last week, this time the award winners receiving their prizes in an unusual way, a legacy of saftey measures employed in the ake of the coronavirus pandemic which delay the end of the season.

By the end of the last Saturday in June, the 2019-2020 season had produced countless memorable moments, Ferencváros retaining their championship title for the first time in 24 years ahead of MOL Fehérvár FC and Puskás Akadémia, while Honvéd won the Hungarian Cup 11 years after their most recent triumph.

Therefore, Ferencváros will represent Hungary in the UEFA Champions League while the three other afore-mentioned teams will compete in the Europa League.

This year, MLSZ announced the winners of seven categories (Player of the Year, New Discovery of the Year, Top Goalscorer, Best Coach in the OTP Bank Liga, Best Referee, Best Goal and the Fair Play Award).

The winners of each category was decided on the basis of votes by the clubs, specifically the team captain, head coach and the oldest and youngest squad member voting for the three players they considered the best in each category.

Exceptions to this system were the referee of the year, the top goalscorer and the Fair Play award, while fans were able to vote for the goal of the year on the M4 Sport website.

No prizes were awarded in the women’s categories this year because there were no final results in the Simple Női Liga due to the coronavirus pandemic.

The awards were presented in an unusual way - in the studio of M4 Sport studio by Tibor Nyilasi, a member of the MLSZ Executive Committee and head of the Technical Committee.

Podium places in each category:

Reaction from the award winners:

“This title is a huge thing in my career. I would like to thank my teammates, without whom this would not have been possible, the coaches and all the staff at the club.

I very much hope that I will be here again with such an award in my hands. I've had a more prolific season than this one, but that time I only finished in 3rd place goal scorer list. Now this amount (13) was enough and naturally I'm very happy with this award too."

"I want to thank everyone who gave my goal their vote. I didn't think during the game that the strike would lead to this outcome. One of my goals was nominated last year but then I only finished fourth."

“I would like to thank my family and my teammates because without them I would not have been able to receive this recognition, as well as the club that trusted me and everyone who voted for me.

I felt this year that I had to fully commit to being a pivotal member of the team and I’m glad that many times it turned out this way. This season, the goal I scored against Kaposvár when I managed to pull off several tricks, is my dearest memory."

“This success is an extraordinary pleasure for us, because at Ferencváros we place special emphasis on fair play. I think it’s a huge thing that we managed to become champions while also winning the Fair Play award.

Fair Play is also very important to us because, as the most popular Hungarian club, we have two million followers in Hungary, which is not only a great opportunity but also a huge responsibility."

"I would like to thank my club, my coaches and my teammates for helping me win this award. Special thanks go to ZTE's co-owner and sports director for giving me the opportunity, confidence and patience that every young player desires.

It was my first season at the top level, so I took time to pick up the rhythm at first because I wasn’t used to the speed of the game at this level, but once that happened, my performances improved a lot.”

"This is my second league season and our second league title. We're glad we were able to win the gold medal again, and of course (I'm glad for) the recognition of my work.

As far as my own role is concerned, perhaps the most important thing was that I communicated well with the players and with squad members so there was mutual trust. Of course, the success was mainly down to the footballers; they put in a huge amount of work to win this championship title."