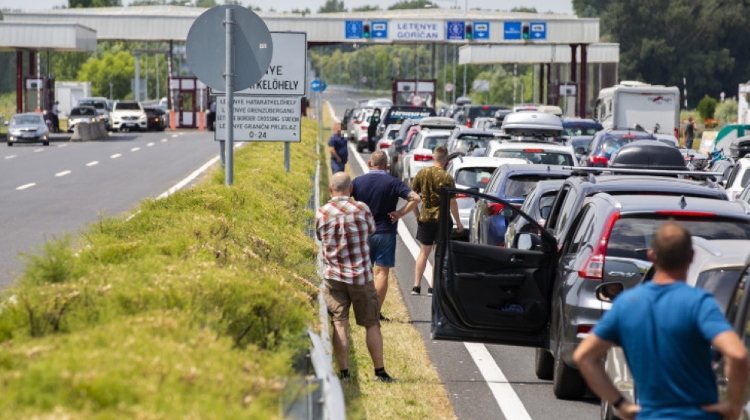 From the first of September, due to the coronavirus pandemic, it will be necessary to introduce more stringent disease control regulations than in effect at present; the Operational Group will make recommendations regarding these at next week’s cabinet meeting, Gergely Gulyás, the Minister heading the Prime Minister’s Office announced at a Governmentinfo press conference held on Wednesday.

He said in most countries around Europe the situation is deteriorating, the epidemic situation is only stagnating in a few countries, and these trends have an impact on the Hungarian numbers at a delay of a few weeks, meaning that the easing of travel restrictions is out of the question.

No one should organise holidays abroad after 1 September, in particular not to the Southern countries, the Minister said.

He stressed that resuming education is essential for maintaining the country’s operations, and this requires us to prevent a rise in the number of infections.

He added that the government had moved Norway from the yellow category to the green zone as its most recent indicators were among the best in Europe.

Government Spokesperson Alexandra Szentkirályi indicated that the disease control deployment unit had been set up and started its operation; the government heard the Interior Minister’s report on this.

It is the duty of the unit to prevent the further spread of the coronavirus epidemic by localising infection epicentres.

The unit is headed by the deputy of the Chief Medical Officer. It is further the duty of the unit to coordinate the work of cooperating organisations in order for them to use the available resources with maximum efficiency. In justified cases, the unit has the authority to impose restrictive measures locally, she explained.

In answer to questions, Mr Gulyás said the latest European infection data shows that the government will be required to introduce more stringent disease control measures in a week’s time, and therefore no one can responsibly organise trips abroad extending beyond 1 September.

He emphasised they appreciate that the cancellation of pre-booked trips abroad could cause difficulties; at the same time, the cabinet must pay attention to the health and well-being of the whole of society as well as to the availability of appropriate conditions for the fight against the epidemic when they adopt the rules relating to travel.

Hungarian nationals will always be able to return to Hungary, he added.

Answering questions concerning the disease control protocol of the Ministry of Human Capacities, he said the document contains very important and good recommendations; at the same time, it also contains some unrealistic advice which should be reconsidered in order to maintain the integrity of the document as a whole.

He stressed that during the first wave of the coronavirus epidemic there was a need for the implementation of stringent restrictions in order to gain time for the health care system; today, however, health care is fully prepared, and with regard to this, they would like to start and finish the next school year in the normal teaching system.

Mr Gulyás said if a coronavirus vaccine with medically proven effectiveness appears on the market, Hungary will immediately buy a fixed quantity of it, and he cannot imagine that there would be any patient who would be unable to afford it due to their financial circumstances.

He added that the cabinet would not like to change the practice of testing which has proved to be effective so far.

Mr Gulyás said the fact that compared with 2010 the government is spending HUF 770 billion more on health care annually is an item of data which best describes the situation of health care.

As a result, the average life expectancy for men has risen by more than two years, while that of women by more than one year; at the same time, the number of years spent in health has increased by 3.5 years for men and 2.5 years for women.

The Minister said, thanks to the electronic health care services space, the Operational Group is able to keep track of the development of available hospital beds at a daily level. Based on this, on Tuesday 7,812 hospital beds were available for patients suspected of suffering from coronavirus infection, he said.

He observed that at this time, sports associations are able to make responsible decisions about which sporting events can be held as part of local championships.

The government sincerely hopes that every month’s employment level will reach the corresponding figures of the year before, Gergely Gulyás, the Minister heading the Prime Minister’s Office stated at Wednesday’s Governmentinfo press conference.

Highlighting the importance of restarting the economy and creating jobs, he said in the first six months of this year, there had been a decline in all Member States of the European Union; however, the Hungarian decline is below the EU average, and according to expectations, this trend will gain in strength.

He added that in July 4,460,000 persons were in employment in Hungary; this number is 2,600 higher than in January, but is below last year’s corresponding data by a few tens of thousands. At the same time, since 15 June the number of registered job-seekers has fallen continuously.

The Minister heading the Prime Minister’s Office pointed out that the government had already made available HUF 1,756 billion for boosting the economy, and also thanks to this, Hungary “is doing positively well” as regards employment data.

Mr Gulyás said the government supports the organisation of the exhibition ‘Dreamers of Dreams’ at the Millenáris Park, and will make the necessary funds available. According to plans, in the future the Millenáris facility will operate as a public foundation, he added.

He observed that the government had also decided to grant HUF 2.5 billion to the Hungarian Tennis Federation for starting the necessary process of consolidation.

In answer to a question, the Minister said they are aware of the intention to build a fence between Serbia and North Macedonia in order to curb migration, and from this they conclude that today many are adopting the Hungarian solution which was earlier widely described as unacceptable and inhumane.

He highlighted that the European Union will only be able to protect its borders if it stops letting those into its territory who are not eligible for refugee status.

Answering questions relating to Minister of Foreign Affairs and Trade Péter Szijjártó’s summer holiday, the head of the Prime Minister’s Office said the government does not investigate the holidays of any of its members.

At the same time, due to the situation in Belarus, the Minister of Foreign Affairs and Trade was compelled to work continuously even during his family holiday.

Mr Gulyás underlined he is certain that Mr Szijjártó had observed all the regulations also during his holiday, while he himself should answer any questions – if he wishes to – regarding whose invitation he accepted and where he spent his summer holiday.

The Minister said the European Union adopted unanimously the decision not to recognise the results of the elections held in Belarus.

In answer to a question regarding this, he added that Russia is a key factor in the region, and therefore the European Union will have to participate in the negotiations as a partner “because if sheer force is to decide, then the European Union has no army”.

“This is what happens when one uses the services of foreign companies,” he said, adding that from 1 September traffic could resume on the section concerned with some restrictions, but in three lanes.

Regarding George Soros’s latest statement about Prime Minister Viktor Orbán, he said the Hungarian Prime Minister fought for democracy and freedom during the time of a dictatorship, and so any accusation levelled at him in connection with autocratic regimes is absurd. (In an interview, George Soros said Mr Orbán followed Lukashenko’s example on the issue of the CEU.)

According to Mr Gulyás, there is a “cat fight” on the Left, while they have already agreed on nominating joint candidates in the next elections. As Ferenc Gyurcsány is factually the leader of the strongest party, if the Left were to win the elections, it is impossible for him not to have a strong say in the affairs of the government, he said stating his view.

The Minister said in the present situation they are unable to promise pensioners vouchers for household utility services; however, the pension supplement is tied to conditions laid down in a law.