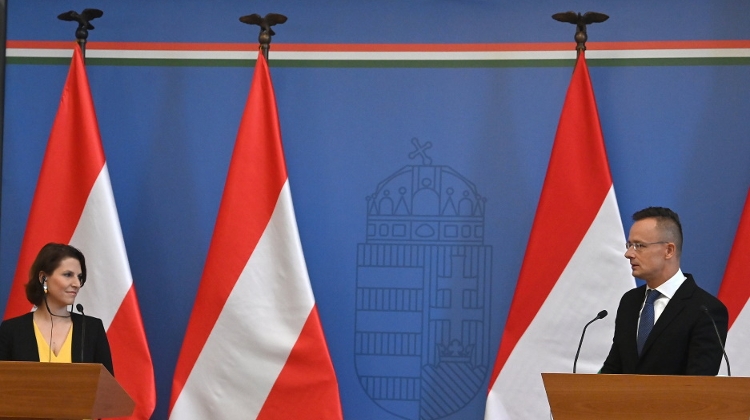 Austria is one of Hungary’s most important and closest allies, Foreign Minister Péter Szijjártó said after talks with Karoline Edtstadler, Austria’s minister for EU and constitutional affairs, in Budapest.

Hungary holds the current Austrian government in high esteem and though the two countries have their disagreements, bilateral cooperation “will not be held hostage by those issues”, Szijjártó told a press conference he held jointly with Edtstadler.

The two countries agree on the most important issues, such as European Union enlargement in the Western Balkans and the rejection of mandatory migrant quotas, Szijjártó said.

As regards the European Commission’s new migration pact, he said Hungary had a “strongly negative view” of the document, arguing that it appeared that Brussels had “not learned anything from the mistakes it made over the past years and hasn’t given up its pro-immigration policies”.

“This package is a hopeless attempt to avoid referring to something that is a quota as a quota,” he added.

Szijjártó said the proposal was actually about the distribution of migrants across the EU, which he said Hungary opposed.

If the EU were to face new migration waves right now, those would also pose serious health risks, he said, adding that Hungary was sticking to the position that migration should be stopped instead of managed.

“But this package is still about managing it.” Hungary continues to protect its borders and will not allow illegal migrants to enter its territory, he said.

On another subject, Szijjártó said Hungary will join other central European member states in challenging the EU’s mobility package in the Court of Justice of the European Union on the grounds that its bureaucratic measures put central European road haulage companies at a disadvantage.

Around 2,500 companies do business in Hungary and employ some 70,000 people, the minister added.

Asked about the government’s restrictive measures concerning the novel coronavirus epidemic, Szijjártó said that if conditions allowed, the government was prepared to ease restrictions but also to tighten them, if necessary.

Edtstadler called Hungary a reliable partner and a friend, saying the two countries must strive to preserve the current state of their cooperation.

On the topic of the EC’s migration pact, she said the mandatory distribution of migrants had failed as a policy. Solidarity is important, she said, adding, however that there were other ways of expressing it, besides taking in illegal immigrants.

Edtstadler also underscored the importance of the rule of law, saying it was a fundamental value for Austria on which it was unwilling to compromise.