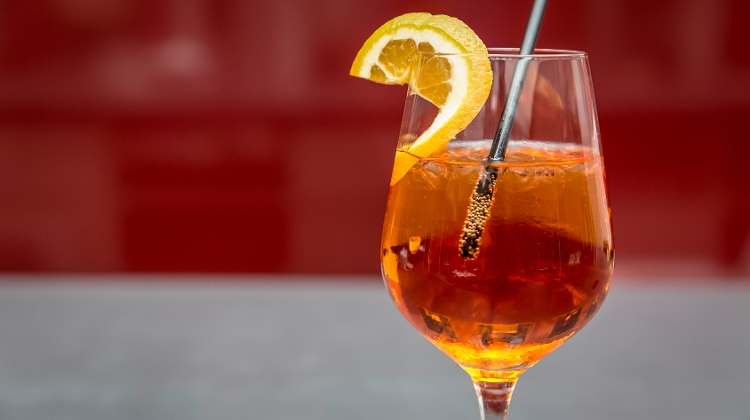 Varga Winery teamed up with Mojito Bartending School, organizing a competition to find the best Hungarian cocktail recipe which utilizes the must of Irsai Olivér grapes, a Hungaricum grape variety.

While the beer and wine culture in Hungary has been developing spectacularly in recent times, the organizers thought that there is still no typical Hungarian cocktail on the market, which utilizes ingredients often identified with the country.

With a call for recipes, they were looking to put a new, Hungarian cocktail on the menus of restaurants and bars.

The final round of the competition was held last weekend, with a grand total of HUF 700,000 handed out among the participating bartenders.

Out of the five finalists, the best drink was mixed by Norbert Tengely. The cocktail contains, apart from Irsai Olivér must, vodka, orange juice, and plum bitters.

In addition, the competitors were also asked to create their own take on Varga Wineryʼs Irsai Pezsgő Spricc cocktail, which contains a kind of sparkling wine made of the Irsai Olivér grape variety.

"However, in Hungary, bartenders rarely use pálinka as an ingredient when making cocktails, primarily due to its high price," says Norbert Schök, the head of the Hungarian Bartender Association, and partner of the competition.

While sparkling wine and champagne are two common ingredients in cocktail making, Schök says that the cooperation with winemakers and using must as an ingredient is unprecedented.

"Unlike pálinka, which is usually consumed on its own, must might make it easier to attract people to cocktails, as wines and spritzers are consumed in a wider circle," Schök adds.

Varga Wineryʼs Irsai Olivér must contains no preservatives, yet it remains drinkable for about a month after opening the bottle, which is important in the case of cocktails, as only a relatively small amount is used for an individual drink.

Máté Varga, owner-CEO of Varga Winery says, "In addition to sparkling wine spritzers made of Vargaʼs premium sparkling wines,  we wanted to make an alcohol-free version too, and during experimentation, we realized that must is an excellent cocktail-ingredient."

"Using Irsai Olivér as a must base is obviously the most interesting in Hungary, but as many foreigners frequent restaurants and bars in Budapest, it might be a rare experience for them as well.

However, if it gets picked up by the Hungarian bartending scene, and cocktails made of it get nominated at international competitions, and somebody wins the world championship with such a drink, it can also be really good publicity for the country," he adds.