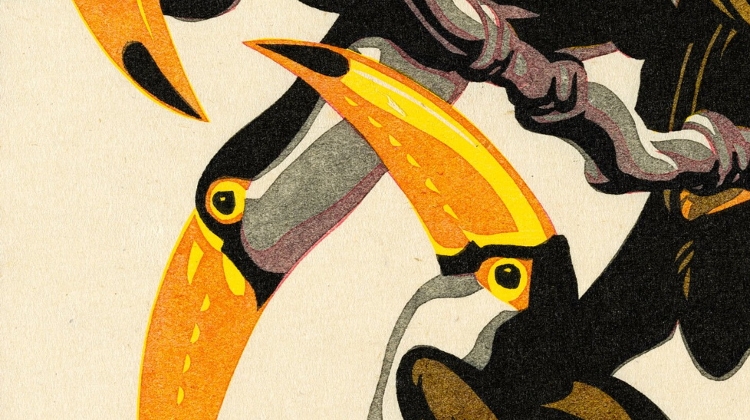 Seen until 17 May. The Museum of Fine Arts celebrates the 150th anniversary of diplomatic relations between Japan and Hungary with two exhibitions.

A chamber exhibition can be seen in the Museum of Fine Arts in Budapest focusing on the influence of Japanese woodcuts on the West, and primarily, on artists in the Austro-Hungarian Monarchy.

The chamber exhibition organised from the collections of the Museum of Fine Arts, the Hungarian National Gallery, the Ferenc Hopp Museum of Asiatic Arts and the Hungarian University of Fine Arts will display some seventy artworks, comprising Japanese woodcuts from the eighteenth and nineteenth centuries that served as inspiration for European artists, and prints from the Austro-Hungarian Monarchy conceived in the spirit of Japonisme.

The Japanese works will be on display together with the finest woodcuts found in Hungarian collections that were influenced by Japonisme.

A curiosity of the exhibition is that the overwhelming majority of the displayed Japanese, European and Hungarian artworks entered the collection of the Museum of Fine Arts in the early decades of the twentieth century.

For centuries Japan almost completely isolated itself from the world commercially and diplomatically and only opened its ports in the middle of the nineteenth century.

During the bourgeoning commercial activity of the time, Japanese artworks were introduced to the West exerting a significant influence on artists. The visuality of these works was completely new and inspiring for Western eyes and its ever growing popularity gave rise to Japonisme, which was manifested in applied and fine art, theatre, music, literature and fashion.

Japonisme emerged in the Austro-Hungarian Monarchy following the diplomatic agreement signed between the two countries in 1869.

The most frequent themes of Japanese woodcuts – depictions of nature (landscapes, flora and fauna), portraits (geishas, actors, courtesans) –, as well as on items of applied art objects clearly show the characteristics of compositions, techniques and motives that inspired European artists the most.

These include the handling of colour, the use of two-dimensionality, the close-ups, the decorative contours and elements that were different from the European tradition.

The meeting between East and West, which impacted a great many people with the force of a revelation, was facilitated by the world fairs organised during the nineteenth century across Europe: in London (1862), Paris (1867) and in Vienna (1873).

As a result of the huge interest in Japanese art, including woodcuts, that arose in the wake of these expositions, artists soon adopted the pictorial elements of these works in their own art. Innovative European artists were inspired by seeing their aesthetic ideas appear in the pure palette, daring visual framing as well as decorative formal construction with an emphasis on contour but lacking modelling and perspective.

French and English artists often incorporated these Japanese stylistic features in their works, while retaining impressionist spontaneity and dynamism. A more abstract Japanese approach appeared during the artistic environment of the fin-de-siécle, when stylised representation grew ever more popular.

The artists active in the Monarchy in the last decade of the nineteenth century were influenced by works melding Eastern and Western elements often without realising the origin of individual pictorial details.

Hence, Japonisme equally reflected the visual approach of the East steeped in tradition and perceived as novel by the West as well as the most modern, contemporary trends of Western art.

The new style gained popularity all over Europe and played an important role in the flourishing of printmaking, a genre that was enjoying a revival at the time. By the 1890s, the Japanese forms of expression and Western Japonisme had become part of the artistic tools of the Secession all over Europe.