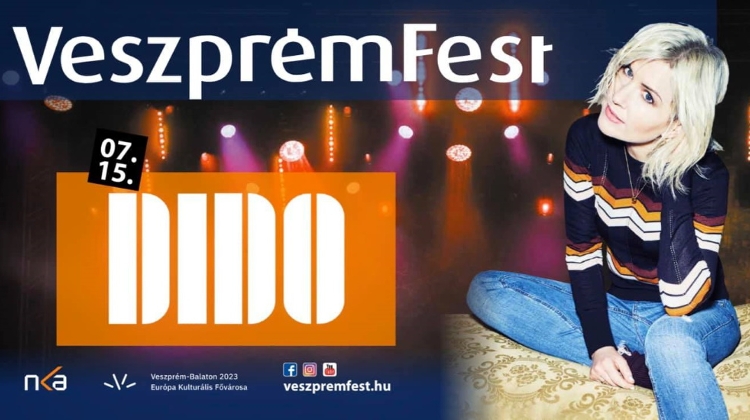 VeszprémFest presents superstar singer Dido on 15 July 2020. During her twenty-year career the singer has never performed a solo show in Hungary, so this concert in Veszprém will be the first where Hungarian fans can enjoy an entire concert with Dido’s emotional and gripping songs.

Dido was born in 1971 as Florian Cloud de Bounevialle Armstrong, and now she is one of the most successful performers in the United Kingdom. She was given her stage name by her mother after the queen of Carthage, and began her music career with the help and support of her brother Rollo Armstrong, a founding member of the music group Faithless.

During her career she has sold more than 40 million records, and her first album entitled No Angel in 2001 was the most popular debut record ever among British female singers.

To this day it has sold 21 million copies and was awarded platinum status in 35 countries. The sweeping success of No Angel not only brought sales figures in the millions, but also a number of awards for the singer, including the MTV EMA and the Brit Awards.

Her next album Life For Rent came out in autumn 2003, and became the bestselling album in British music history. Fans had to wait until 2008 for the follow-up, when the third studio album Safe Trip Home was released into the music stores.

Dido’s fourth disc came out in 2013 with the title of Girl Who Got Away, and her double album, Greatest Hits, came out the same year.

She worked together with her brother Rollo again on her latest album Still On My Mind (2019). The album reflects their attraction to electronic dance music as well as their love for hip-hop and folk elements. Many music critics have praised their collaboration highly, highlighting the modest and subtle features of the music and the beautiful performance of the singer.

Dido’s sparkling career in music is hallmarked among other things by global hits such as Here with Me, Thank You, White Flag, If I Rise or the collaboration with Eminem on the song Stan. Some of these will most likely be heard at the singer’s concert at VeszprémFest too.