EuCham: Hungary One Position Up In "Best European Countries For Business 2020" 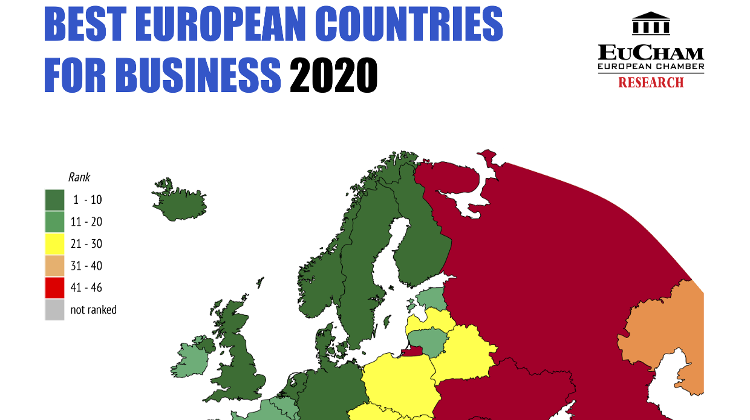 Expat communities are usually aware of the social and economic conditions of the countries they live in. In Hungary, with its controversial public approach, having a critical and conscious opinion of what's going on can help control social life better, especially for career- and leadership-oriented expats, writes EuCham.

In its yearly flagship research "Best European Countries for Business", based on data from the World Bank and Transparency International, this year Hungary ranks one position higher than in 2019.

EuCham president ​Michele Orzan​, who knows well Hungary's economy since 1993, ​says that there are many challenges today, and that a healthier business sector could give a crucial and boost towards a sustainable society.

According to the president, companies should be able to work with integrity, for a correct profit, in a clean and competitive environment.

There is a strong need for the government to ensure a transparent and ethical economy. Hungary has gone up one position since last year and is gaining momentum in Europe, so Mr Orzan acknowledges its better performance in the economic fundamentals, but at the same time suggests it needs to do better in economic freedom and in the integrity sphere.

The manager responsible for the 2020 research ​Cecilia Bottoni​ adds that a development in these fields would bring enormous benefits to the society-at-large and to its overall long-term welfare. Hungary must continue improving.

Regarding Europe as a whole, as in many previous years, Denmark still leads the ranking and wins the prize as the best country for economic affairs and political institutions quality.

While the other Scandinavian countries follow, the Central and East European ones are far from the top: Hungary, for example, is only in the 31st place.

Further considerations can be done about some other countries and their ups and downs. In the ranking, Armenia stands out with its whopping 6 positions up and with Spain, Montenegro, and Azerbaijan have gone up the most.

North Macedonia shows the worst performance, since it has slipped the most (5 positions down).

Regarding the score, the highest level of improvement is shown by Armenia and Kazakhstan. Russia is slightly improving its score, but stays in the same position near the bottom of the list.

Ukraine still remains the last as in the previous year. What is also curious to notice is the positions of some ex Soviets states: ​Estonia, Lithuania and Georgia are outstanding exceptions as they are in the first 20 places.

This rank shows which countries combine integrity of institutions and ease of doing business, offering local people and expats a good environment to live in, work and grow safely, socially and economically.