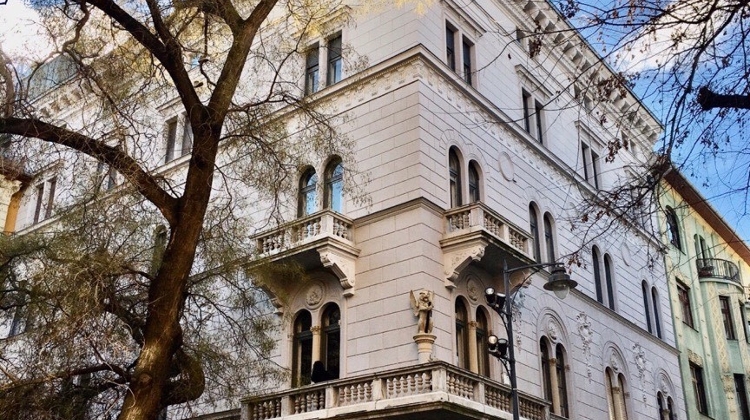 The start of restoration work on Budapest’s once elegant, neo-classical first department store, the 1926 Corvin Áruház, is the latest piece of good news for the inner part of the Józsefváros, christened about twenty years ago the Palotanegyed, or Palace District, reports Mark Higgie for Xpatloop.com. 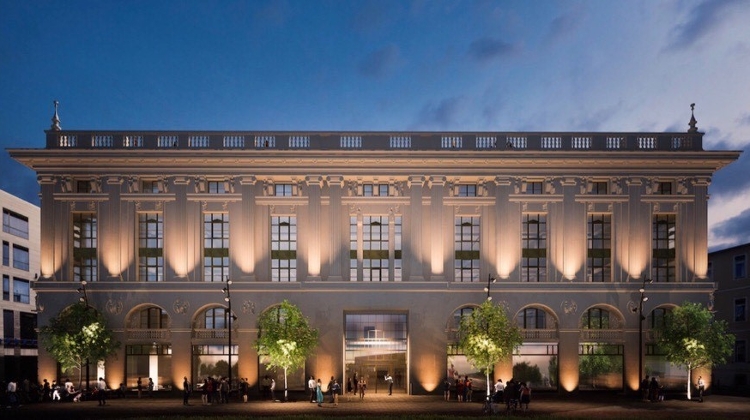 Happily the Corvin restoration will coincide with the long-overdue renovation and upgrade of Blaha Lujza tér in front, long the district’s shabbiest area.

The century between the opening of Mihály Pollack’s magnificent National Museum in 1847 and the end of World War II saw this part of the 8th District – west of the Nagykörút, the Great Ring Road – develop into one of the city’s grandest districts.

The impetus for this was not only the museum, but the establishment in 1866 of the lower house of the Hungarian parliament next door, at what is now the Italian Cultural Institute on Bródy Sándor utca (before 1946 Föherczeg Sándor utca.) 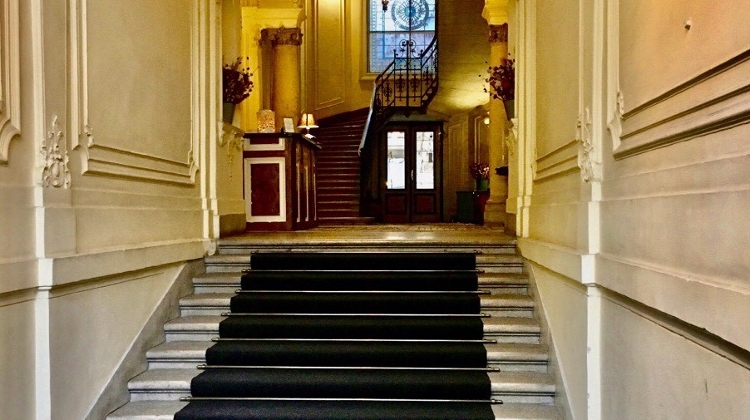 In Baedeker’s 1900 guide to the Austro-Hungarian Empire, he refers to the area around the National Museum as the ‘Magnates’ Quarter’.  Indeed, during the period of the dual monarchy, no other part of Budapest saw a greater concentration of Hungary’s aristocratic and ennobled mercantile elite.

The illustrious Eszterhazys, Festeticses, Károlyis, Banffys, Wenkheims, and many others, built palaces in the area, competing with each for magnificence.  About forty buildings in the district became known as ‘palaces’.

These include both buildings designed for single wealthy families and ones with generously-proportioned apartments for a number of noble and upper-middle  families. (See the excellent Wikipeda article,  https://en.wikipedia.org/wiki/Budapest%27s_Palace_District.)

Despite heavy fighting in the area in both World War II and in 1956, most of the district’s buildings miraculously survived, though usually in battered condition. The communist regime developed plans for the wholesale demolition and redevelopment of the area, but mercifully these came to nothing.

Nevertheless it committed some terrible acts of vandalism, especially the needless demolition of the much-loved 1875 National Theatre on Blaha Lujza tér, designed by Austria-Hungary’s most famous designers of opera houses and theatres, the Viennese Fellner and Helmer.

The regime completed the degradation of the originally charming square in 1967 by cladding the Corvin deparment store in aluminium.  It also demolished Miklós Ybl’s 1858 National Stables between the Eszterházy and Károlyi palaces on Pollack Mihály tér.

The main consequence of the communist period for the district was that it left it dilapidated and shabby – like much of Budapest.  But worse than that, after ‘the Change’, Józsefváros acquired a reputation as the poorest and most crime-ridden of the Pest districts.

This reflected the poverty especially in the outer part of the district and the proportionately high population of typically poor gypsies in that area. This reputation coloured perceptions of the whole of Józsefváros, including of the Palotanegyed – ironically, given the district’s illustrious history. 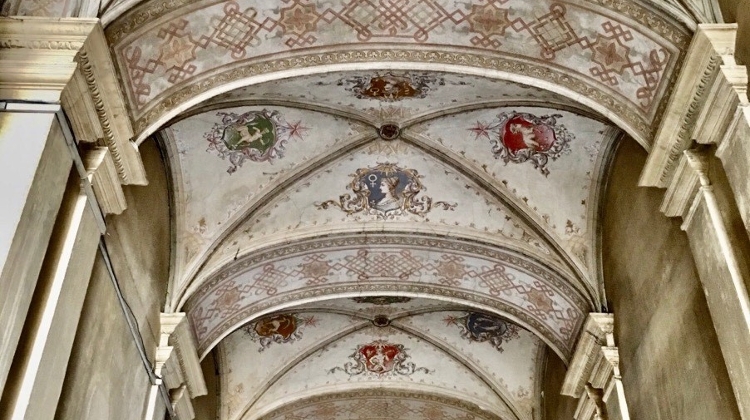 A decade into the new democratic Hungary, I served as Australia’s ambassador in Budapest. My wife and I thought the city was marvellous and we were keen to maintain a long-term link.  She brilliantly found that, in the form of a flat for sale on the top floor of an 1890s building in what is now the Palotanegyed – when it was still just the ‘Józsefváros’.

Everything covered in a thick layer of dust, it had been empty since the Kádár era, had a hole in the ceiling and was unliveable. But it still had all the gracious details of Austro-Hungarian era architecture – lofty ceilings, spacious rooms, beautiful high double doors, original brass window and door handles and fine parquet.

Mercifully no-one had ‘renovated’ it, which often meant destroying the antique charm of such survivals.  Additional pluses were being within earshot of the beautiful bells from the neighbouring Jesuit church and the rare bonus of a balcony.

Hungarians whom we enountered on the diplomatic circuit were horrified by the idea that a Western ambassador could possibly be interested in investing in the 8th district. In their view, the permitted areas for diplomats were the Buda hills, the 5th District, and possibly bits of the 6th District close to Andrássy út.

The only other senior diplomat who encountered more consternation was my German counterpart who invested in an apartment on Klauzál tér, in the heart of the former Jewish ghetto in the much more battered and impoverished inner 7th district.

But in the twenty years since we bought our flat, my wife’s judgment has been thoroughly vindicated – the district’s fortunes have improved dramatically.

Most strikingly, three squares – Szabó Ervin, Mikszáth Kálmán and Lőrincz Pap – were all linked in a pedestrianised precinct which is one of the most charming in Budapest.  Numerous new restaurants and cafés have emerged as a result. 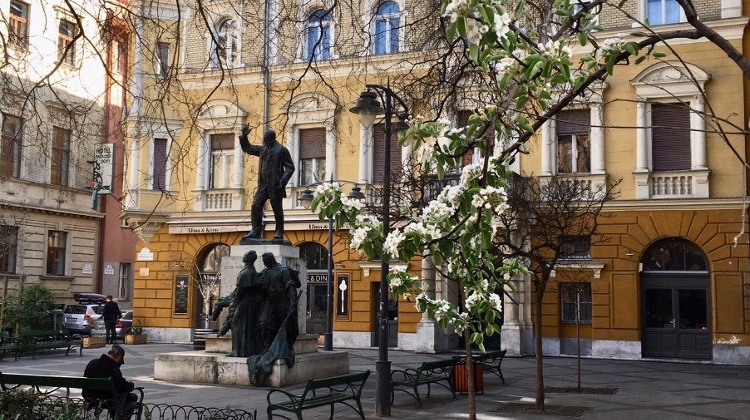 Favorites include Alma és Körte, the Czech Járomir a Templomnál, the Italian Al Dente (run by a superb pizza-maker from Turin), the venerable Zappa, and Fecske, next to the Szabó Ervin Library. (Other fine eateries in the district include the Padron tapas bar on Horánszky utca, the Hungarian-Jewish Fülemüle on Kőfaragó utca, the Épitészpince on Ötpacsirta utca (lovely courtyard in fine weather) and the Múzeum café-restaurant, sadly the sole survivor of the district’s 11 pre-war cafés.)

In recent years many other streets in the district have been attractively upgraded, to limit parking, to make the district more pedestrian-friendly and to bring in more trees – Somogyi Béla, adacent to the Corvin deprtment store, will be the next, as part of the Blaha Lujza tér upgrade.

Dávid  Könczöl of the Józsefváros local council says Szentkirályi utca and the stretch of Krúdy utca between Mária utca and Rökk Szillárd utca are also in the pipeline. 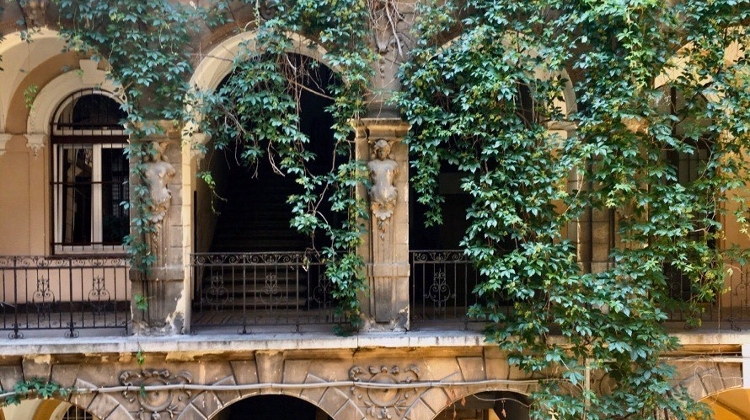 Many marvellous buildings which appeared two decades ago close to the point of collapse – notably the Festetics Palace, supported by scaffolding after 1956, the long-crumbling Reusz-Ráthonyi Palace on Krúdy utca and the until recently even more dilapidated 1842 Virágfüzéres ház (‘Garland House’) on Baross utca – have been beautifully restored.

The Uránia Cinema on Rákóczi út is another reborn district treasure. Designed in a hybrid Venetian Gothic-Moorish style, it opened in the mid-1890s initially as a cabaret theatre. Restored in 2002 to its original glory it was awarded the European Union’s heritage protection prize, Europa Nostra, for outstanding restoration.

There are still fine but neglected buildings where we yearn for the scaffolding to go up and for restoration to start – the spectacular Hungarian-Secession Gutenberg Otthon and the stately Hunyádi Palace on Trefort utca, which could be a Pall Mall club building fallen on hard times, are at the top of many locals’ wish-list.  But the buildings crying out for rescue in the district are now the exception.  Twenty years ago they were the rule.

Hotels have been one of the main drivers of the Palace District’s restoration. The Zichy Palace hotel on Lőrincz Pap tér is one of Budapest’s most comfortable, quiet, lesser-known gems as is the new, stylish Bródy House facing the National Museum.

Another hotel development is in the process of restoring what was until recently the only remaining unrestored building on Mikszáth Kálmán tér.

There is no part of Budapest with a greater concentration of tertiary educational institutions than the Palace District, and many have been in full throttle expanding their investment in the area, turning it even more into Budapest’s university quarter.

The Károli Gáspár University has just completed a major project integrating two of the district’s former Károlyi palaces into its campus (the Múzeum utca one very sympathetically; the Revizky utca one much less so); and according to Könczöl, ELTE plans to integrate various long-vacant buildings on Puskin utca, Szentkirályi utca and empty space in between into its campus.

Most dramatically of all, the Pázmány Péter Catholic University last year received ownership of much of the entire city block behind the National Museum from Hungarian Radio, including its Eszterházy and Károlyi palaces. 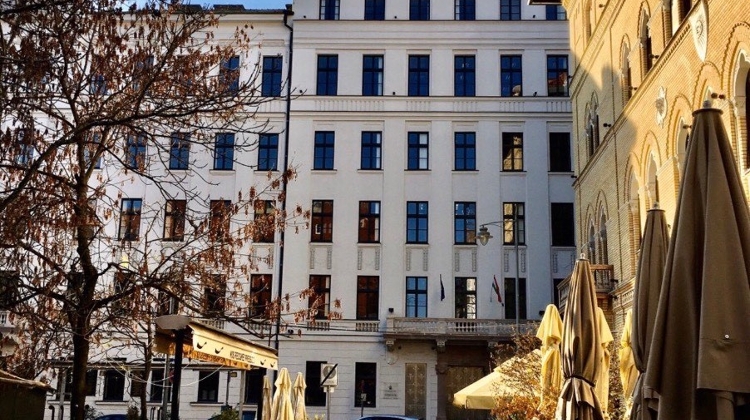 This was in addition to its earlier acquisition of the battered but charming 1855 ‘Keményseprö ház’ (‘Chimneysweep’s House’) on Bródy Sándor utca. The university’s plans may not be revealed for two more years, but it’s expected that happily they will include the demolition of the two hideous communist-era buildings which spoil Pollack Mihály tér.

Könczöl says there is much enthusiasm in the Józsefváros council to fulfill the great potential to make Pollack Mihály tér again one of the great squares in Budapest – indeed of Europe – including by replacing the current paving with greenery, integrating the square with the recently much-improved National Museum gardens, banishing traffic and making it more lively by encouraging café life.

Yet more promising news for the district came with Budapest mayor Karácsony’s recent announcement of his development plans for the city over the next seven years.  These include long-overdue improvements to Rákóczi út and Üllöi út, both on one side in the Palace District.

Despite being lined with magnificent buildings, both have become unlovely major roads, difficult for pedestrians to cross and with long stretches treeless.  While the plan is currently short on detail, the stated aim will be to reduce road traffic, to give preference to public transport, to provide wider pedestrian areas and better provision for cycling and to plant more trees.

The improvements in the Palace District over the past two decades, its increasingly obvious attractions and its inner-city convenience have driven steadily increasing interest from local and international investors, to the extent that real estate values in the area have been approaching those of the 5th District across the Kiskörút.  And all signs point to this charming corner of inner Pest continuing to go from strength to strength.

When in Budapest, Mark Higgie lives in the Palace District