15,000+ 'Save The Bees' Signatures Collected In Hungary 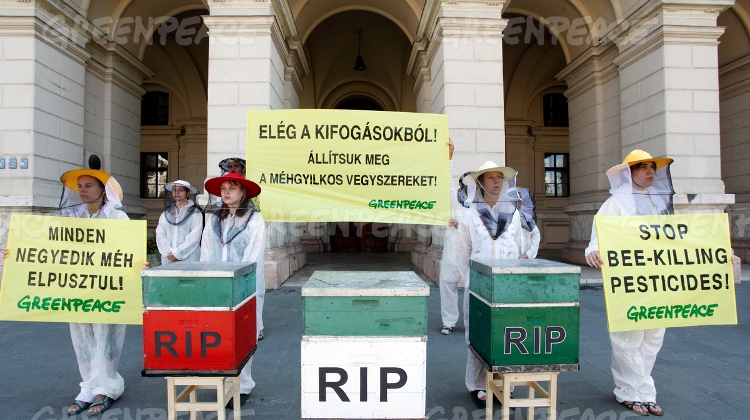 Hungary has been the sixth European Union member state to collect a sufficient number of signatures needed for the success of a European initiative to save bees and farmers, the Hungarian nature protection association said.

By collecting 15,750 signatures, Hungary has fulfilled its share of the total one million signatures needed for the campaign, it said in a statement.

Nearly half of the total number of signatures have been collected so far, the association said.

The European Citizens’ Initiative calls on the European Commission to propose legal acts to phase out synthetic pesticides by 2035, to restore biodiversity, and to support farmers in the transition.

Already in 2017 Greenpeace Hungary held a photo opp in front of the Hungarian Ministry for Agriculture in Budapest to demand a full ban and no derogations on bee-harming pesticides.

Greenpeace activists along with beekeepers stood next to beehive coffins. The joint demand of a wide coalition of Hungarian environmental NGOs was delivered to a representative of the ministry.

In the past, the Hungarian government stated they cannot support an EU ban on bee-harming substances without proper field studies, and requested “emergency” derogations.

However, a field research showed a 24% loss of worker bees in Hungary caused by clothianidin, a neonicontioid.