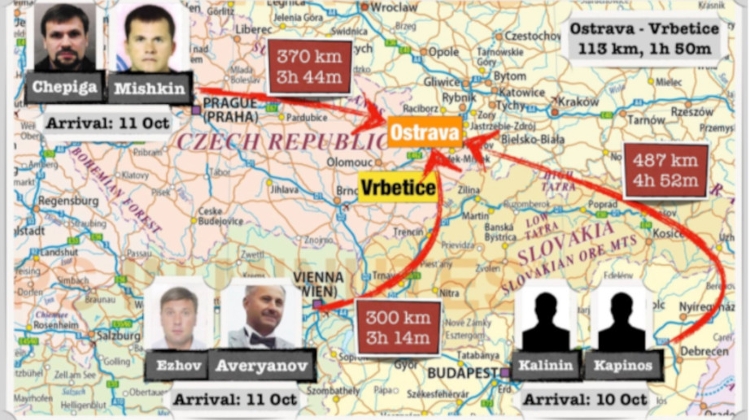 The 2014 Czech explosion scandal is rapidly expanding. Yesterday, demonstrations were held in front of the Russian Embassy in Prague over the alleged Russian involvement in the explosions at an ammunition depot in Vrbětice in 2014.

Soon after, the government announced its hope for support and solidarity on the part of the European Union and its NATO allies. Thus, as Szabad Európa remarked yesterday, “the Czech spy scandal has become an EU-wide issue.”

My first piece on the affair ended by wondering whether Hungary would join Slovakia and Poland in supporting the Czech Republic, as requested by the government of Viktor Orbán’s friend Andrej Babiš.

In vain does one look for any sign of a Hungarian response to the Czech call on the Orbán government’s website, but the Polish government placed the following announcement on their own: “We, the Foreign Ministers of the Visegrád Group, condemn all activities aimed at threatening the security of sovereign states and its citizens.

We stand ready to further strengthen our resilience against subversive actions at both the national level and together with our NATO allies and within the EU. The Foreign Ministers of Poland, Slovakia, and Hungary express solidarity with recent steps taken by our close partner, ally, and neighbor, Czechia.”

According to Paraméter, a Hungarian-language Slovak internet news site, it was Slovak Foreign Minister Ivan Korčok who initiated the V4’s joint declaration. Admittedly, it is somewhat worrisome that the alleged perpetrator of the action is not mentioned by name. But the very fact that Hungary signed this short document is a step in the right direction.

If the Hungarian government failed to reveal its solidarity with steps taken against Russia on its website, what did they say to their domestic audience about this affair?

On April 19, after a lengthy description of Hungarian complaints about Ukraine’s unfair treatment of its Hungarian minority, Péter Szijjártó said that “Hungary expressed its solidarity with Poland over the arrest of the leader of the Polish national community in Belarus and with the Czech Republic over its diplomatic conflict with Russia.”

He added that “Hungary knows exactly what it is like when the rights of a national community are violated, as the Hungarians of Transcarpathia are also confronted with such an attitude.” Thus, the statement of solidarity with the Czech Republic became subordinate to a declaration of support for Poland as it responded to an act against its ethnic minority in Belarus.

Russian criminal activities abroad merited only a few words and were reduced to a “diplomatic conflict.” It is true that MTI summarized the content of the document, but Magyar Nemzet simply said that the Polish, Hungarian, and Slovak foreign ministers “condemn all activities that threaten the security of sovereign states and their inhabitants.”

Expelling 18 Russian diplomats from the Czech Republic was a very strong response to the revelations of Russian involvement in the explosions. Past experience suggested that the “aggrieved” partner would “outdo” the original slight.

And indeed, in no time, 20 Czech diplomats had to leave Moscow within 24 hours. That meant that the Czech Embassy would be left practically unattended.

Perhaps because of the Russian response, Prime Minister Babiš tried to appease the Russians by saying that “Russia did not attack the Czech Republic but the goods of a Bulgarian arms dealer who was probably selling these arms to parties fighting Russia.” Opposition politicians, however, were not in the mood to mollify the Russians, and thus Babiš was forced to retreat.

Bulgarian-Russian affairs are not in the best of shape either. In March, Bulgaria expelled two Russian diplomats accused of spying after Bulgarian prosecutors indicted six people, including current and former military intelligence officers, for spying for Russia.

According to Bulgarian authorities, the spy network passed classified information to the Russian embassy in Sofia about Bulgaria, NATO, and the European Union. Given the already strained relations between the two countries, it is not surprising that Ekatrina Zahavieva, Bulgaria’s foreign minister, expressed full solidarity with the Czech Republic against the violation of its national sovereignty by Russia.

This was pretty much expected considering that the ammunition stored in Vrbětice belonged to a Bulgarian arms dealer whom the Russian agents subsequently tried to poison in order to prevent the shipment of arms and ammunition to Ukraine.

Zahavieva also expressed “full solidarity with Ukraine over Russia’s dangerous escalation of tension at its borders in recent weeks, [which] is absolutely unacceptable.” Long gone is the traditional friendship between Bulgaria and Russia.

There is no question that Slovakia will stand by the Czechs. As Foreign Minister Korčok put it, “we will decide in such a way that there is no doubt where the Slovak Republic stands” on that issue. At the same time, he saw “an opportunity to develop a clear position within the V4 on the situation in which the Czech Republic has found itself.”

International opposition to Russian aggression and the brazen activities of the GRU, the foreign military intelligence agency of the Russian Armed Forces, in Great Britain and countries of the European Union will make it difficult for the Orbán government to stand by Vladimir Putin’s Russia.

This is especially the case since in the last few hours further details emerged, thanks to the joint work of Bell¿ngcat, Respekt, The Insider, and Der Spiegel, which puts Budapest at the center of a six-man Russian operation.

The operation was apparently organized and directed by two highly placed operatives, Alexey Kapinos and Evgeniy Kalinin, who under their own names but with diplomatic passports landed in Budapest, allegedly carrying mail to the Russian Embassy.

Kalinin is assumed to have been supervising agents Anatoliy Chepiga and Alexander Mishkin. It was these two who most likely masterminded the attack in the Czech Republic.

The investigation is far from finished; more revelations are promised.