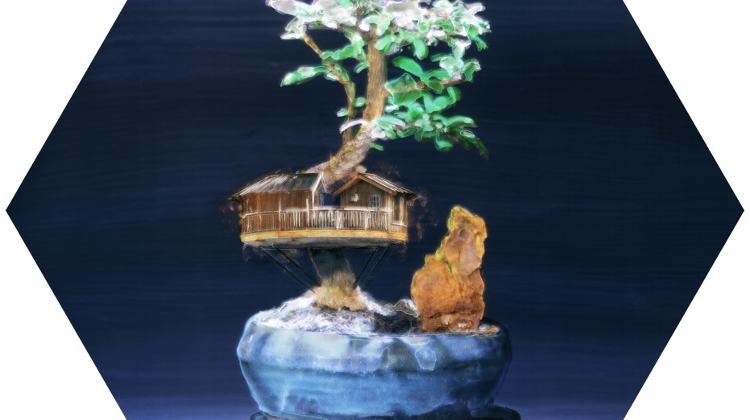 In her fourth exhibition at the Ani Molnár Gallery, entitled Terra incognita, Éva Mayer focuses on the theme of conception, or its absence in the form of infertility, which concerns not only our personal lives but has societal implications as well.

This time around, the honeycomb motif – a clear reference to the subject of fertility – forms the basis of her complex visual system.

Of the 26 hexagons of various sizes, some contain graphic works, which open up a new microworld. Intimate images of tree houses concealed in the foliage of bonsai trees – small plants that radiate a sense of growth and biological genesis – point to an internal world as symbols of successful conception.

Another group of the works, however, allude to processes of infertility. The images were created through a unique technique developed and employed by the artist: Éva Mayer paints on glass plates and then scans them.

After further modifying the resulting digital images, she finally prints them on paper. The hexagonal shapes contain not only images, however, but illuminated, superimposed pieces of tracing paper as well, containing fragments of writing, obtained from women’s groups.

The group of works entitled Forwarded Message also takes objects from private life and lines them up on a shelf: the candles, the hospital, and the written messages to unborn babies placed in bottles, blurred by the glass, all represent events of an inner processes.

Éva Mayer (1983) was born in Bratislava, lives and works in Šamorín and in Budapest. She graduated from the Hungarian University of Fine Arts in 2008 with major in prints and visual teacher. In 2018, she obtained a PhD degree in the Doctoral School of the same university. In 2013, she was awarded the Mihály Munkácsy Prize in recognition of her professional work.

She was in Cork, Ireland with a scholarship in 2007. She is engaged as a researcher at the Academy of Fine Arts in Prague in 2015. She regularly exhibits in Hungary, Slovakia and other countries as well.

She is also active as an organiser and a curator, for instance she has been organising an international art colony named DUNARTCOM in Šamorín since 2011, Slovakia.

Since 2014 Éva Mayer has taught at different universities, today she is associate professor at the Institute of Animation and Media Design, Metropolitan University of Budapest.