Covid Immunity Rate Now as High as 65-70% in Hungary 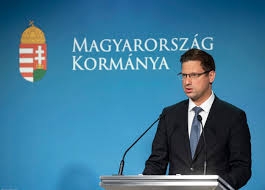 Although they show minor differences, all coronavirus vaccines distributed in Hungary are safe, and the government calls on all Hungarians to register and accept a vaccine, the prime minister’s chief of staff, Gergely Gulyás, told an online press briefing.

Of the nearly 3.7 million fully vaccinated Hungarians, over 8,100 have contracted Covid-19, and 524 of them have died, he noted.

So far, 54% of Hungarians have been inoculated, bringing the country to the cusp of herd immunity, Gulyás said. Including those who have gained immunity by recovering from the disease, immunity in the country may be as high as 65-70%, he added.

Hungary currently has a surplus of all vaccines, and those registering now will be able to get any of the jabs within a short time, he said.

Meanwhile, the third wave seems to have subsided, and infection numbers are nearing those seen last summer, he said.

On the subject of immunity certificates, Gulyás said the digital version of the Hungarian document will meet all European Union regulations on digital Covid-19 certificates by June 15.

The digital version of the Hungarian certificate, in line with EU regulations, will show the type of vaccine administered and the dates of the jabs, he added. He said Hungary’s immunity certificate currently provided the widest freedom in Europe because agreements have been made with 11 countries about its recognition.

EU countries are mandated to accept all vaccines approved by the European Medicines Agency (EMA), and are at liberty to decide to accept others, Gulyás said.

Hungary has concluded agreements with several (non-EU) countries to accept all vaccines used in Hungary, including the Chinese Sinopharm vaccine, which has been approved for emergency use by the WHO, and Russia’s Sputnik V jab, Gulyás said.

“Hungary expects near-total freedom of travel within the EU, unless infection rates and low inoculation numbers in other countries raise cause for concern.”

Hungary will use part of its surplus vaccine stock to inoculate Transcarpathia Hungarians, who are the only Hungarian community across the borders without access to the vaccine, he said.

In response to a question, Gulyás said immunity certificates will remain mandatory to enjoy certain services for a period depending on the level of coronavirus infection in Hungary.

He added that the same applied to the mandatory use of masks and other protective measures, which he said would only stay in force until necessary.

Gulyás said several hundred thousand doses of vaccines were still on stock. These might be needed in the future because a third booster shot might become necessary. At the same time, Hungary will help out countries where the vaccination rate is not as good as in Hungary, he added.

Two million Hungarians remain unprotected from coronavirus as they have neither accepted the vaccine nor have recovered from the disease, he said.

Commenting on the recent arrest of a Hungarian Islamist youth planning a terrorist attack, Gulyás said it was a good sign that the Hungarian authorities had intervened in the preparatory phase and made every effort to ensure everyone’s security.

Asked about a proposal by Budapest’s 9th district local council to rename streets around the site of a new campus for China’s Fudan University, Gulyás said it was “childish, but at least funny” that the mayor had chosen “diplomatically sensitive street names to try to provoke China”.

“If this is what the metropolitan council and the 9th district want to do to express their political ideas, then all I can do is wish them the best of luck with it,” he said.

As regards a potential visit to China by the prime minister, Gulyás said that although Viktor Orbán had an invitation to the country and an autumn visit was on the cards, “this has nothing to do with Fudan University”.

“Fudan University’s Budapest campus is on the drawing board but no substantive decision has been made yet, so there’s no reason for the uproar on the left,” Gulyás said. “Once the plans are finalised, the government will be able to decide whether or not it supports the project.”

On another subject, Gulyás noted that Hungary was one of five EU countries that has decided not to join the newly launched European public prosecutor’s office (EPPO). He said the reason for this was that there were certain areas where greater integration would be harmful to national sovereignty.

Gulyás also said that the head of the EPPO, Laura Kövesi, was unfit to lead the office, arguing that her appointment would hurt the effectiveness of the organisation after she had “prosecuted Hungarian politicians in Romania based on trumped-up charges” and she herself had been prosecuted.

Asked about European commissioner Vera Jourová’s announcement that the commission was set to activate the bloc’s rule-of-law conditionality mechanism against Hungary and Poland in the second half of the year, which could result in the suspension of funding for the two countries, Gulyás said Jourová was unfit for her post because of her “anti-Hungarian views”.

He said Jourová, who in the past had been “in pre-trial detention for corruption”, was “berating Hungary and Poland to win over the good graces of the liberal media and to keep her past a secret.”

As regards the planned reform of the EU’s Common Agricultural Policy, Gulyás said that although the bloc’s 27 agriculture ministers could come to an agreement on the new policy on their own, the European Parliament “has completely absurd demands that go against the interests of the agriculture sector”.

Commenting on EP President David Sassoli’s recent remark that EU institutions will not turn their back on the migrants in need of rescue in the Mediterranean, Gulyás said it was “comments like this” that were to blame for the plight of migrants hoping to reach Europe.

Unless Europe makes it clear that it will defend its external borders and decides not to let illegal migrants onto its territory, more and more people will risk their lives on their trek towards the continent, he insisted.

“We continue to be on the side of providing help, but help should be provided at the point where it is needed instead of bringing trouble over here,” Gulyás said.

Asked what sort of diplomatic steps Hungary has taken in response to the forced landing of a Ryanair jet in Belarus last month, Gulyás said Hungary had protested the incident and joined an EU declaration condemning it.