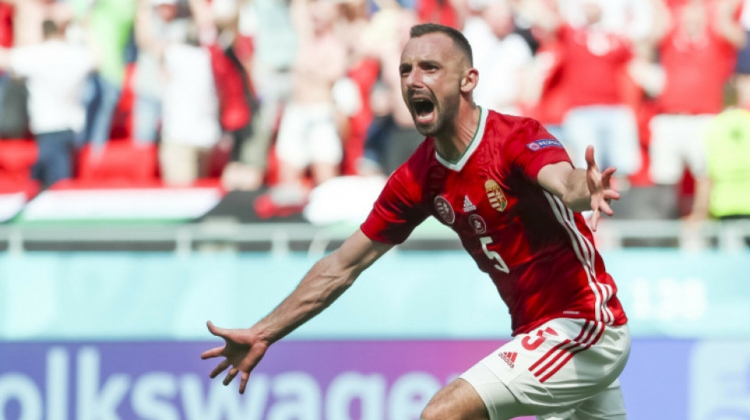 Although Antoine Griezmann equalised from close range midway through the second period, Marco Rossi's hosts can be immensely proud of their 1-1 draw and a brave, invigorating performance.

Hungary head coach Rossi had decided to retain the same 3-5-2 formation as against Portugal with just one change, Loic Nego coming in for Gergő Lovrencsics at right wing-back and Attila Fiola staying in a less familiar position on the opposite side.

Hungary were combative from the outset but France certainly weren't shirking any challenges either and many people's tournament favourites soon started to show their class.

In the 13th minute, Kylian Mbappe's low shot towards the far-left corner of the Hungary goal was partially saved by Gulácsi but with the goal at his mercy, Antoine Griezmann was thwarted by Hungary's recovering goalkeeper from the rebound, albeit the Frenchman was then given offside anyway.

Still the French forwards kept coming and in the 33rd minute Mbappe jinked through on goal on the right side of Hungary's box but could only drag his shot wide of the far-left post. Just when it seemed though that it would only be a matter of time until France broke through, Fiola turned the game entirely and sensationally on its head, the Fehérvár defender receiving a long, cross-field pass on the left wing, exchanging passes with Sallai inside him, then surging into the France penalty area and slipping the ball inside Hugo Lloris's near post to spark incredible celebrations both on and off the pitch.

Half-time came and went, a 15-minute party in the Puskás Aréna tribunes gladdening the hearts of all Hungarian fans present, before normal service was resumed, France forging forward, Hungary defending courageously and stealing possession as often as possible.

Just before the hour, France substitute Ousmane Dembele rattled Gulácsi's near left post with a rising drive from a tight angle on the right side of the penalty area.

A few minutes later, France finally managed to breach Hungary's hitherto watertight but now tiring defence, Mbappe's low cross from the right - after Lloris's long kick hadn't been dealt with by Nagy or Nego - being half-cleared by Orbán, only for Griezmann to sweep the ball into the net barely ten metres from goal.

The relief on French faces was evident but instead of inspiring an epic onslaught on Gulácsi's goal, that cathartic equaliser led to a collective becalming as both sides seemed to succumb to the 30-plus degree heat in which they'd been baking for more than an hour.

The game moved almost at walking pace at times thereafter but France raised themselves just enough to create one more clear opportunity, Mbappe finding space on the left side of the penalty area but then seeing his fierce shot beaten out well by the ever-alert Gulácsi in the 82nd minute.

That helped secure a famous draw for Hungary and now a win in their final group match against Germany on Wednesday could even see Rossi's charges reach the round of 16.

Rossi: I can be proud of my players

According to their head coach, the Hungarian national team took another step forward in their 1-1 draw with world champions France and Marco Rossi is confident that the development of the team will continue unabated.

In their second match of this year's European Championship, this time against France, Hungary secured a 1-1 draw with a tremendous performance, which has caused one of the biggest surprises of the tournament so far.

Marco Rossi was quick to emphasise how proud he is of his players:

“We had a few difficult days after the defeat against the Portuguese, and I didn’t think we would be able to deliver such a performance (as we did today). We should be happy not primarily because of the result, but because of the way we played, so the players can also be very proud of themselves.

Our defence did a tremendous job, our inside and wing defenders were very good and the same is true for our midfielders. I am glad that the process of improvement that has been a feature for a long time has continued.

The players will continue to develop, especially in attitude, and I hope we can take this further and even take another step forward against Germany. In today’s match, France's technical superiority was significant, but we were able to compensate for this with motivation and by playing with huge heart.

I am grateful to the players and encourage them to continue the work they have started and the development they have made.

Hungarian support is unparalleled in Europe and the world and we work hard to make our fans happy with us. This match was a two-hour adrenaline bomb, with plenty of emotion and tension for the fans too".

In response to a question from a journalist, the Italian coach of Hungary revealed that this day had been one of the most beautiful days of his coaching career.

“I’ve always watched the European Championships on television, and now I’m looking around here as amazed as kids are at a amusement park. Once we’re here at the amusement park, we also want to play and we want to perform well, but at the same time we have to keep our feet on the ground.

We’re going to Munich now and we'll try to give our maximum there too,” added Marco Rossi.

It wasn't only the Hungarian head coach but also his French counterpart who praised the Hungarian team. According to Didier Deschamps, Hungary played very well in parts and adapted better to the great heat than his own players.

"The first 10-15 minutes were very hectic and we had a hard time settling into the match, but then our performance improved. We found space on the wings and created opportunities, even if we failed to score from them", Deschamps admitted.

"At the end of the first half we got a kick in the stomach with the Hungarian goal. It must be admitted that in some parts Hungary played beautifully in front of their own crowd; they gave it their all and defended very well. We equalised in the second half, and didn't give up for even a minute.

I knew that if we didn’t put everything into it, we couldn’t win. It seemed that we had a harder time in this heat than the Hungarians, and in the midst of these difficult conditions, they were more dynamic; in this match we were not as fresh as we could have been.

Our goal is to advance from the group, so the four points we've scored so far are not bad for that, but it'd have been better if we could have earned three more points".