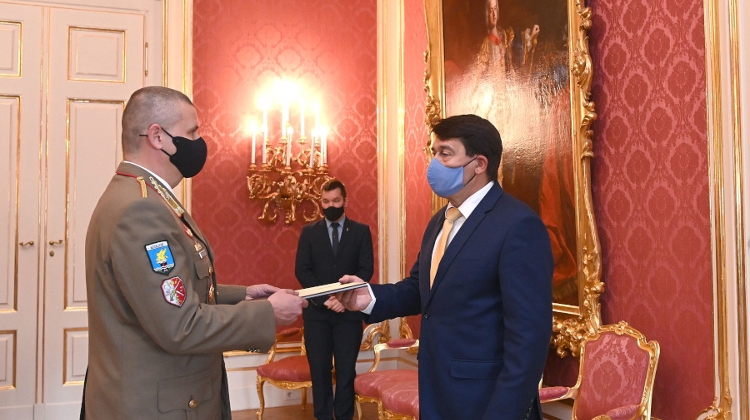 Prime Minister Viktor Orbán said Hungary’s troops had proven over the course of a series of international exercises and missions “that they are just as good, if not better, than their foreign peers, earning their right to serve their homeland.”

The government in 2010 had to fix the country’s finances before it could proceed with developing the military, he said.

After successfully strengthening the country’s economic and family policies, the government needed stability, predictability and money to develop a competent army and military industry, he said, praising Defence Minister Tibor Benkő for his efforts “in getting Hungary this far” and Ferenc Korom, the former commander of the armed forces, for his role in “guiding the army from a state of hopelessness to one of hopefulness”.

Hungary’s allies won’t defend the country in its stead, “only together with us”, he warned. The prime minister also thanked Hungary’s soldiers for their contribution to the country’s pandemic defence efforts.

Hungary's task is to develop a strong and modern army that is capable of deterring anyone from attacking the country, Viktor Orbán has said.

Speaking at the inauguration ceremony of the new Commander of the Hungarian Armed Forces in Parliament over the weekend, the prime minister said: “If there’s trouble, then we’re the ones who have to defend the homeland.”

The new commander, Major General Romulusz Ruszin-Szendi, has been tasked with integrating the army into Hungarian society, “winning over tens of thousands of young people” and training them to defend the homeland and respect military ideals, he said.

Hungary’s political leadership “made a serious mistake” before 2010 by abolishing conscription to military service without building up a modern and competent army first.

“Luckily we weren’t forced to defend the homeland in an armed conflict during that time,” he said. The absence of a strong army, Orbán added, had been “unworthy” of Hungary’s centuries-long military traditions and international obligations.

The government that came to power in 2010 inherited a weak country and a weak military “and all it could put its faith in was its NATO membership,” he said.

Ruszin-Szendi Inaugurated as Commander of the Hungarian Armed Forces

Major General Romulusz Ruszin-Szendi was inaugurated as Commander of the Hungarian Armed Forces in Parliament on Saturday.

Ruszin-Szendi’s mandate is from June 3, until May 31, 2026, according to a resolution issued by President János Áder. At the inauguration ceremony, Ferenc Korom, the former commander, handed over the flag of the Command of the Hungarian Armed Forces to his successor.

Addressing the ceremony, Defence Minister Tibor Benkő praised Korom’s accomplishments, including the establishment of the headquarters of the Central European multinational division based in Székesfehérvár and the Regional Special Operations Component Command (R-SOCC) in Szolnok, in central Hungary, as well as the management of the military’s contributions to the country’s pandemic defence efforts.

Turning to the new commander, Benkő said Ruszin-Szendi would have to take over ongoing tasks and take on new ones.

These, he noted, included the procurement of new equipment and staff-related duties such as the continued development of the military career model and streamlining the system of volunteer reservists.

The minister said Ruszin-Szendi would only succeed in his role if he were “strict, demanding, consistent, humane and a role model”. Benkő nominated Ruszin-Szendi for the post of commander of the armed forces earlier this week after President János Áder relieved Korom of his duties.

In a hearing before parliament’s defence and law enforcement committee on Tuesday, Ruszin-Szendi said his most important task was to continue developing the Hungarian army as a leading force in the region.