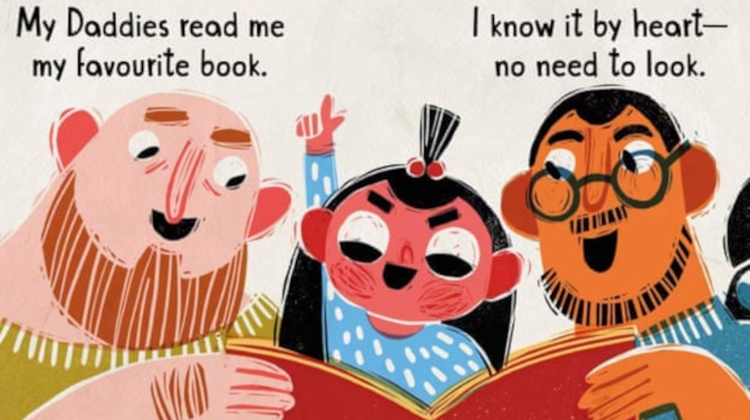 A bookshop chain in Hungary has been fined for selling a children’s story depicting a day in the life of a child with same-sex parents, without clearly indicating that the story featured “a family that is different than a normal family”.

The picture book, Micsoda család!, is a Hungarian translation of two titles by US author Lawrence Schimel and illustrator Elīna Brasliņa: Early One Morning, which shows a young boy’s morning with his two mothers, and Bedtime, Not Playtime!, in which a young girl with two fathers is reluctant to go to sleep.

Pest county government commissioner Richard Tarnai said the distributor had misled customers by placing the book in shops among other children’s books without clearly indicating its “different” content.

This book was placed among other books of fairy tales and this way they breached the law,” told the local government official to commercial channel HirTV. “The unfair practice is when you cannot see that a family different from a normal family appears in this book. If this notice is there, it’s OK.”

The distributor Líra Könyv must now pay a fine of 250,000 forints (700 euros) under legislation that bans unfair trade practices and will now put up a sign warning customers that it sold “books with different content than traditional ones”.

“It is a coordinated attack, they are trying different methods in order to create fear about talking about rainbow families and other issues that exist in the world,” said author Lawrence Schimel to Reuters.

The Foundation for Rainbow Families, publisher of Early One Morning, reacted in a statement on its Facebook page that the book had helped the roughly 1,000 “rainbow families” in Hungary, which refers to parents of the same sex bringing up a child, or to an LGBTQ+ parented family.

The fine was imposed under a Hungarian law that bans unfair trade practice, but comes during a wider crackdown on LGBT rights in Hungary, under the government of Prime minister Viktor Orbán.

A widely criticised new law was initially designed to combat pedophilia and strengthen the punishment for convicted pedophiles was passed earlier this month by the Hungarian Parliament and signed into law by President János Áder.

An amendment was later added banning the portrayal or promotion of homosexual content to minors and only allow government-approved people to teach sexual education in Hungarian schools.

The legislation prompted large demonstrations in Budapest and was met with immediate public outcry, with critics accusing the Hungarian government of likening homosexuality to pedophilia and of severely restricting young people’s ability to learn about issues pertaining to sexual orientation and gender identity.

The Hungarian government has dismissed the accusations, saying the law had been misunderstood and was primarily meant to protect the rights of parents to educate their children as they see fit when it comes to sexual matters.

“I am defending the rights of homosexual guys, but this law is not about that. It’s about the rights of the kids and the parents,” PM Orbán said.