Opinion: UEFA Punishes Hungary for the Behavior of its Fans 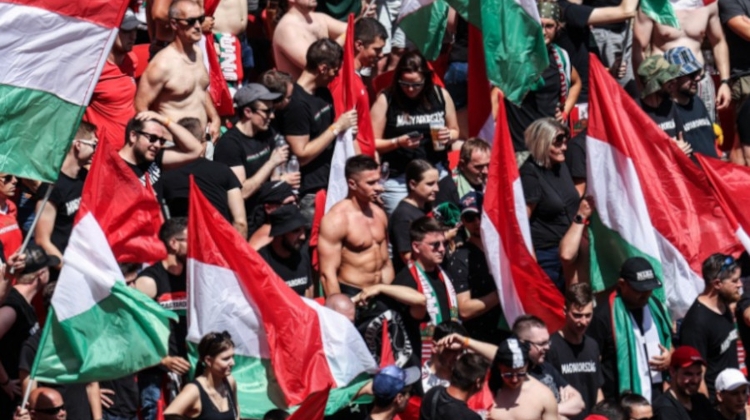 You may recall that the management of the Carpathian Brigade ’09, a group of football fans, asked its members “not to give in to any provocation” during the German-Hungarian game in Munich because “under German law, you can easily be taken away on trumped-up charges, and you can be heavily fined.”

The warning didn’t achieve its aim. 444 reported that Hungarian fans shouted homophobic slurs at the Germans, and some of the people from the Hungarian group threw bottles at the police. In the end, 18 arrests were made.

After the games held at the Puskás Aréna, I didn’t hear about any commotion in or around the stadium.

The Union of European Football Associations (UEFA), however, found the behavior of some Hungarian fans objectionable at all three Hungarian games and fined the Magyar Labdarúgó Szövetség (MLSZ) a whopping €100,000 and ordered its next three home matches to be closed to spectators.

According to UEFA, at the Hungary-Portugal game anti-LGBTQ banners were displayed and the fans chanted “Christiano homosexual.” During the French-Hungarian match some of the spectators kept repeating “Buzi franciák bonjour.”

In Munich, the favorite jingles were: “LGBTQ? Nein, danke” and “Deutschland, Deutschland, homosexual.”

The news stunned official Hungary. The state television station’s favorite anchor, Balázs Németh, was so furious that he could only blurt out: “Shame on the UEFA!” He insisted that it had been a long time since he had been to a more sportsmanlike match. He accused UEFA of punishing Hungary for its stand on the Black Lives Matter and LGBTQ movements.

Foreign Minister Péter Szijjártó completely lost his cool and accused UEFA of hiring whistle-blowers with the mentality of members of Kádár’s Workers’ Militia, “who have no other job than to write reports on who said (or didn’t say) what in the stands.

As in communism: no proof is needed.” Infractions committed by others are overlooked, he continued, but “to organize a sold-out game, to cheer, to create a great atmosphere; well, that’s why the stadium has to be closed.” And, he concluded, “the committee that makes such a decision is a pathetic and cowardly body. Shame on them!”

According to István Hollik, the communication director of Fidesz, “UEFA and Brussels think that by attacking Hungary they are weakening us. They still don’t know us! We draw our strength from these unjustified and baseless attacks!”

György Szöllősi, formerly the communication director of the Puskás Academy and currently editor-in-chief of Nemzeti Sport, Viktor Orbán’s favorite newspaper, devoted a long editorial titled “Say no to EUFA” to the topic. Its message is most likely shared by the Hungarian prime minister.

“No wonder that our hands are clenched at the ruling on the pitch closure” especially after “the best-attended, best organized games” in Budapest “where every match was a celebration of football.” According to Szöllősi, “anyone who thinks that any racism was present is a liar.”

From this editorial it becomes clear that the Hungarian government counted on additional games being held in Budapest due to the strict British quarantine rules. They are convinced that UEFA persuaded the English to loosen the restrictions “at least enough to prevent the truth that Budapest could have had more spectators.”

The European football association, instead of being appreciative, makes audio and video recordings by members of the “Fight against racism in Europe,” an arm of the European Commission, which Szöllösi calls “a kind of inquisition organization.”

The most extreme piece of writing was surprisingly published by Mandiner, which is considered to be a more moderate Fidesz site. The author, István Szebeni, is co-anchor of TV2’s news program Facts.

He is full of wrath at Europe, the traitor, because “it is a collection of rootless, mother-tongue-less, corrupt, tyrannical, slave-owning countries which set the world on fire and exterminated millions and who are now playing saints and judging us. We who have fought our battles against the eternal oppressors for 1100 years.”

It matters not what our irate Szebeni thinks. According to the rules of association, if “one or more supporters engage in racist bashing” the member football association can be punished by partial closure.

Still, the general impression remains that the punishment may not be commensurate with the infractions. Telex rightly pointed out, however, that Hungarians can be angry at Viktor Orbán and other politicians “who have used their excellent sense to stir up EU public opinion with anti-gay sentiment in Hungary ahead of an important international competition and inevitably put the team in a difficult position.”

The politician who was most criticized with respect to the UEFA fines was Péter Szijjártó.

Ferenc Dávid, formerly secretary-general of the National Association of Entrepreneurs and Employers who has been writing intelligent political commentaries lately, noted that the Hungarian Football Association has an able spokesman in the top management of UEFA, Vice-President Sándor Csányi, who certainly has an opportunity to express his views on the matter.

It is not only unnecessary but outright harmful for a high government official, especially a foreign minister, to get involved in the affairs of an international controversy on a matter not in his purview.

Dávid also called attention to the fact that this is not the first time that Hungarian fans have violated the rules of UEFA. “The limitation period for disciplinary sanctions for ‘racism and other discriminatory behavior’ is three years.

The Hungarian national team received disciplinary sanctions from UEFA twice in the last three years: in March and September 2019.”