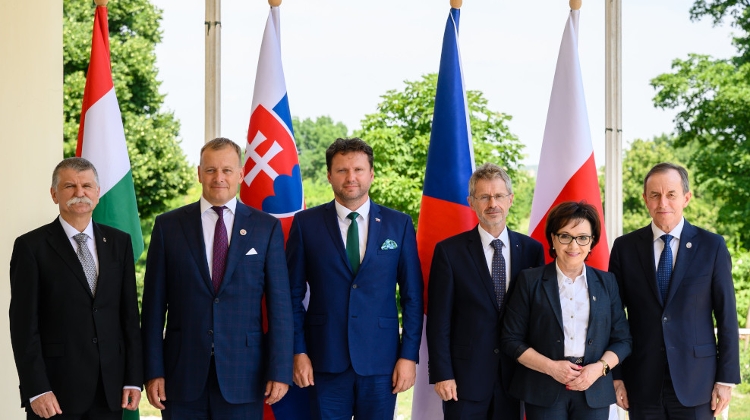 The countries of the Visegrad Group are working towards forming a common position on the future of Europe, House Speaker László Kövér said after a meeting with V4 counterparts from Slovakia, the Czech Republic and Poland on Friday.

The V4 countries aim to develop a position which people can identify with in Brussels and in every EU member state and which concerns not only interests but also values.

They would like to participate in the debates about the future of Europe as equal partners and want the opinions of national parliaments to be taken seriously, Kövér said.

He called the past 10 years of Visegrad cooperation a success story based on “the best intentions by all participants, seeking links rather than divisions”.

He noted that the region’s countries shared not only a history in the past but interests in the present, adding that their infrastructure cooperation projects, such as building south-north transport and energy networks, were “filling hundred-year gaps”.

The participants focused on efforts to protect central Europe’s heritage and issues around a central European identity, and showed a “surprising and refreshing harmony”, he said.

The meeting was attended by Boris Kollár of Slovakia, Radek Vondráček and Miloš Vystrčil of the Czech Republic, as well as Elżbieta Witek and Tomasz Grodzki of Poland.

In the forthcoming year, the actions of the Hungarian presidency of the Visegrad Group will be governed by the conviction that the member states — the Czech Republic, Hungary, Poland and Slovakia — have a vested interest in each other’s success, stability and prosperity, Zsolt Németh, head of parliament’s foreign affairs committee, told MTI on Saturday.

Earlier in the day, Németh, along with Martin Klus, state secretary at the Slovak Foreign Ministry, and József Berényi, Slovakia’s former state secretary of foreign affairs, held a forum on relations between the V4 presidency, central Europe and the European Union at a student camp of Slovakia’s ethnic Hungarian community in Gombasek (Gombaszög).

They termed the voluntary nature of Visegrad cooperation as an asset, enabling the member countries to cooperate just in the fields of shared interests, he said. It is another common feature that the Visegrad countries highly value freedom and reject external pressure, Németh said, referring to recent “moves by the European Union which can be seen as a kind of external pressure”.

The single issue of disagreement was dual citizenship as the Hungarian government insists on granting Hungarian citizenship to ethnic Hungarians in Slovakia, he said.

The incumbent Slovak state secretary, Németh said, was open to further consultations, stressed the need to amend the relevant law, and expressed hope that “the issue would be settled in a reassuring way” once the Hungarian community would once again be represented in the Slovak parliament.