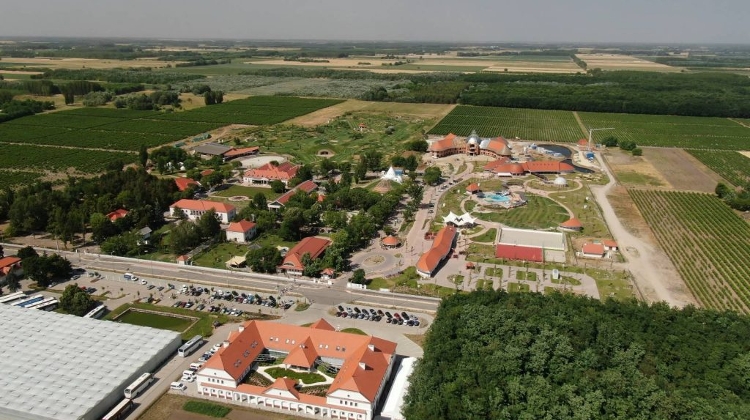 30 billion forints of public money and a lot of imagination was needed to create the Hungarikum Park, a brainchild of Sándor Lezsák, MP (Fidesz), poet and deputy speaker of the National Assembly.

There is a riding school in the shape of a “turul” (a mythical bird in the Hungarian and Turkish tradition), a “wine cathedral”, a footgolf course, a wellness hotel, a network of roads in the shape of the “miraculous stag” (a character in Hungarian mythology), a house for the so called “Hungarikums” (typical Hungarian products and features) and even a planetarium.

Lezsák gave us a guided tour of the place, where we were able to see the completed and ongoing projects from above with the help of a camera drone.

23 kilometres from the town of Kecskemét, Sándor Lezsák’s empire has grown out of the field.

The Hungarikum Park is located on the edge of Lakitelek, a town of 4.500 inhabitants, and is marked by a special road sign, as a completely new part of the town was created there for this 30 billion forint project.

The Deputy Speaker of the National Assembly personally gave our crew a tour (a rare gesture these days, and we thank him for it – ed.).

First we were shown a film about Lakitelek, which Lezsák recently presented to Prime Minister Viktor Orbán as well, who “really liked the it”.

The Hungarikum Park is a faithful reflection of the current government’s cultural policy, and that the Deputy Speaker of Parliament has very good relations with the government.

Today, however, the venue owned by the Roman Catholic Diocese of Szeged-Csanád, headed by László Kiss-Rigó, who campaigned for Fidesz.

It’s no secret that the Bishop of Szeged is interested in large state-funded projects, for example, he has previously received 14 billion forints to build a football stadium.

The change of ownership came about because of the accumulated debts of the People’s College: in 2000, the Diocese of Szeged-Csanád paid for the debts in exchange for its real estate, in a way that Lezsák’s foundations will be managing it for another 20 years. The place was handed over to the diocese in 2020.

In the past 10 years, the People’s College Foundation has received a generous amount of public money: the state has provided HUF 30 billion for the construction works alone.

The Folk High School Foundation started in 1992 with just three buildings. Lezsák has repeatedly stated that “People’s College” was the maiden name of the Hungarikum Park.

Today, even the buildings are hard to count, and the original People’s College, which covered an area of 4 hectares, has since grown to 26 hectares.

Documents provided to us by Lezsák show that in 2020, the planned net revenue of the People’s College Foundation was HUF 604 million, but due to the pandemic, the net revenue ended up being HUF 355 million.

In 2020, maintenance costs alone amounted to HUF 1 billion 363 million. The largest expenditure was on salaries, which amounted to HUF 656 million, and central administration, which accounted for almost HUF 300 million.

The project has received plenty of state money in addition to operating grants. Sándor Lezsák has prepared a table for us showing the gross prices of investments. The table also includes the prices of some planned projects that have not yet been discussed in the press.

The renovation of the Club Tisza Hotel, the Széchenyi House, the Tisza Restaurant and the Lakodalmas House between 2013 and 2017 cost nearly HUF 4 billion gross. The rest of the funding was received in 2019 and 2020.

If we look at the public procurement notice, we see that several companies were working on the projects in Lakitelek. One of these, FERROÉP Fővállállállalkozó és Szerelőipari Zrt. won an outstanding number of tenders.

They renovated the Kincsem Inn, built the Organizing Archive, the wellness facility of the Hotel Club Tisza, the yurt camp, the Nimród Leisure Park, the wine terrace, the riding stables, the open and closed thermal baths with the camping site. It was also revealed that the company is a consortium member of the Hungarikum Hotel, the largest project to date.

The majority owner of FERROÉP is Pál Nemesi, who is the government commissioner for economic development. In the 2019 municipal elections, he was a challenger to Mayor László Botka in Szeged, running as an independent with the support of Fidesz.

Judging by the surrounding empty land and Sándor Lezsák’s unstinting entrepreneurial spirit, anything can be built here if further state subsidies are available.