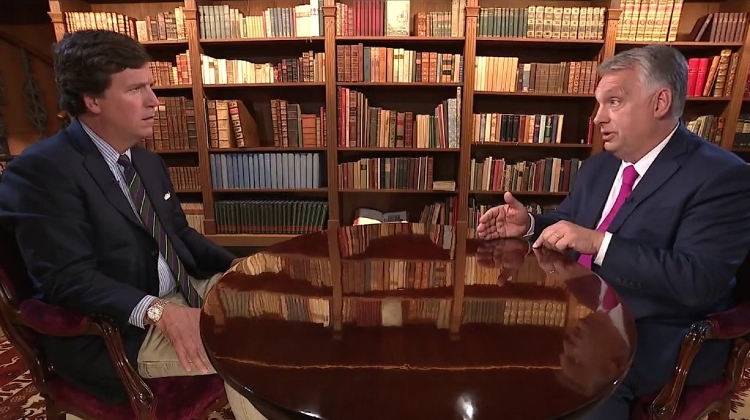 Hungary rejected illegal immigration during the migration crisis of 2015 because "it was the only reasonable behaviour" to defend the country and its citizens, Prime Minister Viktor Orbán said in an interview with conservative US channel Fox News.

In an interview with Fox News host Tucker Carlson, Orbán said Hungary had the right to make such decisions: “It’s coming from God, nature, all arguments are with us.

This is our country, this is our people, history, language, so we have to [protect them]”.

“Of course, if you are in trouble and Hungarians are the closest to you”, the state “has to be helpful”, but entering a country without permission is no basic human right, Orbán said. In rejecting migration, Hungary went against most EU countries which “decided to open a new chapter of their history,” Orbán said.

This “post-Christian and post-national” new regime is based on the co-existence of various communities, he said.

“There is no way to know whether the outcome of this will be good or bad, but I think it is very risky… Each nation has the right to take this risk or reject it. We Hungarians decided not to take that risk,” he said.

That decision was at the root of “harsh attacks” against Hungary, and “why my personal reputation is very bad … I’m treated like the black sheep of the European Union personally,” Orbán said.

In the interview aired by US channel FOX News Prime Minister Viktor Orbán called US President Joe Biden’s recent characterisation of him as a “totalitarian thug” a “personal insult to the Hungarian people” but added that “since he is the president of the United States, we have to be modest, respectful and … clarify that what he is doing is offensive.”

Bilateral ties between Hungary and the US are “basically very good”, especially in defence, economy and trade, Orbán said.

“So everything is fine, except politics when Liberals are in government in Washington.” Hungary sees thriving relations with the US as an asset even if the stance of the US has changed on Hungary, Orbán said.

A reason for the attacks is that Liberals take issue with the success of central European states, because it was achieved very differently from what western countries expected, Orbán said.

“We are building a very successful society … but its foundations are very different from what was wished by many western countries,” he said.

Western Liberals “cannot accept that inside Western civilisation there is a national-conservative alternative that is more successful in everyday life than the liberal worldview,” he said.

“The opponents came to power, which is a completely new circumstance for Hungary,” he said.

Commenting on the Hungarian general elections slated for next spring, Orbán said he was surprised to see the “international community accepting a coalition of communist political forces and anti-Semites running together in the elections.”

Regarding potential international interference into the Hungarian elections, Orbán said “we are not worried because we are prepared.

Of course, the international left wing will do everything to change the government in Hungary. We are prepared for that,” he said.