Watch: Here's What WHO Chief Was Just Doing in Budapest 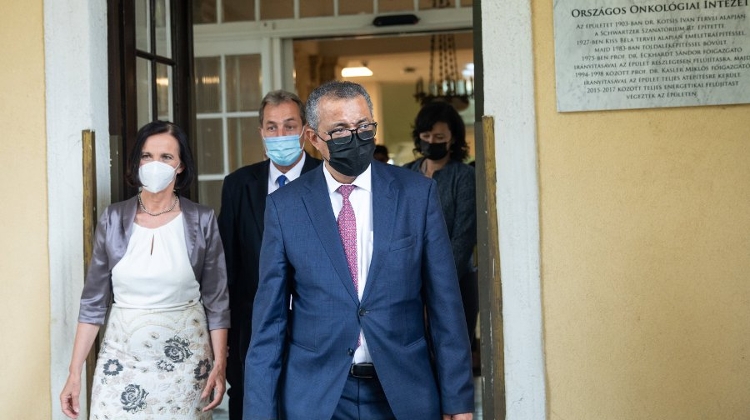 Tedros Adhanom Ghebreyesus, Director General of the World Health Organisation (WHO), paid a visit to the National Institute of Oncology (OOI) in Budapest on Monday.

Speaking to reporters after the visit, the WHO chief expressed his high regard for the institute’s work which he said could serve as an example for many countries.

He underlined that combatting cancer was one of the WHO’s top priorities and expressed appreciation for the OOI’s regional role in that endeavour.

The WHO chief expressed hope that his visit would serve as a first step in building cooperation with the Budapest institute in the long term.

Ildikó Horváth, the human resources ministry’s state secretary for health, who accompanied Tedros at the visit, told reporters that the OOI had played a leading role in Hungary’s adopting the WHO’s cancer treatment and management guidelines ever since the enactment of the country’s national cancer prevention programme in 1993.

She welcomed that the efforts and the work of the OOI and Hungarian oncologists have received international appreciation, noting their achievement in reducing the number of cancer-related deaths while maintaining a steady situation despite an increase, similarly to other countries, in the number of new cases of cancer in Hungary.

Szijjártó Meets WHO Chief In Budapest

Following the talks, Szijjártó said the coronavirus “simultaneously charges at the health, economic, and social fronts” and suggested that another lockdown and further restrictions could only be avoided if a large part of the yet unvaccinated got the jab.

He also warned that “those inciting against vaccination or certain vaccine types will deliver the country to the fourth wave of the epidemic”.

Szijjártó spoke highly of the WHO, which “withstood external pressures” and was working to save lives while “many international organisations used the pandemic as an excuse to launch a geopolitical-ideological war”.

He noted that the WHO had granted approval to worldwide use of the Chinese Sinopharm vaccine, while “Hungary’s leftist politicians are against some vaccines for political reasons”.

Hungary supports the WHO’s efforts, and has so far given away 1.5 million vaccine doses to other countries out of solidarity.

He added that the Hungarian government was ready to continue such assistance to other countries as long as it does not compromise Hungary’s vaccination programme.

The WHO chief thanked the Hungarian government for its vaccine donations, but warned that an unfair distribution of the vaccine contributed to further spread of the virus worldwide.

He said that while 4.8 billion shots had been so far administered across the world, 75% of that amount served only 10 countries.

The WHO is working to ensure that 40% of the world’s population is vaccinated by the end of this year, while that ratio should reach 70% by the middle of 2022, he added.

Meanwhile, the Hungarian government and the WHO adopted a memorandum of understanding on cooperation in combatting global humanitarian crises and facilitating medical assistance in them, the Prime Minister’s Office said in a statement.

Under the memorandum, the sides will also enhance cooperation in future in the areas of providing international humanitarian assistance and development projects.

The Hungarian government is committed to working towards resolving humanitarian crises and extending help to people affected by those crises, the statement said.

It underscored the government’s position that assistance must be provided to people in their home countries rather than supporting their migration.

In the statement, the Prime Minister’s Office noted assistance the government has so far provided under its Hungary Helps humanitarian aid programme including emergency aid, rehabilitation and education programmes facilitated in Africa’s Sub-Sahara region, and in developing countries in the Middle East and in South Asia.

“These programmes have allowed a quarter of a million people to choose to stay in their home country instead of deciding to leave,” the office said.