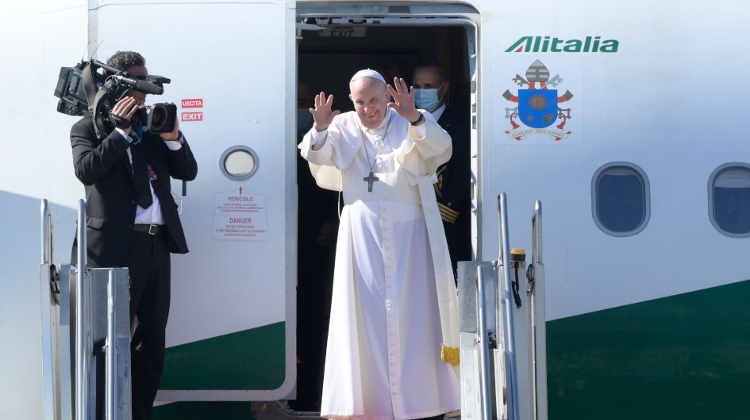 Pope Francis praised the “ecumenical spirit, family protection and ecological awareness” of Hungarians in an informal discussion with journalists on Wednesday evening.

The pontiff said aboard the flight from Slovakia to Vatican City that “complaints” about his one-day visit to Budapest, where he celebrated the closing mass of the 52nd Eucharistic Congress on Sunday, were based on a “misunderstanding”.

The visit to Slovakia had been organised earlier, which limited his time in Hungary, he said. The pope noted he had met Hungarian President János Áder for the third time on Sunday.

“I promised the president to look into another visit to Hungary next year or some other year,” he said.

Regarding the meeting with the president and Prime Minister Viktor Orbán, the pontiff said that the 40-minute meeting was “held in a friendly atmosphere,” and focused in part on environmental issues.

“While worries of a demographic winter are rising in Western Europe”, Francis said he had seen “many young couples and children” in Hungary and Slovakia.

Among other topics, Francis also touched on LGBTQ rights. He said governments had a duty to “aid same-sex couples living together and protect their rights”, but said “that has nothing to do with the sacrament of marriage”.

“We have to respect everyone, but please do not ask the church to deny its own truths,” he said.

During the talks, Francis was handed a letter from Edith Bruck, a Hungarian-born Holocaust survivor. In that context, the pope warned that anti-Semitism was on the rise. It “is making a resurgence, it is fashionable,” he said.