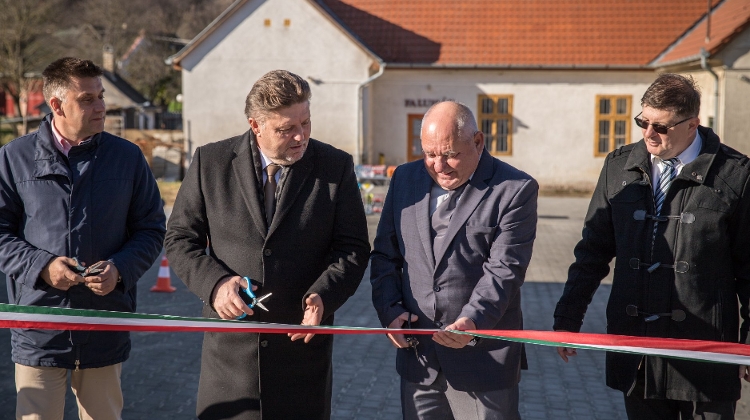 With the elections coming up in a few months, dedication fever is taking place among the country’s political elite. Back in November, we saw no less than ten politicians show up to dedicate a 6km-long bike path.

But another government politician is taking this to a new level, and showing that you can still dedicate a bike path that’s just… 0km.

On November 20, Fidesz MP Attila Gelencsér published photos on social media of a bicycle path and bus stop being dedicated in Kaposhomok, Somogy County. As he wrote:

The renovation of the 4.5 km-long road and the space in front of the church cost 60 million Ft. (US $184,000). The Kaposhomok cycle path will be used mainly by the young people of the settlement, more than 60 school children. All of these investments serve to give a better life to the people of Kaposvár and Zselic. Let’s go, Kaposhomok!

However, commenters on the post expressed puzzlement, as it was not clear what kind of bike route it was. Since that time, a journalist from Népszava also traveled to the locale, but was not able to find any bike paths there, nor any locals who knew anything about it.

They did say that there wasn’t much need for it, as there is hardly any car traffic in the village of 500 people and so it’s generally safe to ride a bike there.

In the end, Mayor István Barta admitted to the newspaper that no bike path had actually been built, but that most of the roads in the village had recently been paved and thus made suitable for cycling.

The mayor could not say why the region’s representative in Parliament had referred to the dedication of a bicycle path.