Inflation 7.4% in November in Hungary 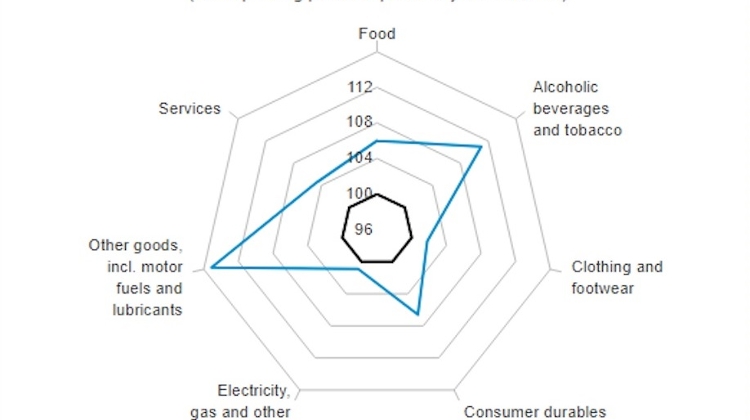 Consumer prices in Hungary grew by an annual 7.4% in November, after hitting 6.5% in October, the Central Statistical Office (KSH) said on Wednesday.

Prices in the category of goods that includes vehicle fuel increased by an annual 15.1%, as vehicle fuel prices jumped 37.7%, spirits and tobacco prices rose by 11%, lifted by a 16.8% increase in tobacco prices. Food prices grew by 6%, while household energy prices edged 0.9% higher.

Consumer durables increased by 6.6%, clothing prices by 1.8%, and services by 4.6%. Harmonised for better comparison with other European Union member states, CPI was 7.5%. Core inflation, which excludes volatile food and fuel prices, was 5.3%.

Month on month, inflation notched up 0.7%. Inflation is at the highest level in years and well beyond the Hungarian central bank’s 2-4% tolerance band.

Analysts told MTI said that inflation may have reached its peak in November, though the process of curbing it would take a long time.

ING Bank’s Péter Virovácz said higher prices were seen in 129 out of 140 product groups monitored by KSH, and he noted the “extremely rapid” rise in fuel prices and service charges as factors driving inflation.

With sustained supply-demand mismatches, the situation was likely to endure in the next few months, he added. It was “almost certain”, Virovácz said, that inflation would remain above 7% in December and “well above 6%” in the first quarter of 2022.

Gergely Suppan of Takarékbank said the central bank may need to speed up its cycle of rate hikes to combat secondary effects of higher commodity prices, a boom in demand amid the economy emerging from the pandemic, as well as a jump in wages due to the labour shortage.

Gábor Regős of Századvég Economic Research said that higher fuel prices accounted for over 2 percentage points of the current inflation figure, adding that putting a cap on fuels could somewhat slow down inflation in December.

External factors such as a shortage of commodities contributed to higher inflation, though internal causes such as high demand and a weak forint were also dominant factors.

Higher energy prices do not impact retail utility prices yet, but “the business sector is not yet protected” and this may drive up consumer prices in the end.