Pinball Museum In Budapest Re-opens With Empire Strikes Back Day 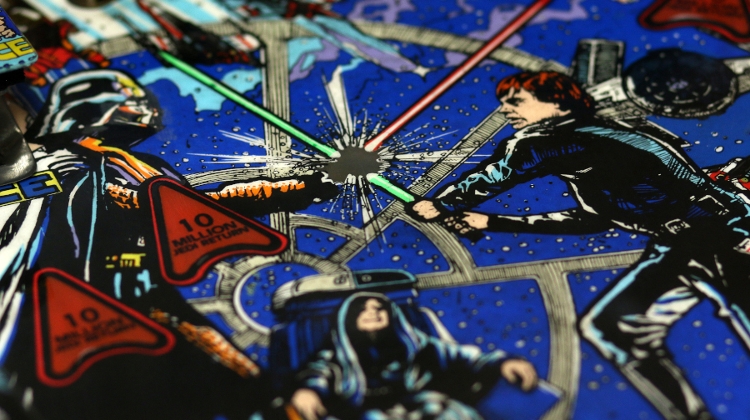 Star Wars movies have had an enormous impact on the development of arcade games in the last decades. And so it's not by chance that a life-size figure of Darth Maul is the first thing you see upon entering Budapest Pinball Museum.

The 21st of May 1980 was the day of the world premiere of The Empire Strikes Back, much awaited sequel of the first Star Wars episode. In remembrance of this, we announce a one-day promotion for this Friday, the 41st anniversary of the movie: anyone wearing a Star Wars costume may enter our premises and play our machines for free for the whole 21st of May (from 4pm to 11 pm)!

Those coming in ordinary clothing shall pay HUF 1980 (as the year of the premiere) for their entrance tickets (instead of HUF 3500 and 2500, respectively).

Fans can have a go on several machines inspired by the Star Wars Universe: for one, Data East's Star Wars pinball features R2D2, Mos Eisley cantine band and sound of TIE fighters, as well.

Additionally, our Arcade1Up cabinet features the original arcade versions of the classic games based on Star Wars, Star Wars: The Empire Strikes Back and Star Wars: Return of the Jedi.

Also, the aforementioned Darth Maul figure is a reference to the movie ''Phantom Menace" on the basis of which pinball manufacturer Williams has created Star Wars Episode I. machine (also part of our collection).

Yes, we do know that elsewhere the 4th of May is Star Wars Day, but from now on, here at the museum it is going to be the 21th of May!

Budapest Pinball Museum deploys some 160 machines (pinball, arcade video cabinets and other games), making the venue one of the biggest ongoing pinball collections in Europe. It is the most popular museum in Hungary, and currently the 11th out of some 600 Budapest tourist attractions on Tripadvisor.

The place was featured, among others, in The New York Times, Sydney Morning Herald, Frankfurter Allgemeine Zeitung, BBC, CNN, and some 100 other leading international media outlets.

The machines exhibited in the museum spans the entire history of the game from the 1800s to date.