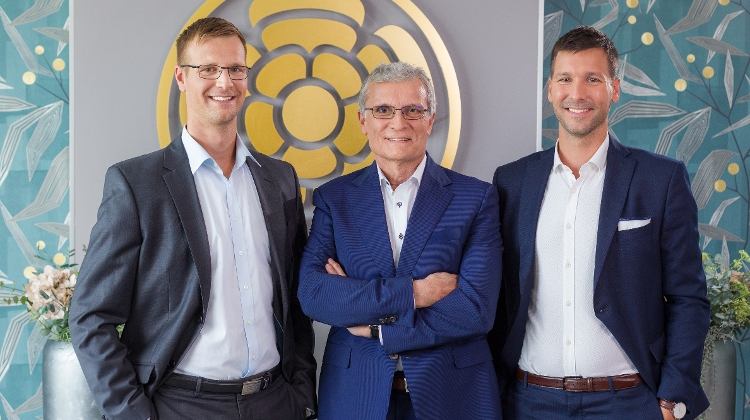 Many doctors have an inherited vocation within their families, but it is very much a rarity for some surgeries to be performed together by a father and his two sons.

We asked the Professor and his sons about family, sports, the profession, scientific research, and the future of orthopedics.

It is a nice family tradition to pass on a love of the medical profession. Was that also obvious in the case of your sons?

Prof. László Hangody: I ​​can’t speak for other professions, but I think that in the case of medical dynasties, workplace and professional problems usually crop up quite frequently in discussions at home. This was the case for myself and my father - he was a general surgeon, and I was always interested in locomotor surgery, but there were always overlaps around a common theme. Now, in the case of myself and my sons, their specialization is the same as mine, but we also have the changing times. I still belong to the generation that initially performed virtually complete locomotor surgery. The current generation is already moving in a specialized direction.

Fortunately, the area to which my activity narrowed - endoprosthetics, sports surgery, minimally invasive techniques and joint mirror surgeries - became my sons’ chosen areas, so we not only had, but will still have a common theme. The situation is even more special in that we work together in several workplaces and our areas of innovative research and development are similar.

My eldest son received a scientific qualification related to the articular cartilage surface, and the middle one from background research related to patellar tendon surgery. The family infection reached my third son, András, in such a form that after graduating in tourism and hospitality, he is now undergoing training as an operating room assistant.

Why did you choose orthopedics?

Prof. László Hangody: My father graduated from university between 1945-51. This was the period after which specialization within surgery began. He worked as a general surgeon, but also performed musculoskeletal surgery, gynecology, and urology. By the time I started working, locomotor surgery was already a separate field.

Based on the Austrian-Swiss-German model, separate accident surgery and separate orthopedics developed in Hungary. In my workplace, however, from the beginning, both areas were present - I was given a general approach to locomotor surgery and I also had a desire to deal with body cavity injuries and abdominal-chest surgical tasks.

It was also lucky that arthroscopic surgery started at the beginning of my career, and I had perhaps a little more talent than average for this, and which then - within locomotor surgery - became a big trend, accounting for a third of the work. My sons were already born into this.

Dr. László Hangody: It was sympathetic in orthopedics that it was wide-ranging. A wide variety of patients - young, elderly, men, women - and various ailments can be cured, and a large percentage of orthopedic patients can be cured too. At first, I even considered gynecology and urology, but eventually orthopedics remained, and I’m glad it turned out that way.

Dr. György Hangody: Medical University was almost certain after high school, and by then I was also certain that I wanted a manual profession, and I actually committed to orthopedics in the 4th and 5th years of university. I consider myself very lucky because I love what I do, and the opportunity for development motivates me.

Professor, loyal to your workplaces from the beginning, is this kind of stability important?

Prof. László Hangody: I ​​was able to work in the same place from the beginning of my career. During my medical years I worked in several places as a surgical assistant, so I even got in touch with Uzsoki Hospital while still a student. Afterwards, I was so lucky to be able to work there. Just as I did not leave the country or the profession, nor did I leave my workplace.

In addition, my work encompassed significant foreign consulting and surgical activities in the private sector, of which Dr. Rose Private Hospital is the most stable private clinical environment, providing the widest possible professional repertoire. I think that here, just like in my main job, over the years a very stable, good professional community and a very good team has developed.

The size of Dr. Rose Private Hospital makes it suitable for serious professional work, and on the part of investors, it has always been emphasized that the appropriate infrastructural background is available. It is possible to progress from here, so much so that significant research and innovation is already taking place, which can also be a source of cohesive strength and a sense of success.

Professor, how do you see the future of orthopedics?

Prof. László Hangody: In the research/scientific line, and in patient care, I think that one of the main trends is the minimally invasive direction of care. When I started working, it was routine that if someone had a knee cartilage ring injury, which is one of the most common forms of injury, then we cut up the patient’s knee and the surgery was followed by six months’ recovery.

As arthroscopic surgery became widespread in the second half of the 1980s, the practice developed within ten years that, apart from endoprosthetic surgeries, we practically no longer opened the knee joint as we could do everything else arthroscopically. At the time, we said that we had practically reached the peak of the performance of minimally invasive endeavors for the knee joint because prosthetics would never be able to be performed with a minimally invasive technique.

Then came the turn of the millennium, and minimally invasive endeavors also appeared in endoprosthetics. And even if we don’t insert the prostheses through a keyhole, we do the surgeries in a way that causes the least discomfort possible. So, one of the main trends is to increase the number of minimally invasive interventions.

The other is that the problems, the degenerative diseases that have caught us out so far and for which we have only been able to offer compromise solutions up to now, can be operated on with some kind of biological augmentation support. So, we perform surgeries not only with a knife or an arthroscope, but we also try to call on biology for help, and this cartilage surface damage is starting to materialize in patient care as well.

Here, we also use a degradable regenerative scaffold to replace a cartilage surface, as a result of which a completely destroyed cartilage surface will be replaceable with new living cartilage. Thanks to this, in some cases endoprosthetic interventions may not even be necessary in the distant future.

So, the innovation and research fronts are starting to turn absolutely in the direction of a biological approach. In summary, I believe that today’s advanced endoprosthetic options provide an excellent solution to severe hip, knee, shoulder, and ankle joint abrasion and degeneration, but today’s modern locomotor surgery can already offer promising biological solutions to timely-observed large joint wear and injured cartilage surface damage.

Dr. László Hangody: Working together is - as my brother said - like fruit on a tree that has slowly ripened over the years and can now really be harvested. It’s a great happiness, not to mention the security that envelops both professionally and emotionally when you work with your own family members within an operating room and know each other’s vibrations exactly.

Naturally, this is also the case with other colleagues with whom we work a lot, but it is still a very special and lucky situation. It’s a good feeling when, here at Dr. Rose Private Hospital, the three of us perform eight surgeries assisting one another. This is a special experience, because the professional-emotional harmony means we can also provide our patients with a plus that would be more difficult to create without such familial-professional harmony.

Dr. György Hangody: It must be a huge source of pride for a father, in my opinion, that we can operate as three Hangodys. I think this is a curiosity. A couple of weeks ago, on a day of surgery, we had eight surgeries, four for our father, two for Laci, and two for me. We operated in a different line-up for each surgery, which is definitely a rarity.

The fantastic thing about this for us is that we’re palletizing by the operating table, and I really don’t want to be immodest, but besides talent it matters a great deal who one studies alongside. Seeing this harmony, our brother, who earned a master’s degree in tourism hospitality, joined us and started training as a surgical first assistant after graduating. We hope that he will also work with us in the long term.

Prof. László Hangody: I ​​think the best thing that can happen to a person is to work with their own children. It is a great joy to be able to pass on one’s knowledge to those you love most. And it’s a magnificent experience, because I see the genetic patterns that I believe I discover in myself. I have already had a look back at my own journey, I know when it went in the right direction, what my difficulties were, and I can also measure my success. I see in my children that they have talent for certain things, for which I help their development. I think that in this sense, our joint work and joint discussions work very well.

They accept and sample for themselves what I have achieved - obviously they don’t want to restrict themselves to this level as they want to go even further - but they see my professional work and can judge what I did well and what they would want to do differently.