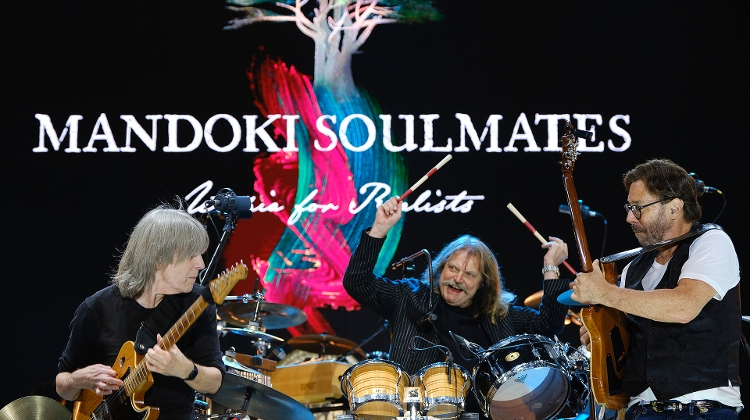 Hang with the band for their global Zoom meet-up, then watch the premiere of a magnificent new concert film from the Soulmates for free.

From the band: To thank our dedicated followers in the prog-rock and jazz-rock communities for their support in these days of cancelled concerts and shuttered venues, we MANDOKI SOULMATES are reaching out with a live global streaming event on January 15, 2022 (3pm NYC time; 21:00 Berlin time).

Our music-loving supporters have continued to inspire our creativity through these uncertain times for musicians and for the world, and we want to express our gratitude by hosting this event with band members in a live Zoom hang-out, followed by streaming a never-before-seen sumptuous concert film from our electrifying open-air Budapest performance in August 2021. Join us for the Zoom meet-up and video premiere on YouTube (times noted above).

During the band meet-up, we’ll update everyone on what we’ve been doing musically and personally in these trying times, and preview exciting new and upcoming releases from band members, such as the new Jethro Tull album from Ian Anderson. In the first days of real pandemic lockdown in 2020, Ian, Leslie, and members of the SOULMATES created a song for charity celebrating front-line workers, “We Say, Thank You”.

In the upcoming streaming event, the two-and-a-half hour concert video premiere includes the brilliant prog-rock suite “Hungarian Pictures,” and while the concert was attended by 30,000 people, this high-end concert film brings you into the music and performances in ways that are only possible in this audio-visual medium. You won’t want to miss it - it’s free and not available anywhere else—our way of saying a special thank you to our amazing audience.

The MANDOKI SOULMATES, once described by the late Soulmate Greg Lake (Emerson, Lake & Palmer) as “one of the best bands in the world,” are the “Super-Group” musicians surrounding singer, drummer, and songwriter Leslie Mandoki, who has worked as a producer for Disney masterpieces and with greats like Lionel Ritchie, Phil Collins, and Chaka Khan, among many others.

Playing together in the MANDOKI SOULMATES band, these luminaries have been writing and producing new original music for 30 years. Founding band members include Ian Anderson of Jethro Tull, Jack Bruce of Cream, and Al Di Meola; collectively they have earned 35 Grammys and sold over 350 million records.

The band’s latest album, “Utopia For Realists,” defines itself as sophisticated and mature new music that combines the intellectual and artistic essence of British prog rock with the virtuosic brilliance of New York's jazz-rock and fusion scene.

But let's hear what some American music journalists are saying:

The instrumentation is bold and surreal with strong implications of European and perhaps Arabic musical flair. ‘Return to Budapest’ is a 15:27 breathtaking and uplifting song that travels in many musical genre directions.

The song's beginnings feature legendary voices: Ian Anderson (Jethro Tull) and David Clayton-Thomas (Blood, Sweat & Tears). Although the instrumentation is intricate, the message is straightforward... ‘LET THE MUSIC SHOW YOU THE WAY!’ The tracks ‘Return to Budapest’ and ‘The Torch’ could easily be Top 40 hits! ‘The Torch,’ also released as a single, is a beautiful composition about placing our hopes for the future on our young ...  ‘be brave, be strong, be hungry - pass on THE TORCH!’

… all are gorgeous songs written with perfection…
Five Stars for Utopia for Realists by The Mandoki Soulmates...
A brilliantly orchestrated musical performance with a perception of perseverance, tenacity and a greater good for all mankind.”

Nick Tate: “He’s one of the most accomplished artists you’ve probably never heard of, he’s collaborated with everybody who’s anybody in British prog circles, American jazz-fusion legends, and even world-beat luminaries. Cream’s Jack Bruce compared him to Duke Ellington. Al Di Meola calls him the ‘Hungarian Quincy Jones.’ Greg Lake deemed his band ‘probably the best in the world.’ Ian Anderson says he’s the ‘master chef in the kitchen, mixing all of these exotic spices and mystical musical influences.’

Leslie Mandoki has worked with a ‘Who's Who’ of British prog and American jazz-fusion legends. If you’ve ever wondered what it might sound like with Al Di Meola guesting with Yes, Ian Anderson fronting Return to Forever, or King Crimson scoring Igor Stravinsky for rock orchestra, Mandoki Soulmates music just might be your cup of prog tea.”

“Leslie Mandoki is a perfect example of what is possible in life! He is doing what he was born to do, and loving every minute of it. We could all use a little bit more of that in this world. Check out the Mandoki Soulmates, and Utopia for Realists, you'll be glad you did!”