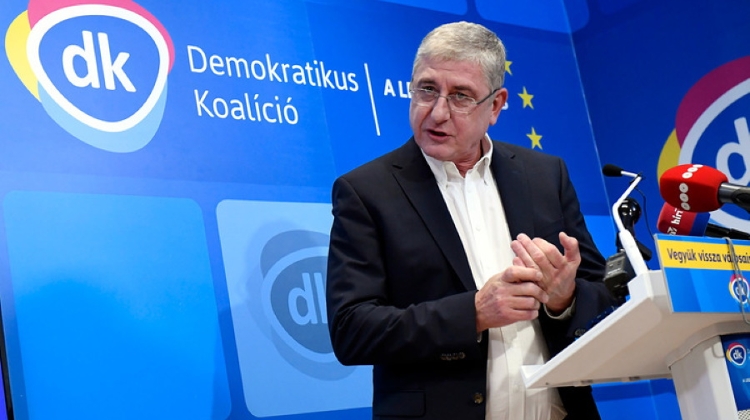 Hungary’s opposition parties are prepared to govern and Péter Marki-Zay is prepared to serve as prime minister, Ferenc Gyurcsány, head of the leftist Democratic Coalition (DK), said in a keynote speech on Friday evening.

Gyurcsány said that while the opposition parties had been rivals before, they had joined forces and their leaders were “consulting with each other every other day” because they all wanted a “European, democratic and civil Hungary”.

“This opposition is fated to challenge the regime of [Prime Minister] Viktor Orbán,” Gyurcsány said. “The government’s fate in the elections will be decided based on whether or not the people want the prime minister and his world of power and culture to remain in place.”

Gyurcsány said that if the opposition won the election on April 3, it will vote in parliament for Márki-Zay, the opposition’s joint prime ministerial candidate, to be appointed to head the new government. “That’s how it should be because that was what the opposition voters decided,” he said.

Supporting a prime ministerial candidate means supporting a set of shared political ideas, Gyurcsány said, adding that those ideas were “significantly more important” than any other detail because “it is about our homeland”.

Gyurcsány said he believed it was natural that many people were “fed up” with the government after it had been in power for 12 years. “An average marriage in Hungary lasts 14 years, so after 12 years why wouldn’t a large part of the country be fed up with a government that it never wanted even for a minute?” he said.

Gyurcsány said the government was “tired” and “dissolute”, lacking in fresh ideas and incapable of observing its own rules and principles. He said the “world of Orbán” was “not actually brave, merely very vocal”.

“The Orbán government isn’t strong, but harsh, and isn’t Christian,” Gyurcsány said. “It must be made clear that we’re dealing with pagan barbarians here who try to wrap themselves in the holy causes of Christianity to try to make people forget all the nasty things they do.”

Gyurcsány said the biggest difference between the government and the opposition was in their approach where they saw Hungary’s place in the world. “Is our point of reference Moscow and Ankara or Berlin and Paris?”

Other key questions, he said, were whether power should be held by the people or the government and whether the state and the current government were “thieves”.

Europe’s main political wings and the Hungarian opposition agree on these issues, he said. “And the idea that people shouldn’t be living in a Hungary that’s been left behind alongside a small wealthy class is a left-wing one,” he added.

Gyurcsány said the opposition needed to give people the chance to “dare to be free” and to see freedom not as a threat but as an opportunity. The opposition wants the “fair regulation and restrictions of freedom” to lead to a fair distribution of opportunities for the people, he said.

Outlining his vision of a possible future after the April 3 general election, Gyurcsány said the government and the opposition each had around 2.5 million supporters. “We have to learn to coexist because we have no other choice,” he said.

Ruling Fidesz reacted by calling on Gyurcsány to apologise for scrapping the 13th month pension, the 13th month public employee salary and home creation subsidies when he was in power.

Gyurcsány should also apologise to employers and entrepreneurs “for the continuous tax increases” under his premiership, to workers for the record unemployment, for the hospital closures and for having pushed local councils into debt, Máté Kocsis, Fidesz’s parliamentary group leader, said in a video message.