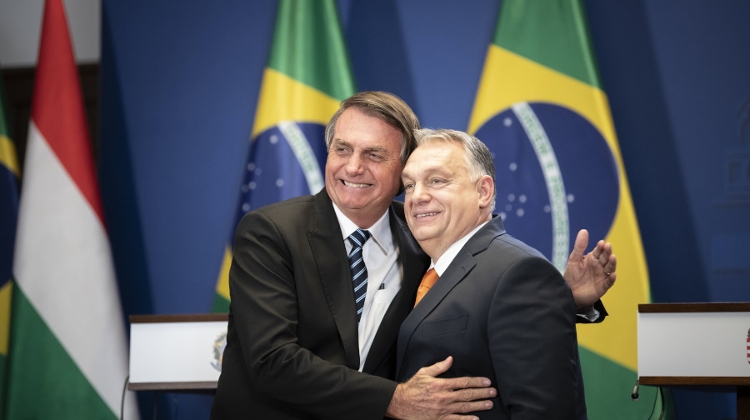 Prime Minister Viktor Orbán said Hungary and Brazil had agreed to set up a joint “early warning system” to alert one another should any migration-related recommendations which go against their interests be drafted.

The warning system will allow the two countries to cooperate on preventing the adoption of such documents, Orbán said after talks with Brazilian President Jair Bolsonaro.

Hungary and Brazil consider it “absurd” that Christianity is the most persecuted religion in the world today “and that the civilisation born out of Christian roots, primarily European civilisation, does very little” to protect those being persecuted for their faith, Orbán said.

He added that Hungary and Brazil had signed an agreement to jointly help persecuted Christian communities in Africa. Meanwhile, Orbán said the two countries also saw eye to eye on “the attacks against families which want to force a concept of family onto the world that varies with what we believe a family is”.

Hungary’s constitution makes it clear that the father is a man and the mother a woman, he said, adding that a family consists of a man and a woman “and we will do everything we can to prevent the relativisation of this approach”.

Turning to trade relations, Orbán said free trade was vital for Hungary, as exports accounted for 80-90% of the country’s gross domestic product. In other words, “Hungarians would be significantly worse off without the existence of free trade in the world”, he said. Orbán said he and Bolsonaro had agreed that Brazil was open to welcoming Hungarian investments.

As regards military cooperation, the prime minister noted that Brazil is a contributor to Hungary’s military development scheme, noting that Hungary has already purchased two military transport aircraft from Brazil. The two countries have also agreed to expand military industrial cooperation, he added.

Orbán noted there are 504 Brazilian university students studying in Hungary, 250 of whom are studying on scholarships provided by the Hungarian state.

On another subject, Orbán noted that Bolsonaro arrived in Hungary after a visit to Moscow. Given that diplomacy and everyday life today “are overshadowed by the possibility of war”, all diplomatic efforts aimed at avoiding war “are extremely valuable to the entire world, but especially Hungary, since we are in close proximity to this conflict”, he said.

Orbán noted that Brazil was one of the European Union’s nine strategic partner countries and a partner of NATO. He thanked Bolsonaro for his efforts in recent days “to uphold peace in this part of Europe”.

He called the Brazilian president’s visit a historic event and a “special honour”, adding that prior to the talks, Hungary had expressed its sympathies to the Brazilian people over the recent natural disaster there.
Bolsonaro said his visit offered a good opportunity for the two countries to deepen their relations, including economic ties.

Bolsonaro called Hungary Brazil’s “little big brother”, referring to territorial differences on the one hand, and Orbán’s achievements in representing their shared priorities, including respect for God, homeland, family and freedom, on the other.

Bolsonaro said his “useful” talks in Budapest also covered the Russian-Ukrainian conflict. He said no one had an interest in war, which, if it broke out, would harm all involved. The president noted that about 100,000 people of Hungarian descent are living in Brazil, and many Brazilian students are studying in Hungary.

Regarding his talks with Hungarian President János Áder, Bolsonaro said Brazil was often portrayed as a destroyer of the Amazonian rainforest. In reality, however, wildlife was protected on 63% of rainforests, and massive afforestation projects were under way, he said, adding that the attacks against Brazil had been launched by agri-business circles.

Before the press conference, the two sides signed agreements on cooperation in defence, humanitarian undertakings and water management.