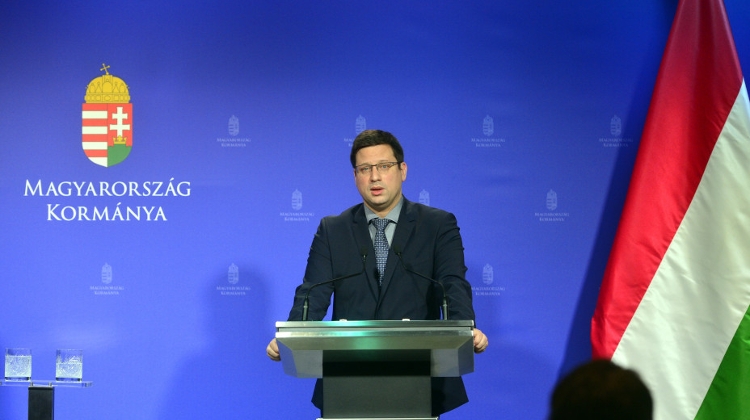 The state is ready to intervene and exercise its right to designate new operators for petrol stations that face closure in areas where, as a result, fuel would become unavailable within a 5 km radius of a settlement, the prime minister’s chief of staff told a regular press briefing on Wednesday.

Commenting on press reports that some petrol station operators are facing bankruptcy due to government imposed fuel price caps, Gergely Gulyás said Hungarian oil and gas company MOL was ready to step in to provide services instead.

The government so far knows of no settlement in the country where it is not possible to buy fuel within 5 km, he said, but it was possible there may be 3-4 such locations.

Under the government decree on the fuel price caps, petrol stations do not have a right to limit the amount of fuel motorists can put in their cars, Gulyás said, adding that tax authority NAV will monitor their compliance with the decree.

Stations can only limit the amount of fuel people buy for later use to 10 litres, he added. Gulyás said that while inflation was rising across the globe, consumer price growth in Hungary had slowed by 3 percentage points thanks to the price caps and the mortgage freeze introduced by the government.

He said he trusted the central bank’s forecast which sees inflation falling to between 2-4 % by the fourth quarter. Meanwhile, Gulyás said Hungary’s 2021 economic growth rate of 7.1% was the most rapid since the country’s change of regime in 1990.

The record growth rate is not just a result of Hungary’s effective drawdown of European Union funds, but also the government’s economic policies that have yielded record investments, continuous wage growth and rising consumption, he said. The 7.1% growth rate is the second highest in the EU behind that of Poland, whose economy last year grew by 7.7%, Gulyás added.

On another subject, Gulyás said the European Commission had rejected Hungary’s reconstruction plan “because of the child protection law”, suggesting that the legislation curbed the rule of law.

“The Hungarian government is concerned that the rule of law should be used as punishment for Hungary” over the contested law, he said. “The rule of law is a tool for the Left to sanction different political positions,” he said.

Concerning teachers’ demands of higher pay, Gulyás said that the government was in talks with their unions. The government “sees the demands and considers them legitimate”, he said, adding that “a rise of at least 30% has been announced”.

Referring to another strike called by the unions for the second half of March, however, he said “it is like interfering with the (April 3) elections”.

“You can do that but it should be considered as a political action,” Gulyás said. He also referred to the unions’ suggestion that a recent government decree concerning school services during strike actions was contrary to the strike law, Gulyás said that “the unions went ahead with a strike action deemed unlawful by a court, while the same ruling stipulates that the government should define mandatory services in a decree”.

Responding to another question, if the government’s utility price cut programme costs “between 500 and 2,000 billion forints” this year, Gulyás said “the extra cost will be closer to the lower half of the band”, adding that state energy company MVM’s revenues were sufficient “to manage the situation”.

Concerning a question about recent remarks by Péter Márki-Zay, prime ministerial candidate of the united opposition, that he, if the opposition won the upcoming election, would “represent communists and fascists, too”, Gulyás said “nobody has set that goal since 1944” and insisted that nobody would have represented communists “for over 30 decades”.

Asked about the Russia-Ukraine conflict and Hungary’s possible participation, Gulyás said the incumbent government would “not send Hungarian soldiers to fight in Ukraine”.

He added that the interior and defence ministries were in the process of making a detailed plan in preparation for a possible wave of refugees. A large part of them could be heading for Poland, while both ethnic Hungarians and Ukrainians in Transcarpathia could choose to come to Hungary, he said, adding that Hungary could accommodate “tens of thousands if necessary”.

He noted that under Hungary’s refugee rules “the first safe country” is supposed to provide shelter, and said “in Ukraine’s case this is Hungary”.

Replying to a question concerning a possible visit to Hungary by former US president Donald Trump before April 3, Gulyás said he had no information of that kind, adding that “the government is not organising such a visit”.