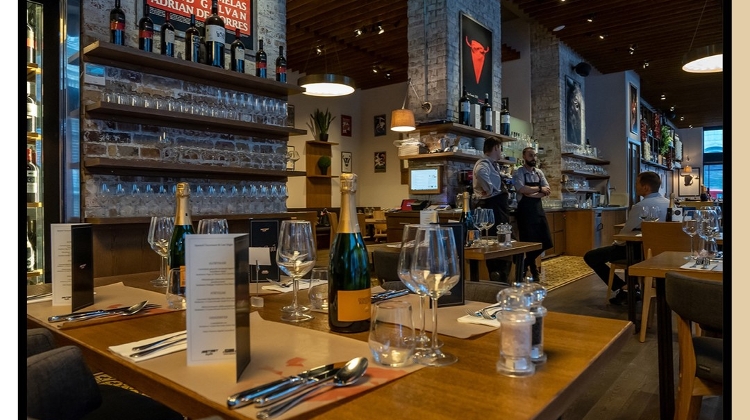 If you are looking for Spanish food in Hungary, you will surely come across Pata Negra. The brand covers more than only the two excellent tapas bars in Pest and Buda. Vilmos Losits and Szilveszter Mókusz opened another high-class grill restaurant, El Asador de Pata Negra, bringing the smoky flavours of Spain to the Hungarian capital.

We checked out what makes the restaurant such a special place.

On the border of the Jewish District, just behind the Ballet Institute, El Asador de Pata Negra is one of the places that is just as busy on weekdays as on weekends. The glass doors with the emblematic bull figure lead to a restaurant that blends in traditional Spanish elements with its contemporary minimalist interior design.

Posters of toreros decorate the rustic brick walls over the modern tables, and hams hang from the ceiling over the wine shelves. While wooden tones are generally dominant, the floor tiles are decorated by chic patterns in the colours of Spain. However, the restaurant’s central piece is the gigantic charcoal oven in the open grill kitchen.

The oven comes from Mibrasa, one of the leading charcoal oven manufacturers, and was delivered right from Barcelona. The sophisticated fireplace is not only optically dominant in the restaurant’s atmosphere.

The noise of the opening and closing hatches, the shimmering of the wooden coals, the flying sparks and the smell of smoke and meat all combine into a complex sensory experience.

The “embers” of Asador, as the Spanish refer to these kinds of charcoal grills, never go cold – or almost never. “We only let the fire die down once a year, over the Christmas holidays,” the owner, Szilveszter Mókusz, explains. “On the 27th it’s fired up again and it keeps burning for another whole year.”

The grill oven plays a central role from a culinary point of view too – almost everything is prepared, or at least refined, in it, ranging from meat and fish dishes, garnish and vegetables, and even including desserts.

As Mókusz sees it, this is not only a cooking process: “Smoke is a spice and it’s equally important to use it in the right amount, as in the case of salt, for example. Too much will over-dominate the taste of the dish.”

He and his business partner, Vilmos Losits, discovered their affection for the Spanish cuisine as early as in the beginning of the 1990s. It was around then that Mókusz, a young student, moved to the Spanish harbour, Valencia: “I have been craving for Spanish food ever since,” he says.

Mókusz shared his craving with his friend from school, Vilmos Losits. They began considering the idea of bringing Spanish cuisine into their Hungarian home country, however the limitations on imports back then made it impossible to bring the authentic ingredients, wines and other necessary accessories to the country of the former Eastern bloc.

“The extension of the European Union in 2004 brought about the necessary changes, which made all of it possible,” Mókusz told us. “Hungary entered the union on 1 May and on 4 May we were already in Spain, looking for suppliers.”

He and Losits opened their first tapas bar, the original Pata Negra at Kálvin tér, in September already. Thanks to its great success, the opening of a second branch followed in November 2009 – this time in Buda.

The two restaurateurs were already considering back in 2009 that in addition to a tapas bar they should also open a modern Spanish grill restaurant. However, El Asador de Pata Negra finally opened its doors only in February 2017.

Unlike in the Pata Negras on both sides of the Danube, this place is not about having a few small fine bites in a cosy atmosphere, all while everyone’s elbows are rubbing together.

The El Asador promises full courses and all-evening entertainment, and the place is spacious – they also organise weddings with up to 80 guests on almost 300 square metres. The offer from the kitchen is also broader: many Spanish delicacies fill up the menu.

The steaks of the house contain a special surprise. The meat is coming from “an old fat cow,” as Mókusz explains. Although “old” and “cow” are not necessarily the first associations many of us would be making when thinking about a juicy steak, according to the restaurant owners and connoisseurs of the Spanish cuisine this is a typical Basque speciality.

And who said that old milk cows are not able to provide good meat for a juicy steak? On the contrary. Age means ripening, it allows enough time for the fat tissue to build, so that the typical marble patterns which are known as the trademark of a good steak may form.

In short: meat improves its taste and character with time. And this can be noticed. Only a little bit of sea salt may be added to the pieces of meat once they are prepared in the charcoal oven, at high temperature in a short time.

On the other hand, when talking about lamb chops or whole chickens, they are using surprisingly young animals. “Our lambs have been eating nothing but mother’s milk all their life,” Mókusz explains.

The pork neck from Iberia is a hot tip for anyone who likes their food juicy. In addition, El Asador offers a wide selection of seafood: one of the guests’ favourites is the salmon, grilled over a separate small oak board within the grill oven. Even the Saint Jacob’s mussels, which are offered as appetisers, reach their special taste in the charcoal oven.

You will see peculiar specialities even on the restaurant’s drink card. It’s obvious right away that you won’t find the usual brands of mineral water here. El Asador offers its self-bottled water instead, in sparkling and still versions. However, this is not simple tap water.

The water is filtered using the most contemporary technology from the BWT company, and magnesium is added so that unpleasant smells and tastes are neutralised and chlorine remains are minimised. The water tastes softer.  Mókusz and Losits swear by the product’s high quality and use the processed water for preparing their coffees as well.

Mókusz explains enthusiastically: “We are following a trend that introduces more sustainable solutions in gastronomy. We don’t use any plastic bottles for our self-bottled water, this way less waste is produced, we are saving on emissions and of course on transportation as well.”

The restaurant charges the same price for the self-produced mineral water as they would for traditional products. However, HUF 30 from the price of each bottle is donated to a Hungarian charity organisation helping children.

Moreover, the drink menu of El Asador is also distinguished by the exclusive wine selection, where 18 of the 78 protected Spanish wine regions are represented: as both of the restaurant owners assure us, “80 percent of our wines cannot be found anywhere else in Hungary.” They only offer Spanish wines, of course.

Mókusz and Losits travel to Spain on a regular basis, always searching for new, exciting wines, visiting promising wineries in many different regions, and they bring back only products that are 100 percent satisfactory even for their refined tastes.

Mókusz shows us some of his current favourites, including a wonderfully palatable white wine made of Albariño grapes, produced by the small cultivation cooperative Paco & Lola.

The rosé cava from the Bohigas winery is also ranking highly for the restaurant owners at the moment.

The offer is complemented by further soft drinks and beers, again all from Spain.

If you would like to relive the nice moments from your last summer vacation or are longing for a culinary salute from sunny Spain in the middle of the cold season, you will be at the right place at El Asador de Pata Negra.

Visiting the restaurant with the Mibrasa oven, which is unique in this region, is also a must for grilled meat fans. The spacious rooms, which allow the placement of longer tables, make El Asador also an ideal place to visit for dinners in larger groups.