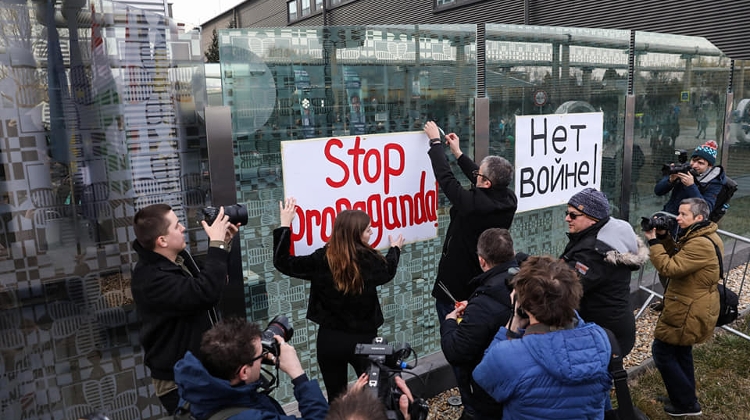 “It’s a miracle that after 12 years of brainwashing, we have a chance to defeat Fidesz,” said Péter Márki-Zay, the opposition coalition’s candidate for prime minister, at a demonstration on Sunday evening in front of the headquarters of state broadcaster MTVA.

Entitled “Propaganda is a weapon, lies kill,” the event was attended by several hundred people who protested what they claim is pro-Russian bias in Hungary’s taxpayer-funded public media. Speakers representing different elements of the United for Hungary opposition coalition demanded that Hungarian media be fairer and stop representing Russia’s interests.

MTVA itself filmed the event from the top of one of its buildings. Addressing these employees, independent MP Ákos Hadházy called for the end of Russian propaganda in “public media,” and to feature opposition politicians on their programs.

Another independent MP, Bernadett Szél, commented that while Fidesz had demanded a non-partisan public media for 30 years, the party had now “made a monster” out of MTVA with a director who falsifies the news.

Among other things, Tímea Szabó from Dialogue said that Gergely Karácsony had only been invited to MTVA once since becoming mayor of Budapest. Even then, they asked him if he had come by bicycle.

DK’s László Varju said those who had set up cameras on the roof of the MTVA building were traitors, and called their programs “cannons” that are “shot into people’s homes.”

Máté Kanász-Nagy from LMP claimed that the spirit of the Kremlin pervaded the MTVA building, while Miklós Hajnal from Momentum recalled posters from 30 years ago that commemorated the end of Russian occupation of Hungary by making the crowd chant “товарищи конец” (“It’s over, comrades!”).

Socialist MEP István Ujhelyi stated that Putinism and the spirit of Göbbels did not just move into the building in the past few weeks, but has been there for a decade.

As the final speaker, Péter Márki-Zay demanded that Viktor Orbán debate him in a live broadcast format. Upon hearing this, the crowd began to chant “Coward!” in reference to the Prime Minister.