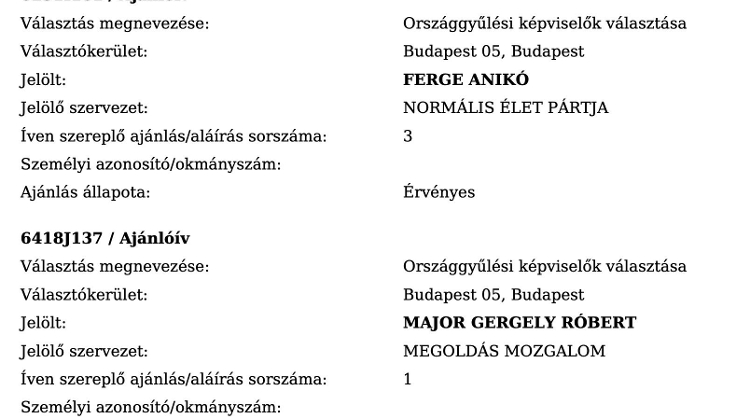 In February, the collection of recommendations for the April parliamentary elections took place in 106 constituencies of Hungary. At least 500 valid signatures from voters living in the constituency were required. However, according to our information, not everyone managed to get them in the correct way.

We spoke to several people who found that their personal details had been put on the recommendation forms without their knowledge, mostly in favour of candidates from the Normal Life Party (NÉP), which is linked to the virus-sceptic pharmacist Görgy Gődény.

We have also contacted the National Election Office and the police to ask them about the situation.

Seven candidates have been registered in the Miskolc-based constituency Borsod-Abaúj-Zemplén 1, among them is Zoltánné Loukota, the candidate of György Gődény’s party, who was registered by the electoral commission on 26 February, but according to our information, some of the recommendations collected may have been put on the paper without the knowledge of the voters.

Enikő Bánóczi told Atlatszo that she also found her name among the people who recommended Zoltánné Loukota – but since she doesn’t agree with the party and their aims, she belives her signatures has been forged.

“What upsets me is that I’ve been working with people’s data for 27 years, and it would never occur to me to misuse anyone’s data. It also had an ID number on it – mine – that was obtained from somewhere.”

Among her family members and friends, there are many others to whom a similar thing has happened, seven people in total.

György Gődény became known for his virussceptical posts in the context of the coronavirus pandemic. He has a Facebook group with tens of thousands of members, spreading a variety of conspirary theories and fake news.

Last February he organised a protest against the restrictions, for which he was fined a million HUF. Gődény’s name has already surfaced in the 2018 elections, when he was the list leader of the Közös Nevező 2018 party, which many consider to be a fake party – a political party that were only created to cash in on the state support given to candidates – and was closely linked to the couple of Mária Seres and Ottó Stekler, who, according to press reports, were also indicted by the prosecution for having swindled 117 million forints in state subsidies in the 2014 parliamentary elections.

The Seres-Stekler couple also got a place on the current list of NÉP, with Mária Seres in third place and her husband in seventh. One of the party’s founders, Bulcsú Bánk Harkai, is 11th on the national list.

He was also the founder of the aforementioned Közös Nevező 2018 party, which received €153 million in campaign funding four years ago which was not repaid, so it is being prosecuted on suspicion of budget fraud.

Bence Gallai also checked his recommendations online, and was shocked to see that a recommendation was made in his name, for the candidate of the Normal Life Party, Piroska Billein.”

Piroska Billein was registered by the National Election Committee on 28 February and will be eligible to vote in Budapest constituency 2 (which includes the 11th district and a small part of the 12th district).

According to Bence Gallai, he has never signed anything for the party or the candidate before, so he does not know how he got on the recommendation sheet. He reported the case to the police, and told us that according to the authorities, “it is not an isolated case at all, many people have filed complaints, and this is the one party that it is typical during this election period.”

He wrote a letter to the district electoral office the same day and received a reply that a procedure was under way regarding the registration of the two candidates concerned, and that the notification had been forwarded to the Budapest Electoral Committee.

According to the police, dozens of prosecutions have been launched so far

We contacted the party’s list leader, Dr. György Gődény,  but we had not received a reply to our questions by the time our article was published. However, Gődény told Telex earlier that as long as the signers do not have to prove their identity, no one can check whether they are actually putting their own data on the form.

We have also written to the National Election Office (NVI) and the police to ask exactly how many reports they have received of misuse of personal data, i.e. falsification of recommendations, and which party or parties were typically involved.

The National Election Office replied that they did not have the requested data, but the police was able to provide us the information we needed:

However, further details, such as the names of the parties involved in the cases, were not provided.

Recently, the press has been flooded with stories of how some parties have been using forged signatures and stealing the personal details of voters.

A recurring common thread in the suspicious recommendations is that they mostly concern candidates of George Gődény’s party. There have also been cases where deceased people’s details were included on the recommendation forms, and in some constituencies – such as in Budapest 6 – such a high number of invalid signatures were found that the candidate was eventually banned from the contest.

The press and opposition politicians also reported on cases in the countryside as well: in several counties, forged recommendations were found on the papers – sometimes almost half of the recommendations submitted were false.

What is more, in the case of the Workers’ Party and ISZOMM (Tibor Szanyi’s party), recommendations from well-known Fidesz members in Szombathely were found, without which the required 500 recommendations would not have been reached.

Hungarian Two-Tailed Dog Party (MKKP) destroyed a total of 5000 signatures because of this. “Against our will, we have seen into the caverns of Hungarian politics. Mafia-like methods were used to frame the party candidates with recommendations from Fidesz members, often dead people.

We were on time and revealed how Fidesz’s system of recommendations works,” the party said.

Anyone can check which candidate they have supported

The problem of forged signatures could be noticed during thein previous elections. In 2018, several of our readers contacted us alleging that fake parties had misused their data when collecting signatures in elections.

After the election, we reported that 111 criminal prosecutions had been launched nationwide for forged signatures, but in most cases the investigation had been unsuccessful.

The collection of false signatures is a favourite tool of fake parties, which they use to raise millions in public funding – without any real political performance. Parties can obtain public funds in two ways.

There is one condition: prospective candidates need the signature of 500 citizens who support their candidacy to enter the race. Unknown, recently founded ’fake’ parties with no existing organizational structure have a hard time collecting them, which is why many of them simply bought citizen’s data and forged signatures.

Theoretically, parties that do not achieve 1% in elections, have to pay back the state funding, but past examples show that this is not always possible.

Transparency International Hungary and Political Capital calculate that in 2018, fake parties took HUF 3 billion in public money, and a large part of the debts proved to be irrecoverable.

This year every citizen can check online which candidate he or she has recommended in the election, so it became easier to discover forged signatures and other irregularities. 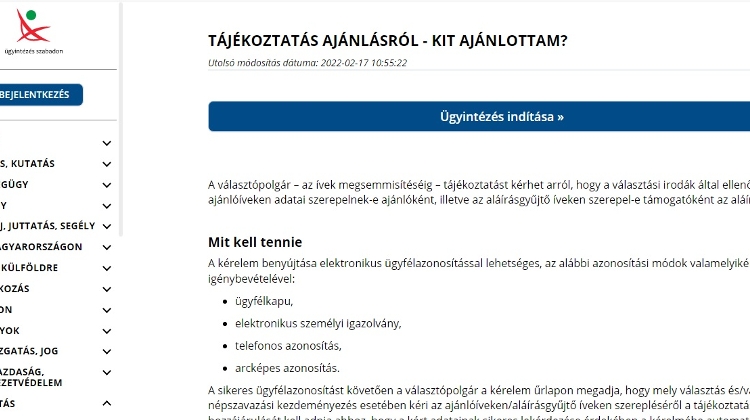 If someone finds their own data and forged signature with parties they never supported, there are three things that they can do:

* filing a complaint to the local electoral commission is the first step, however, there is a time limit for appealing, which is already closed for ’22 election.
* You can file a complaint with the police against an unknown perpetrator for misuse of personal data, and offence against the electoral law. However, due to the slow pace of the investigation,  the candidate may be able to participate in the election in the end – despite the false recommendations.
* If you are not satisfied with the response of the election office, you should also contact the National Authority for Data Protection and Freedom of Information (NAIH).

Written and translated by Zita Szopkó. The original, more detailed Hungarian version of this article can be found here.