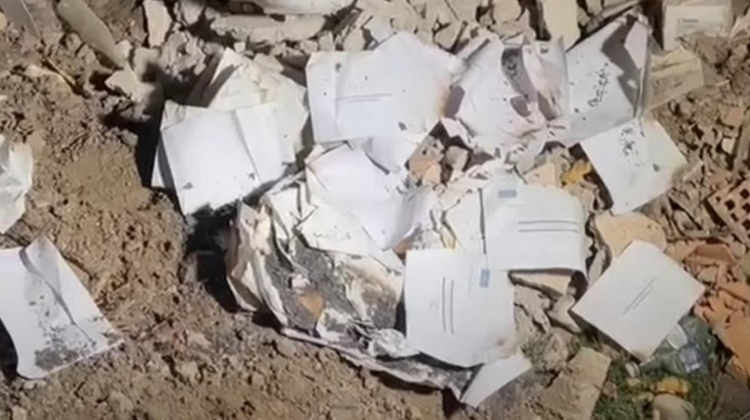 A bag containing partially burnt Hungarian election postal ballot papers was found in a landfill near Târgu Mures, according to a report by news site Telex.hu.

The bag was found by a local journalist working at Punctul.ro, who was tipped off by an anonymous reader.

The journalist went to the illegal waste dump in the municipality of Jedd near Târgu Mures and recorded his findings.

Pictures taken by the journalist show that the ballot papers had been filled in. One ballot paper shows a vote for the opposition coalition United for Hungary, while another shows that a voter cast his vote for the Our Home party (Mi Hazánk).

The journalist said that he did not touch the bag, left everything at the scene, and informed the police about the incident. The police then arrived and collected the ballots as evidence, Telex reports.

According to another report by Hvg.hu, every ballot seen by its reporter on the scene was filled out with a vote for the opposition.

Hungarians without a permanent Hungarian address living abroad who have registered by March 9 can vote by mail in this year's parliamentary elections.

Márki-Zay calls for annulment of postal votes from abroad

United for Hungary candidate for prime minister Péter Márki-Zay called for the annulment of postal votes on Facebook after he learned of the incident.

"We've caught them now: discarded ballot papers have been found in a landfill near Târgu Mures in Transylvania. We always knew that they were cheating in the elections, but now everyone can see the means by which they cheat.

More and more people in Transylvania seem to think that Fidesz has to go. And they are so afraid of defeat that they are not afraid of even the most obvious fraud: they literally wanted to make a mess of the will of the electorate," he wrote.

"The desperate left is capable of anything despicable," Fidesz responded to the opposition's accusations of electoral fraud in a statement sent to state news agency MTI, claiming that it was the opposition who burned the ballots in order to destroy the votes of Hungarians living abroad.