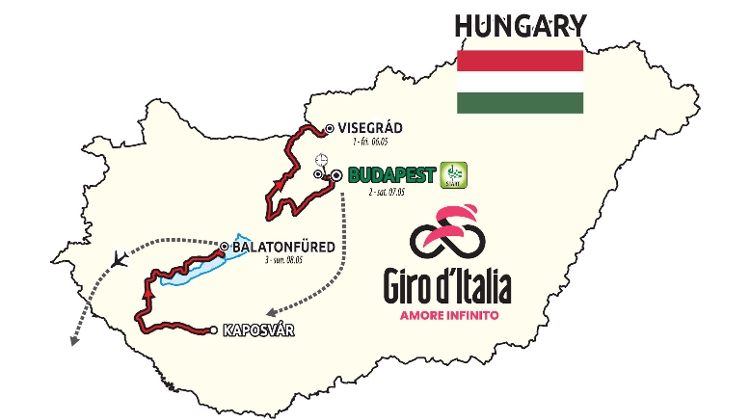 The 105th edition of the Giro d’Italia will welcome Hungary as the host nation for its Grande Partenza.

After changes to the race route in 2020 due to the pandemic, which originally foresaw the start of the 103rd edition from Budapest, the race will now commence from the Hungarian territory.

The Grande Partenza will feature three stages, including an individual time trial.

It begins on Friday May 6 with the Budapest-Visegrád stage (best suited to sprinters). Then, on Saturday May 7, a 9.2 km individual time trial through the heart of Budapest follows.

The last stage in Hungary will take place on Sunday 8th May from Kaponsvár to Balatonfüred, on the shores of Balaton Lake and is one for the sprinters.

The riders will then transfer to Italy and, on Monday 9, the Corsa Rosa will observe its first rest day.

A slightly undulating stage through the plains to the north of the capital, skirting the Slovakian border, marked by the Danube, an imposing and constant presence in this area.

The stage passes through several renowned towns such as Székesfehérvár and Esztergom with its imposing basilica.

A challenging finish awaits the riders once they leave the banks of the Danube. From the centre of Visegrád, the route climbs at 5% for about 5km to the royal castle where the first Maglia Rosa will be awarded at the end of an increasingly narrow sprint.

A time trial entirely following a city circuit that stitches together the Hungarian capital from Pest to the historical centre of Buda.

The start is located at the Heroes’ Square and heads straight for the Danube, which separates the two ‘souls’ of the city.

A series of twists and turns mark the route until it reaches the riverfront and parades past the neo-Gothic parliament before crossing the Danube and following the parallel bank.

Leaving the river behind, the final climb begins (with peaks of 14% in its first section) which, partly on cobblestones, leads to Buda Square where the finish line is located.

Stage to Lake Balaton, the sea of Hungary. After a first section of the stage in which the riders will approach the lake via a series of gentle undulations, they will reach Nagykanizsa and then Hévíz with its thermal lake.

From there, they will ride through the Balaton region. The landscape is called the ‘Provence of Hungary’ and features ‘up and down’ volcanic hills that characterise the route.

The last 50km take place along the coast with only the briefest of bumps at Tihany Abbey. The finish is almost without corners, and will set the stage for the race’s first bunch sprint.