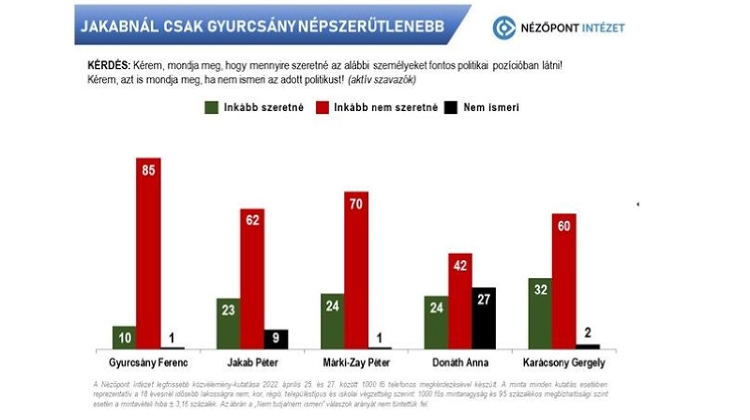 Péter Jakab, on the cusp of re-election as the Jobbik party’s leader, has been outdone in the unpopularity stakes only by Ferenc Gyurcsány, the former Socialist prime minister who now leads the Democratic Coalition, according to a survey by the Nézőpont Institute.

Only 23% of active voters thought Jakab should fill a top post, the survey published on Saturday found.

Asked the same question about Gyurcsány, only 10% would entrust him with a position of responsibility.

Nézőpont said that Jobbik’s support base had also waned since the election four years ago, when 20% of voters backed the party. Now, Jobbik would only capture 3% of voters in an election held this Sunday, it added.

Meanwhile, Péter Márki-Zay, the former prime ministerial candidate of the united opposition who is the mayor of Hódmezővásárhely, and Anna Donáth, the leader of Momentum, each captured 24% of active voters in Nézőpont’s poll, though 70% would not entrust Márki-Zay with a position of authority, while 42% responded the same way when it came to Donáth — whose name recognition is low, with 27% of active voters unsure who she was. A

mong left-wing leaders, Gergely Karácsony, the mayor of Budapest, who is giving up his position as leader of the Párbeszéd party, is the most popular (32%). Nézőpont conducted its representative survey of 1,000 adults by phone from April 25 to 27.