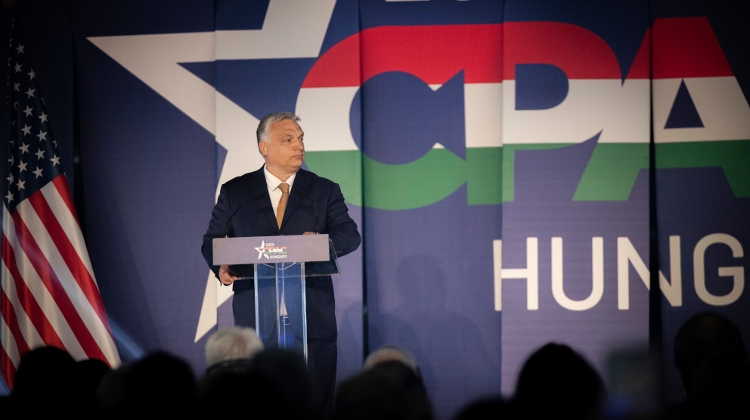 Hungary is "a laboratory where an antidote for progressive dominance has been developed", Prime Minister Viktor Orbán said in his keynote speech to the Conservative Political Action Conference (CPAC), which started in Budapest on Thursday.

Referring to the ruling Fidesz-Christian Democrat parties’ fourth consecutive election win, Orbán said the country “has been given the fourth dose, and I can report that the patient has made a full recovery”.

Orbán said Hungary’s “formula against progressive dominance” was free for any other country to use. The first point was to “play according to our own rules, because we can win only if we don’t accept solutions and routes offered by others,” Orbán said.

National conservatism is another key aspect, he said. “The national cause is not an ideology or a matter of tradition.” Governments have to stand by their voters at all times, “which is why we decided to stop migration and build a wall on the southern border: Hungarians said they didn’t want illegal migrants”.

“Progressives want to force their pipe dreams on society, but people do not like leftist fever-dreams in important issues,” he said. The third point, Orbán said, was abiding by national interests. “Hungary first, America first” — foreign policy should be defined by national interests, he said.

In a keynote speech to the Conservative Political Action Conference now under way in Budapest, Prime Minister Viktor Orbán said modern Western media was a “sounding board” for leftist ideas. “We can only show the madness of progressive leftists if we have a media to help us,” he said.

A next step is to “reveal the intentions of our opponents,” he said. “We in Hungary make the left’s intentions public before they even do it.” That is what happened with “LGBTQ propaganda targeting children”, Orbán insisted.

“This is a new thing here, but we brought it to light and held a referendum on it,” with an overwhelming majority of Hungarians rejecting the “sensitising of children”, he said. “By unveiling their intentions ahead of time, we put the leftists on the defensive, and ultimately they had to admit that this had been their intent all along,” he said.

An economy benefitting people by providing jobs and opportunities “to get ahead in life” is another key aspect of “any right-wing government, we are doomed to fail if we cannot provide all that,” he said.

A centrist attitude is key to keeping voters, Orbán said. “By peddling conspiracy theories, we may gain popularity on internet forums … but we will distance the majority of our voters, get sidelined and ultimately lose,” he said.

Faith is essential, Orbán said. “If one doesn’t believe in a final accounting and that they will have to account for their deeds before God, they will feel they can do anything they have the power to do.” Meanwhile, politicians also have to find friends, he said. “If we want to get by in politics, we always have to look at what we have in common with others, rather than our differences.”

By the same token, conservative politicians cannot be successful without functional communities. The smaller the community and the lonelier the people, the more will vote for the liberals, he said. Institutions built to survive individual politicians will “stay with us for generations” and renew politics, he said.

Orbán called 2024 a “decisive year”, which will see a presidential and congressional elections in the United States and a European parliamentary election in Europe.

“These two scenes mark the two fronts of the battle for western civilisation,” Orbán said, adding that “neither of the two are yet in our hands, though we need both”. “We have two years to prepare,” the prime minister said.

“The Hungarian lesson is that there is no magic formula to apply, there is only work,” he said.

Former Republican senator Rick Santorum, British politician Nigel Farage, and Eduardo Bolsonaro, the son of Brazilian President Jair Bolsonaro, in their addresses to the Conservative Political Action Conference (CPAC) in Budapest on Thursday, emphasised their faith in God and their values based on patriotism and the family.

Santorum said people today were focused on their own pleasures and considered marriage and having children things that limited their freedom. He voiced agreement with Prime Minister Viktor Orbán’s view that faith should be treated as a priority. He congratulated Hungary on its support for families and the church by having the courage to speak the truth.

In a video message to the conference, Nigel Farage, former leader of the UK Independence Party, praised Hungary’s achievements. “We all want to work together as sovereign states,” he said. “We’ll have different views on things.

We’ll have different views, perhaps, about Russia, about oil,” he added. “But, we have common values. We believe in the integrity of our societies. We believe in the Judeo-Christian culture that underpins literally everything that Western civilisation represents, and we know we’re fighting a war against those who want to destroy everything. And it’s those things that bring us together in unity.”

Eduardo Bolsonaro, a member of Brazil’s Chamber of Deputies, said in a video message that CPAC Hungary was the right place for conservatives to discuss what they wanted to accomplish. Bolsonaro said that “very sadly”, conservatives were only in power in Hungary, Brazil “and some other few countries”.

This, he said, showed that the “lies” of the left were working. “Because if we have the opportunity to say the truth, we will win all the debates and we will bring liberty to all of the countries,” he said.

State secretary for international communications and relations Zoltán Kovács said reality was the most important ally for conservatives. “Our social policies, political preparatory work, political decision making and implementation rely on reality, the assessment of reality and its resonance with society,” he added.

The “unprecedented” two-thirds victory at the election this spring has proven that the path chosen and the realisations made could be instructional.

Former Czech President Václav Klaus said Hungary’s example had proven that victory was possible with conservative politics, which he described as “inspiring”. He said it was important to protect the “fragile West” from internal intellectual enemies and the war in Ukraine has again proven that all military conflicts result in the oppression of freedom and the spread of propaganda.

US House of Representatives Mike Waltz said in a video message that more people had died in the world as a result of Communist regimes than in the name of any other ideology.

Despite this, more than 30% of young Americans have a favourable opinion of Communism, he said. They have no idea that Communist regimes have destroyed the lives of hundreds of millions, he added.