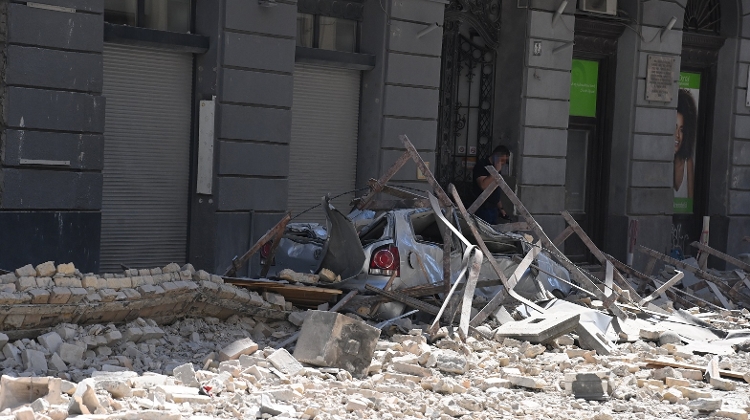 The roof and upper part of the facade of a five-storey building collapsed onto the street at the corner of Aradi and Jókai utca in the Sixth District at 9:45 on Monday morning.

Several people were injured, many cars were damaged and five vehicles were completely crushed.

Fire-fighters examined the damaged cars with sniffer dogs but found nobody in them, nor in the damaged flats.

Four people who happened to be on the street, two of them dancers at the nearby Operetta Theatre, were injured and were taken to hospitals by paramedics.

One dancer was hospitalised with spinal injuries. She was operated on, but may be paralysed from the waist down.

Residents will have to move out of the building, at least temporarily, as it might collapse, HVG reports.

He said those affected could move to empty council flats temporarily, if necessary, but it is hoped that the building can be restored within a short time.

Construction work has recently been carried out on the attic, where luxury apartments are to be built.

A dancer suffered serious injuries on her way to the Budapest Operetta on Monday when segments of a rooftop under construction and building frontage collapsed onto the pavement at the corner of Jókai Street and Aradi Street morning.

The dancer has been taken to hospital, the Operetta said. Pál Győrfi, the spokesman of the National Ambulance Service, told public TV that four injured received treatment.

At the construction site, a 50m wall segment fell to the pavement from the top of a five-floor building. Debris fell onto pavement and several cars parked in Jókai Street.